The transactions happened within three months in 2021. The property, adjacent to the Ramjanmabhoomi in Ayodhya, was valued at Rs 35.6 lakh by the local authorities.

It’s a prime property of 890 sq meters, a piece of land where the grand Ram temple complex will soon come up. Until February this year, it belonged to a mahant, Devendra Prasadacharya. On February 20, one Deep Narayan bought the land – gata number 135 – from the mahant for Rs 20 lakh.

Narayan is the nephew of Rishikesh Upadhyaya, the Bharatiya Janata Party leader who is the mayor of Ayodhya. Land records accessed by Newslaundry show that three months later, on May 11, Narayan sold the property to the Ram Janmabhoomi Trust, set up by the Narendra Modi government to oversee the temple’s construction, for Rs 2.5 crore.

All this while, the property’s circle rate – the minimum amount of sale decided by local authorities – remained Rs 35.6 lakh.

The records locate the property at Kot Ramchandra, Haveli Awadh, under Sadar tehsil in Ayodhya. According to the property map in the records, and checked by Newslaundry on the ground, it’s adjacent to the so-called Ram Janmabhoomi.

Newslaundry confirmed the details of these transactions from the website of the Integrated Grievance Redressal System, Uttar Pradesh, or IGRS UP. While the transaction certificate states that Narayan purchased land from Prasadacharya on February 20, 2021, a digital summary of the transaction erroneously puts it on February 22, 2021.

The details of the two transactions on the IGRS UP website.

In price rate terms, Narayan bought the land at Rs 2,247 per sq metre from Prasadacharya and sold it at Rs 28,090 per sq metre to the temple trust. The circle rate in Kot Ramchandra is Rs 4,000 per sq metre.

Narayan’s Facebook profile describes him as an “active member” of the BJP.

Anil Mishra, a trust member, is listed as a legal witness for the transaction on May 11, when the trust, documents show, paid Narayan Rs 2.5 crore through RTGS. Narayan’s February 20 purchase names Ved Narayan Pandey and Pawan Tiwari as witnesses.

The day Narayan bought the 890 sq metre property from Prasadacharya, he also sold another piece of land – gata number 36M – in Kot Ramchandra to the temple trust for Rs 1 crore. This parcel, which covers 676.86 sq metres, was sold at a rate of Rs 14,774 per sq metre. At a circle rate of Rs 4,000 per sq metre, this property – 500 metres from the temple complex – is valued at Rs 27.08 lakh. Mishra was once again the legal witness to this purchase.

The details of the Rs 1 crore transaction on the IGRS UP website.

The temple trust’s shopping spree in Ayodhya is at least partly financed by crores of Indians who donated money for the construction of the temple during a “collection drive” by the Sangh Parivar in early 2020.

The details emerge at a time when the trust faces allegations of fraud and corruption by the Aam Aadmi Party and the Samajwadi Party over the purchase of 1.2 hectares of land in Bagbijaisi village for Rs 18.5 crore from Sultan Ansari and Ravi Mohan Tiwari, who had bought it for Rs 2 crore from Harish and Kusum Pathak minutes before on March 18, 2021. The circle rate valued this property at Rs 5.8 crore.

On March 18, the temple trust also directly bought 1.03 hectares of land at Bagbijaisi from the Pathaks for Rs 8 crore.

Newslaundry reported earlier this week that Harish Pathak is an absconding fraudster who is facing multiple cases of cheating, forgery and impersonation across Uttar Pradesh.

Rishikesh Upadhyaya, extreme left, and Champat Rai, second from left, collect donations for the Ram temple in Ayodhya in February this year. Photo via Facebook

The land purchase in Kot Ramachandra follows the pattern of the deal at Bagbijaisi. The sellers – Harish Pathak and Prasadacharya – sold land to a relative of mayor Upadhyaya – Ravi Mohan Tiwari and Deep Narayan, respectively – at a price below the circle rate. The relatives in turn sold it at an inflated rate to the temple trust.

After controversy erupted over the Bagbijaisi land deal, the temple trust claimed that Tiwari and his associate Sultan Ansari had bought the land for only Rs 2 crore because of an earlier agreement between Tiwari, Ansari and Harish Pathak.

Mayor Upadhyaya neither denied nor confirmed his familial relation to Deep Narayan to Newslaundry. “I do not need to clarify. All of Ayodhya is related to me,” he said. “These allegations are politically motivated because the state elections are around the corner.”

Asked about Narayan’s sale and purchase of gata number 135, Upadhyaya said only Narayan and the temple trust would be able to comment on the deals. “The transactions are clean,” the mayor claimed. “A mountain is being created out of a molehill.”

The temple trust’s general secretary, Champat Rai, and trustee Anil Mishra did not respond to multiple calls for comment.

Newslaundry sent a set of questions to Narayan. This piece will be updated if we receive a response. 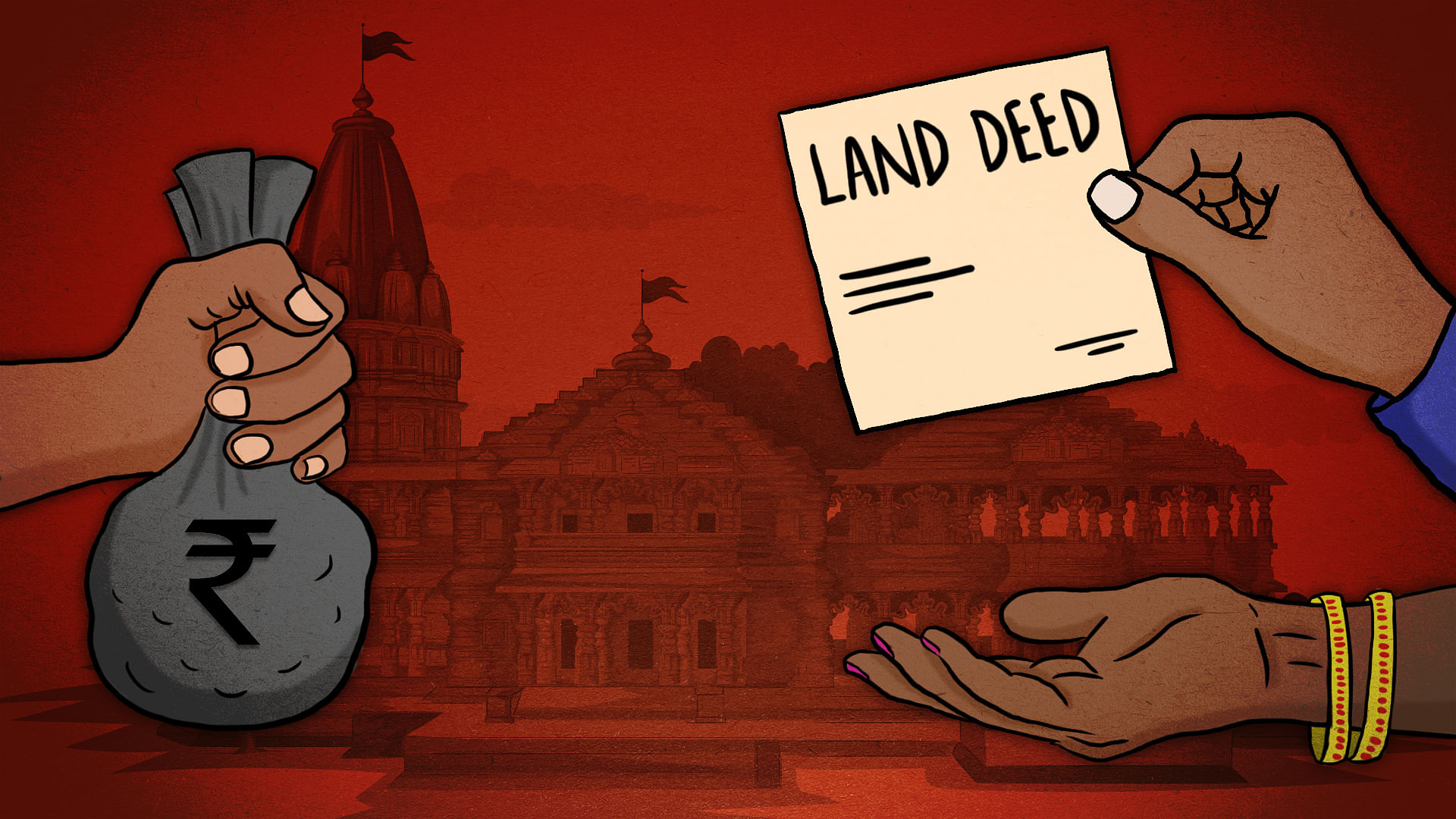