Inquiry ordered by Ayodhya’s district magistrate found that the man who had tenancy of the land didn’t have the right to sell it to Deep Narayan.

On June 21, officials in Ayodhya district’s land records department gathered around a table with battered registers and old maps. They had been asked by district magistrate Anuj Kumar Jha to trace the ownership of land number 135.

Last week, Newslaundry reported that 890 square metres of this property were bought for Rs 20 lakh by Deep Narayan, nephew of Ayodhya’s BJP mayor Rishikesh Upadhyaya, in February this year and sold to the Ram Janmabhoomi Trust for Rs 2.5 crore in May.

After leafing through the registers for hours, the officials told Jha, himself a member of the temple trust, that the land is owned by the government.

A report prepared by the department, accessed by Newslaundry, said a mahant named Vishwanath Prasadacharya had the tenancy of the land, “but he does not have the right to sell this land”.

The late Vishwanath Prasadacharya was the guru of Devendra Prasadacharya, who sold the land to Narayan in February. The property, which is adjacent to the purported Ram Janmabhoomi, is located in Kot Ramchandra, in the district’s Sadar tehsil.

Two officials in the land records department confirmed the contents of the note, adding that it was prepared after Jha ordered an internal inquiry. The details were found in Sadar tehsil’s annual land records for the agricultural year 1425, or 2017-18 in the Gregorian calendar.

The land records department in Ayodhya.

What the report found

The report stated: “In tehsil’s yearly land records for crop year 1425, gata number 135, 142, 129 and 201 are registered in the ownership of the nazul [government] and class 4(c) hereditary tenancy is registered in the name of mahant Vishwanath Prasadacharya, protege of Ram Kripalacharya, resident of bada sthan, Ramkot, Ayodhya. This land’s class 4(c) hereditary tenants do not have the right to sell the land. The owner is registered as nazul which makes it clear that this is government land.”

While it’s not clear when Vishwanath died, the tenancy of the land then passed to his protégé, Devendra.

On Sunday, Devendra Prasadacharya told Aaj Tak that mayor Upadhyaya had persuaded him to sell the land for the construction of the Ram temple.

“I was told this land would go to the trust,” he said. “I thought since it belongs to the government, any price for it is good for me. So I sold it for Rs 30 lakh.”

Rs 30 lakh is the sum of two transactions. On February 20, Devendra sold 890 square metres to Deep Narayan for Rs 20 lakh. On the same day, he sold another 370 square metres to one Jagdish Prasad for Rs 10 lakh. Both portions of land are part of land number 135.

In its report, the land records department also outlined a history of land 135’s ownership. In 1931, it said, the land had been registered in the “maalik-e-ala” of mahant Raghuvir Prasad, a protégé of one Ram Manohar Prasad.

During the British Raj, the colonial government gave “maalik-e-ala” status to certain occupiers of government land. A “maalika-e-ala” had the right to sell the land.

In another register of government land, the report said, land numbers 131 to 135 were not listed “because this land is registered in the maalik-e-ala of mahant Raghuvir Sharan Prasad, protege of Ram Manohar Prasad”.

The report stated that in a third register recording patta holders, one Ram Sharan was the registered owner of land number 135 between 1914 and 1933. His son, Ganesh Prasad, was listed as the owner of 11 bissa – a local unit of land measurement, equivalent to 1,380 square metres – of this property between 1957 and 1963.

The total area of the land is not mentioned in the inquiry report or the sale deeds.

Now, the story gets even more complicated.

Brijmohan Das is a mahant at Dashrath Gaddi in Kot Ramchandra. Das told Newslaundry that he has looked after 10 bissa – approximately 1,255 square metres – of land 135 for many years.

“The government owns this land,” he explained. “Mahant Vishwanath [Prasadacharya] was its occupier and my guru, Ram Ashreydas, was the co-occupier. After their deaths, it passed on to their respective protégés: Devendra Prasadacharya and me. I have looked after Devendra’s chunk of the property too.”

Brijmohan Das at his temple in Ayodhya.

Brijmohan Das at the property in April this year.

“He said this land is owned by the government and will be given to the trust,” Das told Newslaundry. “I handed it over without hassle only because I am a devotee of Shri Ram.”

Das claimed that he did not know that the land had already been bought by Deep Narayan in February. “The way they are deceitfully capturing properties, these people are worse than Babar,” he said, referring to the Mughal emperor who Hindutva’s followers believe had the Babri Masjid built atop a temple marking the birthplace of lord Ram in Ayodhya in the 16th century.

What the DM says

Newslaundry met Anuj Kumar Jha, Ayodhya’s district magistrate, to discuss the findings of the internal inquiry. When asked what action the administration had taken, Jha said, "We have not received any complaint yet. If there is any complaint, we will take action."

If the land is owned by the government, shouldn’t the administration file a complaint? “It is government land but it has been given on lease,” Jha said. “Both maalik-e-ala and patta holders have the right to sell the land, even if it is owned by the government. If they come to us today and say that someone has sold our land, only then can we take any action. What action should we take now?"

The “maalik-e-ala” and patta-holding ownership referred to by Jha, and mentioned in his report, was only active between 1914 and 1963. While he acknowledged this, he refused to comment on the other finding: that Devendra’s guru, Vishwanath Prasadacharya, was the hereditary tenant on government land as late as 2018, and that his protégé had no right to sell it.

Ayodhya mayor Rishikesh Upadhyaya did not respond to calls for comment. 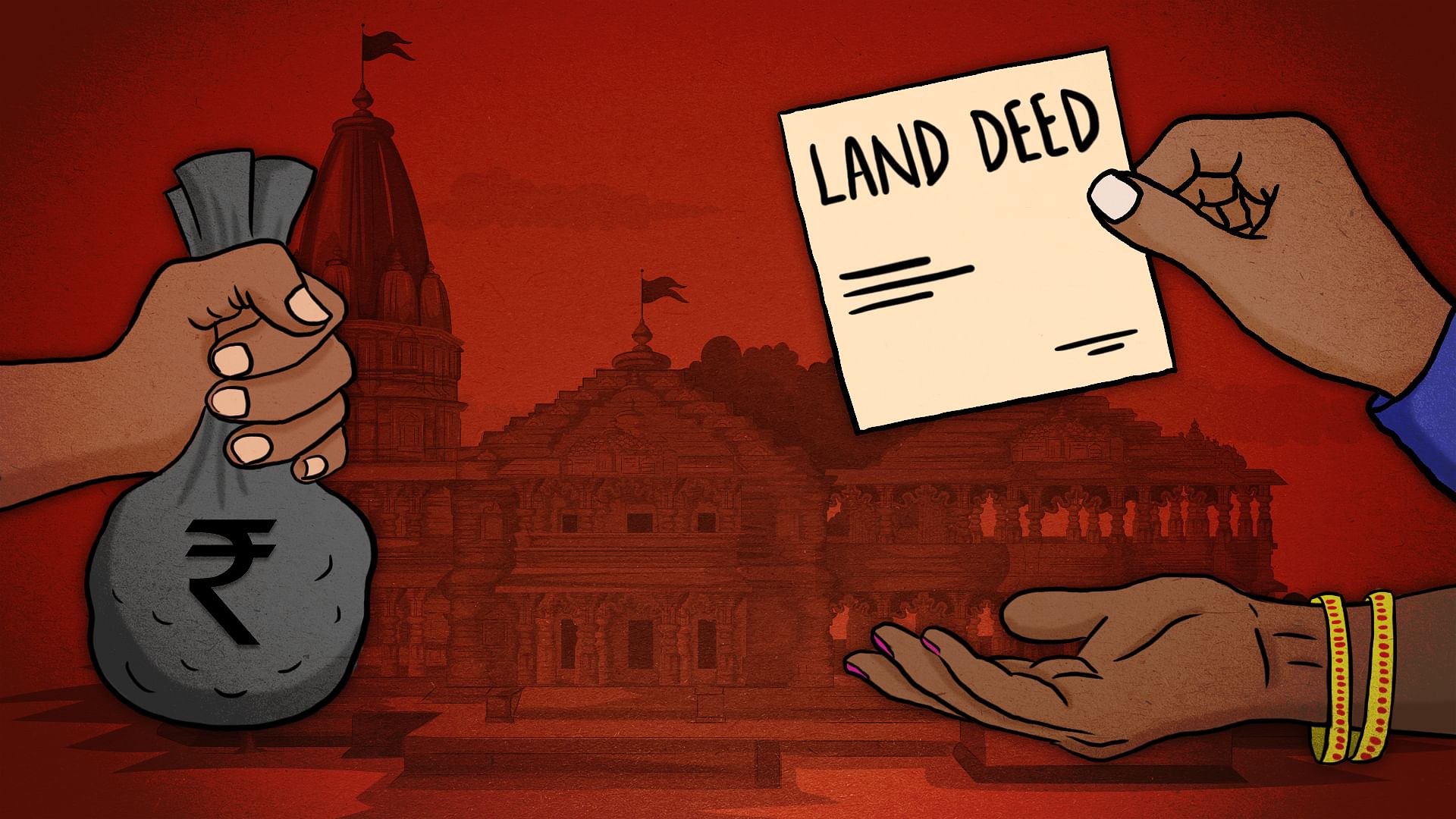