For want of a toilet, a Mumbai boy had to die

In the densely populated Shivaji Nagar slum cluster, there is one toilet seat per 145 people.

Mohammad Akbar Shaikh’s neighbors remember him as a child who never picked fights with anyone. He was friendly with everyone in the neighborhood. Which is why, after his tragic death on August 3, his mother said that the whole neighborhood cried for him.

According to Mohammad’s Aadhar card, he was 17 years old, though his mother said he was 15. In a selfie taken on Eid last month, he looked even younger.

On the morning of August 3, Mohammad left his house at around 8 am to use the toilet. He lived with six family members in one of the shanties lining the narrow lanes of Sanjay Nagar area in Govandi’s Shivaji Nagar in Mumbai. The slum pocket, with a predominantly Muslim population, is located on the banks of the Deonar dumping ground, Asia’s largest landfill that receives around 9,000 metric tonnes of waste per day.

Like most young people in the area, Mohammad would defecate near a nullah, or drain, filled with garbage that overlooked the dumping ground.

This part of Sanjay Nagar has only two public toilets, both of which are at least 10-15 minutes away from Mohammad’s home. Additionally, the toilets are crowded and pay-to-use so, just like any other day, Mohammad set off for the nullah to do his business.

But he never returned.

The nullah filled with garbage.

According to a preliminary police report, Mohammad slipped and fell in the nullah. It took an hour for someone to sound the alarm and for him to be pulled out. The man who rescued him couldn’t even see Mohammad through the garbage; he had to feel around for the body with his foot. Locals then tied their dupattas and vests together to haul him out.

Mohammad was still breathing at that point. By the time they got him to Shatabdi hospital, around 4-5 km away, he was dead.

“He would tell me, ‘You be good, mother’. He’d say I shouldn’t worry about anything as he was there to take care of all our expenses,” said his mother Mumtaz Shaikh. “Now, who is there to look after me?”

Mohammad was the only member of the family earning a steady income of around Rs 250 a day. His parents are unwell and his siblings are too young to work. So, he did it all. Like most of the others living in the area, he worked as a ragpicker, collecting items from the landfill and selling them.

A senior police inspector investigating the matter told Newslaundry that Mohammad’s death has been ruled as accidental; the police report lists the cause of death as “accidental drowning”.

But local community groups and NGOs have written to the municipal body and approached the police, urging them to look into a factor that could have prevented Mohammad’s death – adequate toilets.

A scarcity of toilets

The central government’s Swachh Bharat Abhiyan programme says there must be at least one toilet seat per 25 women, and one per 35 men, in community public toilets. But in Shivaji Nagar, there is one toilet per 145 people, as per NGO Apnalaya’s findings from 2018.

The survey found that the toilets either do not have water, doors, or electricity, or are managed by corporators and require people to pay Rs 2 per use.

Last year, Maharashtra’s state human rights commission had taken cognizance of the situation and directed the municipal body to formulate a scheme to increase the number of toilets in this area. Human beings, the commission had said, cannot be deprived of their constitutional right to live with honour and dignity.

But the situation has barely improved.

Shivaji Nagar is home to around six lakh people, or nearly 12 percent of Mumbai’s slum population. Using the limited number of community toilets in peak hours ensures a long waiting period, sometimes upto an hour. Paying to use the toilet is also tough on residents.

The pay-per-use community toilets about 10-15 minutes from Mohammad's home.

“If there are 10 people in a household, Rs 20 is gone just to use the toilet once,” said Shahjahan Mirza, a resident of Shivaji Nagar. “The more you go in a day, the more you spend. Ladies, men, kids – most people end up going to the dumping ground.”

Mumbai was certified open-defecation free in 2017 by the Quality Council of India, a government regulator, although the reality is far from that.

According to Biju Bhosle, president of the Mahila Mandal Federation, one of the organisations that approached the authorities about Mohammad’s death, the extreme poverty of the people living here must be considered when it comes to pay-per-use toilets.

“The money they get from working as ragpickers is barely enough for food. What should such people do? Should they eat or should they pay for the toilet?” she asked, adding that action against authorities must be taken to ensure this doesn’t happen in the future.

Newslaundry also spoke to Mehtab Shaikh, a member of the Khwaja Garib Nawaz Nav Jawan Committee, constituted by residents of Shivaji Nagar’s Sanjay Nagar. The committee, formed over seven years ago, teaches children in the locality and offers help to residents when problems arise.

“We wrote to the BMC saying there should be toilets on the backside too,” said Mehtab, referring to the area where Mohammad lived. “Many such incidents happen as there are no bathrooms nearby and kids go to the dumping ground.”

Challenges of space and a high population

Life is cheap in Shivaji Nagar. Owing to its proximity to the dumping ground, the residents suffer from multiple health issues like malnutrition, tuberculosis, and respiratory problems. The life expectancy rate here is 39, as opposed to an urban life expectancy of 73.5 in Maharashtra.

The M East ward, where Shivaji Nagar is located, also has the lowest human development index in the city out of a total of 24 wards.

Last year, Mohammad’s neighbour, a young boy, died by electrocution. The boy’s mother, Salma Chaudhary, remembers how Mohammad had told her not to worry and that he’d take care of her.

The morning that he died, Mohammad had left home with a small plastic box, which he used as a lota. Though he usually defecated in an area next to his home, he had walked a little further that morning. His family isn’t sure why.

His grandmother, Aasma Khatum, told Newslaundry about how Mohammad would work and also take care of his siblings. “We are poor and now don’t know how to make a living,” she said, her voice choking. “I cry for my child. I can’t leave my daughter and go back to my village now; she weeps everyday.”

But why aren’t more toilets being built in Shivaji Nagar?

Kiran Dighavkar, Mumbai’s Swacch Bharat nodal officer, said the high population is one of the obstacles.

“Space is a major constraint. The population keeps increasing and so, we have to increase the infrastructure as well,” he said. “It is an unplanned settlement, which is another challenge.” Dighavkar added that 17,000 more toilet seats will be constructed within the next two years, including in the M East ward where Shivaji Nagar is located.

Right to Pee, an NGO-driven campaign to ensure free, clean, safe public urinals in the city, mapped the 501 community toilets in the M East ward. They found that the toilets had unhygienic conditions, water shortage, and long queues, as well as overflowing mobile toilets.

While Right to Pee has been active for 10 years, its focus now is on M East, which it found to be the worst off in the city in terms of community toilets. Supriya Sonar, Right to Pee’s convenor, said that instead of pay-per-use toilets, the municipal body should bring in a monthly pass system, where families can pay Rs 50-100 per month to allow all family members to use a toilet without any additional costs.

The assistant to local corporator Fahad Azmi told Newslaundry that a survey was being conducted in the area so the monthly pass system could be implemented soon. Meanwhile, he said they had reached out to Mohammad’s family and provided them with rations for a few months.

Newslaundry also reached out to Mahindra Ubale, the BMC official in charge of M East ward. Ubale said he wasn’t aware of Mohammad’s death and would look into it. 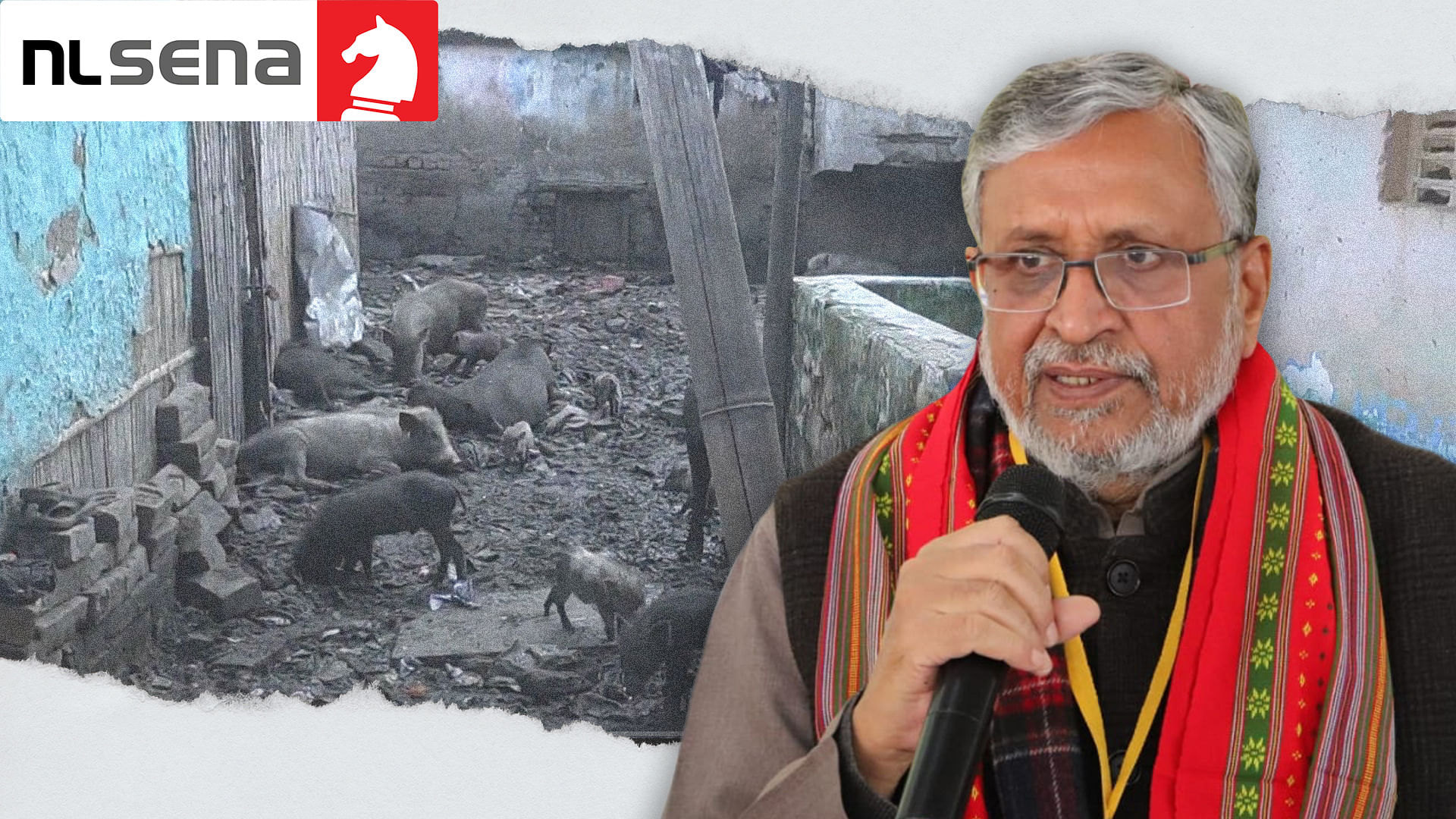