‘Sisterhood across borders’: The story of India’s pandemic as told by its women journalists

A series by Gather Sisters had 40 women journalists from 30 states telling their stories. In the process, they spotlighted issues and shattered stereotypes.

Sikkim journalist Dichen Ongmu left home to avoid infecting her sister’s newborn, cut off her long hair so she could more effectively disinfect herself every night, and returned the government’s Covid incentive because she believed that some of her colleagues had pocketed it undeservedly.

A Delhi journalist completed her assignment despite the shock of having to say an online last goodbye to her beloved grandmother, whose health had suddenly worsened. Her family knew she would not abandon her work even though she would have longed to be with her grandmother in her last moments.

From May to July, 40 women journalists from 30 states held online sessions where they recounted their experiences reporting the pandemic, revealing an extraordinarily high degree of professional ethics and commitment. Many risked infection as they went into poorly equipped hospitals to tell stories of families whose loved ones were gasping for breath, or ventured into villages to find people dying of ignorance or lack of doctors or transport. Others faced abuse and threats at crematoria where they went to count bodies.

Some went beyond their professional duty, using their privilege to resolve SOS calls during the second wave. Nights were spent coordinating with bureaucrats and hospitals, and then lying awake overwhelmed with guilt for not having been able to resolve all the distress calls they’d received.

When Gather Sisters, a Delhi-based feminist group, embarked on this project called “The Moment, As She Knows It” – an oral history of Covid as seen by India’s women journalists – many logged in only to listen to a known byline. Soon, they were logging in every weekday at 7 pm, unwilling to miss out on the gripping stories they had come to expect.

The primary focus was the pandemic but thanks to questions from Gather Sisters’ organiser Tithiya Sharma and the audience, the hour-long narrations ended up including all women’s issues in their states. Which meant literally everything.

It became clear these young journalists were already looking at events from a woman’s point of view. The neglect of ASHA workers who were on the frontline of handling the pandemic ran like a thread through their narratives.

The Tribune’s Ruchika M Khanna from Punjab described the double burden the pandemic and lockdown had imposed on women: not just looking after the household but also dealing with a suddenly unemployed husband. She also spoke of how the farmers’ agitation had left women in charge of the family and fields back home.

For Haryana’s Jyoti Yadav of the Print, the defining story of the pandemic was the pregnant migrant labourer whose husband just wanted to return home, never mind if his wife delivered en route. Yadav made sure the woman gave birth at a hospital but when she ran out to inform the husband that mother and child were healthy, he burst into tears on hearing it was a girl – their fifth.

Quratulain Rehbar, a freelance journalist from Kashmir, described how the pandemic had only worsened the condition of women already under a military lockdown since August 5, 2019, when Article 370 had been abrogated. In the absence of public transport, she said, women had to walk miles to reach hospitals, afraid to take a lift from passing vehicles. Going to the nearest police station in Kashmir was a risky affair; hence, with the winding up of the state women’s commission after Jammu and Kashmir was downgraded to a union territory, there was no local recourse left for women caged at home, facing domestic violence.

Freelancer Deepthi Bathini explained the tragic fallout on women of Andhra Pradesh’s Polavaram irrigation project. With every displaced adult getting a compensation of Rs 5 lakh, non-tribal men flocked to these villages looking for brides. If compensation was delayed, so were the marriages. If the compensation never came, wives were sent back, even if they’d had a child by then.

Barely 10 years into the profession, many of the reporters who told their stories during the online interactions had already covered the most marginalised communities. Krithika Srinivasan of the New Indian Express, for instance, narrated the odds faced by Tamil Nadu’s tribal girls in entering college, a difficulty compounded by the lack of an official ST community certificate. Freelancer Chhandosree Thakur from Jharkhand, having covered many “witch huntings”, gave the slogan “Hum sab daayan hain” – we are all witches – while explaining that the killings of such women was always because men coveted the land they owned. Chhattisgarh tribal reporter Pushpa Rokade of Prakhar Samachar laid bare the continuing brutalities committed by security forces against tribals in Bastar’s “red zone” even after the change in government in the state, as also the open contempt by which tribal women were treated by non-tribal officers.

In Bihar, a completely different world was revealed by two senior journalists who explained how adolescent girls were married off overnight to strangers who would later sell them into prostitution, and how young men were abducted and forced into marriage to avoid paying dowry. “A Bihari’s life is the cheapest,” they said bitterly. So far, only one such “pakadwa vivah” has been annulled after the man approached the court.

Carving out a new state after a mass movement didn’t necessarily mean progress, revealed senior journalist C Vanaja, who had been part of the Telangana movement.

Undivided Andhra Pradesh had 36 women MLAs and six women ministers in 2014 when Telangana was carved out of it. The new state now has just six women MLAs and one woman minister. Telangana chief minister K Chandrashekar Rao’s only scheme for women was the Kalayana Lakshmi scheme wherein the moment they got married, SC/ST and minority women received Rs 1 lakh. KCR’s own obsessive religiosity was reflected in the increase in religious TV channels that promoted regressive values, Vanaja said.

Reporters from the Northeastern states revealed that matrilineal tribal societies didn’t mean women enjoyed a higher status. In Nagaland, Meghalaya and Mizoram, traditional village-level assemblies functioned in lieu of panchayats but women were not allowed to hold office in them, said senior journalist Patricia Mukhim. While the high rate of divorce here was a sign of women’s independence, one fallout was that women were left literally holding the baby, without any maintenance.

The way these close knit tribal societies nurtured their weaker sections became most evident during the pandemic. But the flip side of this was the loyalty they expected from every member, which meant women faced ostracism if they married non-tribals, and tribal journalists faced disapproval for writing critical pieces of their own societies. Mukhim, editor of the Shillong Times, had been slandered as “Jezebel” for the ethical stand her newspaper took while reporting conflicts between tribals and non-tribals in Meghalaya, and even had an FIR filed against her for a Facebook post last year wherein she asked that the law be upheld fairly in such conflicts. The FIR was quashed by the Supreme Court this March after the Meghalaya High Court refused to do so.

Mukhim wasn’t the only one maligned for upholding professional ethics. Pushpa Rokade was slandered as being close to Maoists and her colleagues were warned not to socialise with her. That, however, had not stopped her from questioning senior officers whenever she came to know that tribals had been picked up on suspicion, and persisting till they were released. After the Times of India’s Ishita Mishra exposed the measly amount of food being distributed during the pandemic to labourers in Uttarakhand, the administration swung into action to provide them rations, but also filed FIRs against her.

Not being taken seriously by male bureaucrats and politicians was a professional hazard. “Don’t bother me with silly questions” and “you won’t understand, let it be” were among the responses received. The Indian Express’s Iram Siddique, who chose to leave her comfortable job as a reporter in her own city of Mumbai and become a special correspondent in Madhya Pradesh, a state she knew nothing about, was asked how old she was by a senior politician and mocked by him for her lack of knowledge of the state.

Deepthi Bathini and the Print’s Rishika Sadam from Andhra Pradesh recounted how difficult it was to get heard as the only women in press conferences. While Jyoti Yadav had been heckled by young migrant labourers in Bihar, Bathini had plastic water pouches thrown on her while covering political rallies.

In “progressive” Kerala, members of the Network of Women in the Media, India, had to fight to get a Kerala Kaumudi staffer arrested after he barged into the home of a female colleague at night and abused her in 2019. Ironically, the harder struggle was to get the Thiruvananthapuram Press Club to remove him from his post of secretary. He was dismissed this June.

Despite all this, just how privileged young women journalists in big cities are was brought home by the Bihar journalists. Not only did the latter have to balance home and office, they also had to struggle with unsafe public transport and an atmosphere in which reports on power cuts were headlined “Bas, ek call aur aa jati hai ‘Bijli Rani’” – just one call and electricity queen is back. Their male colleagues also suggested that they translate their reports, while resenting their presence in the office late in the evening (“we were expected to be at home at that time”). This meant tremendous pressure to prove themselves capable of political and investigative reporting.

These journalists met the challenge, though at great cost to their mental health, said Rajni Shankar from UNI. Jyoti Yadav overcame an even bigger hurdle when she returned to Haryana as a jeans-clad, mobile-carrying journalist to interview the very khaps who’d forbidden jeans and mobiles for girls. She wasn’t an exception, she said; increasingly, girls were being sent to school and women in joint families were shortening their ghunghats.

Another positive development reported by many was the difference women IAS officers made to the condition of women.

Interestingly, a regular listener of the series was veteran human rights defender Tahira Abdullah from Islamabad. Far from finding the accounts difficult to identify with, she “felt right at home because it was sadly all so familiar - the patriarchal attitudes, the sexual harassment, engendering a sense of sisterhood across borders.”

When Gather Sisters conceived of this series, the second wave was at its peak. Certain that citizens were being lied to, and there would be no accountability, the group decided to hear the truth from eyewitness accounts of people they could trust. Given their network, it wasn’t difficult to find a diverse mix of reporters, the only criteria being that they be “newshounds” with the “insight and courage to counter the official narrative”. None of them were paid.

The series, said Tithiya Sharma, left her feeling that “it’s a dangerous time to be a woman reporter. And yet, she persists! I don’t think women journalists get the credit and appreciation they deserve.”

As journalists put themselves on the frontlines, and at risk, to bring you stories from the ground, it’s more important than ever to support them. Pay to keep news free, and subscribe to Newslaundry today. 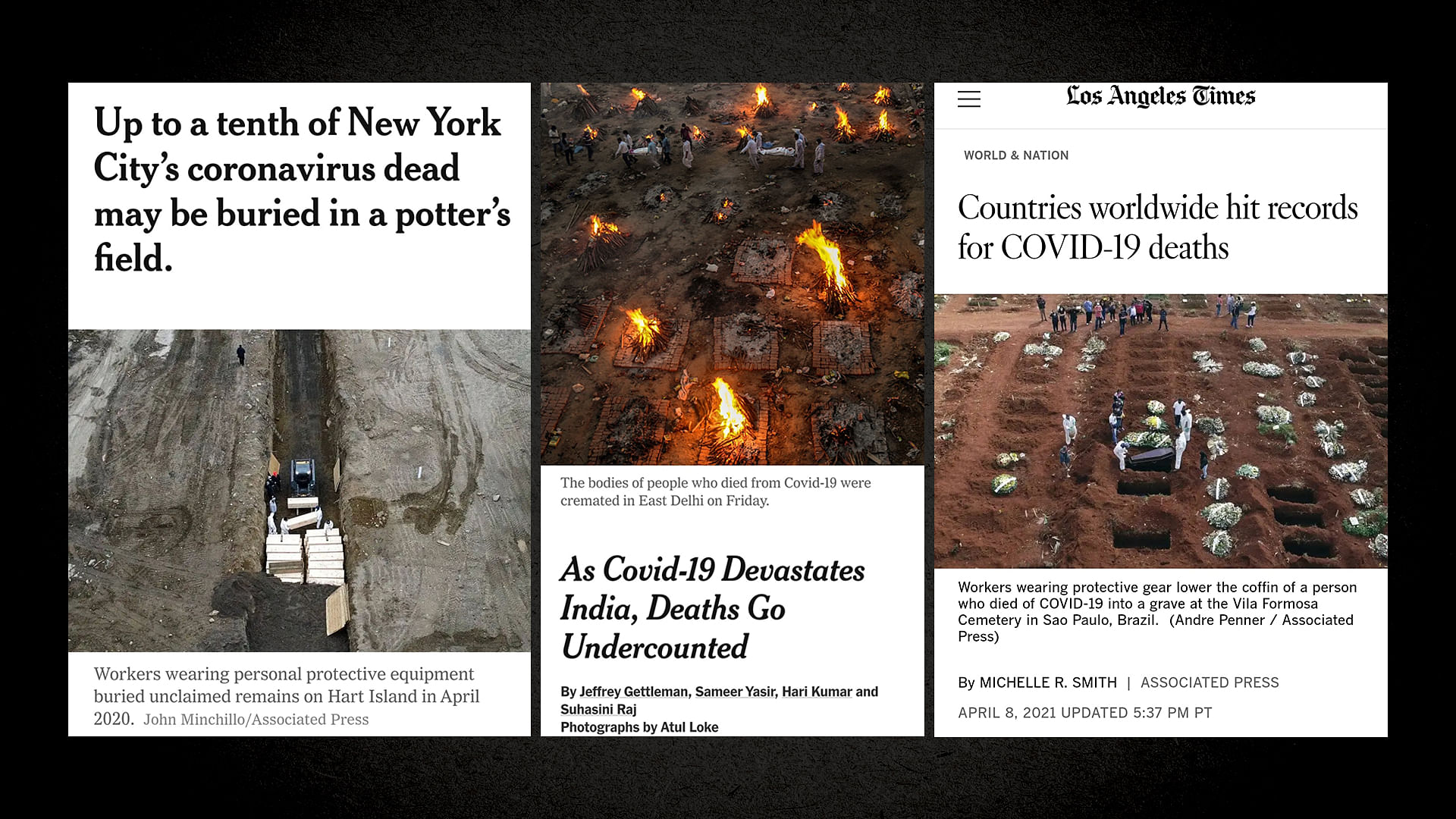