Hathras case: A year on, victim’s brother questioned for five hours in court

Last week, the high court had dismissed his petition on being threatened and intimidated inside the courtroom by other advocates.

ByNidhi Suresh03 Sep, 2021
bookmark_add
The four accused in the Hathras case at the district court on September 2.

It was 5.30 pm by the time Nitish got home, visibly exhausted and clutching a plastic bag of vegetables. His three-year-old daughter came running towards him, gleefully yelling, “Papa, papa.” She clung to his legs while he laughed and tried to walk.

In any other household, this wouldn’t be an unusual moment. But there’s nothing normal about this house located on the edge of a village in Uttar Pradesh’s Hathras.

Nitish had just returned from another long day at the Hathras district court, where the case of his sister’s gangrape and murder is being heard. He had been cross-examined for nearly five hours on September 2.

After the hearing, Nitish climbed on to the CRPF truck and sat on a bench behind the vehicle. On their way home, Nitish and the group of gun wielding men stopped at a vegetable shop. The CRPF men bought oil, atta and rice for themselves while Nitish bought some vegetables. The men then climbed back onto the security truck and headed to Nitish’s house.

When they returned, his daughter turned to the security personnel and said, “See, papa’s back.” They smiled back at her.

Nitish then placed the vegetables on a table, made an entry in the CRPF register, filled out the time of his return, and marked himself present in his own house. After this, he walked through a metal detector, past six CCTV cameras and more CRPF personnel, and finally entered his house.

But Nitish is now used to this routine; it’s been their way of life for the past year.

On September 14 last year, Nitish’s sister Asha, 19, was found half-naked, bleeding and barely alive just metres from her house. She died two weeks later in hospital and her body was forcibly cremated by the Uttar Pradesh police.

Nitish arriving home from the district court in a CRPF truck.

Nitish and his daughter.

In her dying declaration, Asha, who was Dalit, indicated that she had been gangraped. She named four Thakur men as her rapists: Sandeep, 22, Ravi, 30, Ramu, 29, and Luvkush, 21. Three months later, this was corroborated by a chargesheet filed by the CBI on December 19, which accused the four men of gangrape and murder.

Since her death, her family has lived under full-time CRPF protection. “In a protected jail of our own,” as her brother describes it.

A day at court

On September 2, Nitish arrived at the Hathras district court at around 10 am.

In connection to his sister, there are presently two cases being heard: of Asha’s gangrape and murder at the district court, and of her forcible cremation and a botched investigation at the Allahabad High Court.

The family’s lawyer, Seema Kushwaha, was at the court too. A group of villagers stood near the entrance, the relatives of the four accused, hoping to catch a glimpse of their loved ones who have been in custody since last September.

“Look what our life has become,” one of them said. “This is the media’s fault. They turned this into a rape case. Our men are innocent.” She refused to further engage with this reporter.

Journalists are not allowed inside the courtroom and the trial is taking place in-camera. This is in accordance with an Allahabad High Court order passed on March 19 after Nitish filed an affidavit stating that on March 5, he and his lawyer Kushwaha had been severely threatened inside the district courtroom by other advocates.

By 10.30 am, Munna Singh Pundhir, the defence lawyer representing all four accused, entered the court. Forty-five minutes later, a UP police van arrived and the four accused emerged, flanked by the police on all four sides. The hearing began at 11.30 am.

At 1.30 pm, the hearing broke for lunch. Pundhir told Newslaundry the judge had strictly asked advocates not to speak to the media during the break. “Anyway, this whole case has become a media trial,” he said. “These four accused are men from respectable families. They are innocent. This is an honour killing. Your media has made this a rape case.”

The hearing resumed at 2.15 pm and went on till 5 pm. Once it ended, Seema Kushwaha told Newslaundry it had gone “smoothly”. “Nitish was questioned by the defence for five hours,” she said. “The next date for hearing is September 9. I cannot comment on the line of questioning.”

Family members of the accused at the district court.

The district court at Hathras.

Apart from Nitish, Newslaundry learned that two others had been scheduled to stand in court on September 2: Dr Azeem Malik and nurse Nancy. Malik had been the acting chief medical officer at Aligarh Muslim University’s Jawaharlal Nehru Medical College the day Asha was brought to the hospital. Nancy was one of the nurses who attended to Asha during her treatment at the Aligarh hospital.

However, since Nitish’s cross-examination took too long, the judge asked Malik and Nancy to return later. They left the court at 1 pm.

Malik is also the doctor who had contradicted the UP police’s claim last October that Asha had not been raped. Additional director general of police Prashant Kumar had cited a forensic report and said no sperm had been found in her body. Four days later, Malik told the Indian Express that Kumar’s statements “hold no value” since Asha’s samples had been collected 11 days after the incident.

Malik paid the price for speaking out. Two weeks after his statement, the hospital told him “not to perform any further duties” and his service was terminated. He was reinstated soon after.

In January, three of the accused – Ramu, Ravi and Luvkush – applied for bail. Their bail pleas were rejected.

Pundhir applied for bail for Luvkush once again at the district court in August on the grounds that Luvkush was not named in Asha’s dying declaration (even though he’s named in the CBI chargesheet), that Asha was a “well-built” woman, that she was having “an affair” with Sandeep, and that “honour killing cannot be ruled out”.

Pundhir also applied for bail for Ramu but refused to share the grounds. Ramu’s bail hearing is scheduled for September 17.

Meanwhile, four and a half months after Nitish alleged intimidation during a court hearing, the Allahabad High Court took up the matter on August 27. After looking at submitted reports and CCTV footage, the court dismissed Nitish’s petition, stating that it had no found no reason to stay proceedings or transfer the case out of Hathras.

The family’s lawyer Seema Kushwaha told Newslaundry, “How could the court dismiss the petition? We had demanded a copy of that CCTV footage. Why were we not given that copy? First, a Dalit family that dares to ask for justice get intimidated in court, in front of a judge. Then it is a task to demand the CCTV footage. Then the court takes close to five months to hear the matter. And finally, you just dismiss the complaint?” 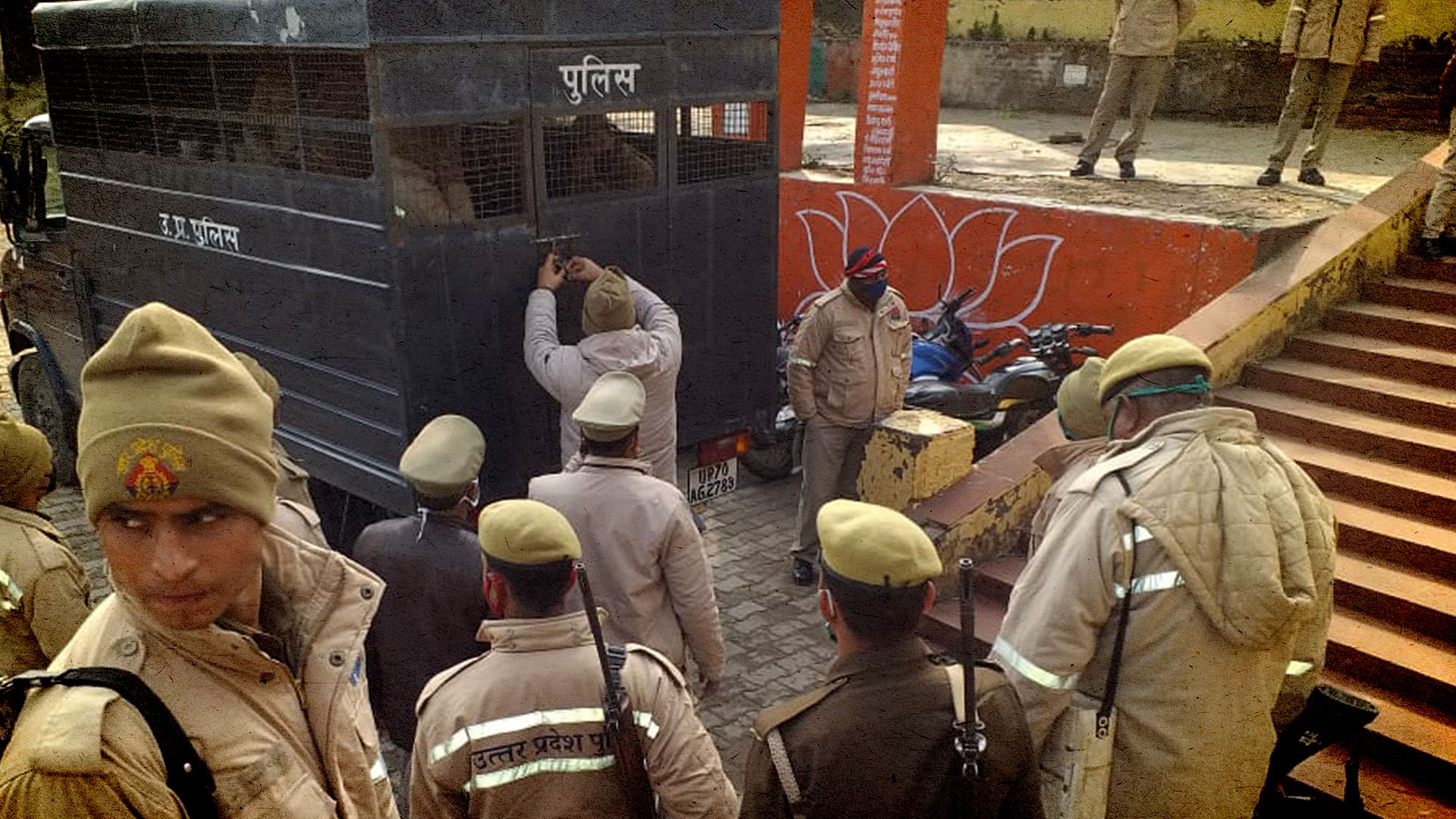 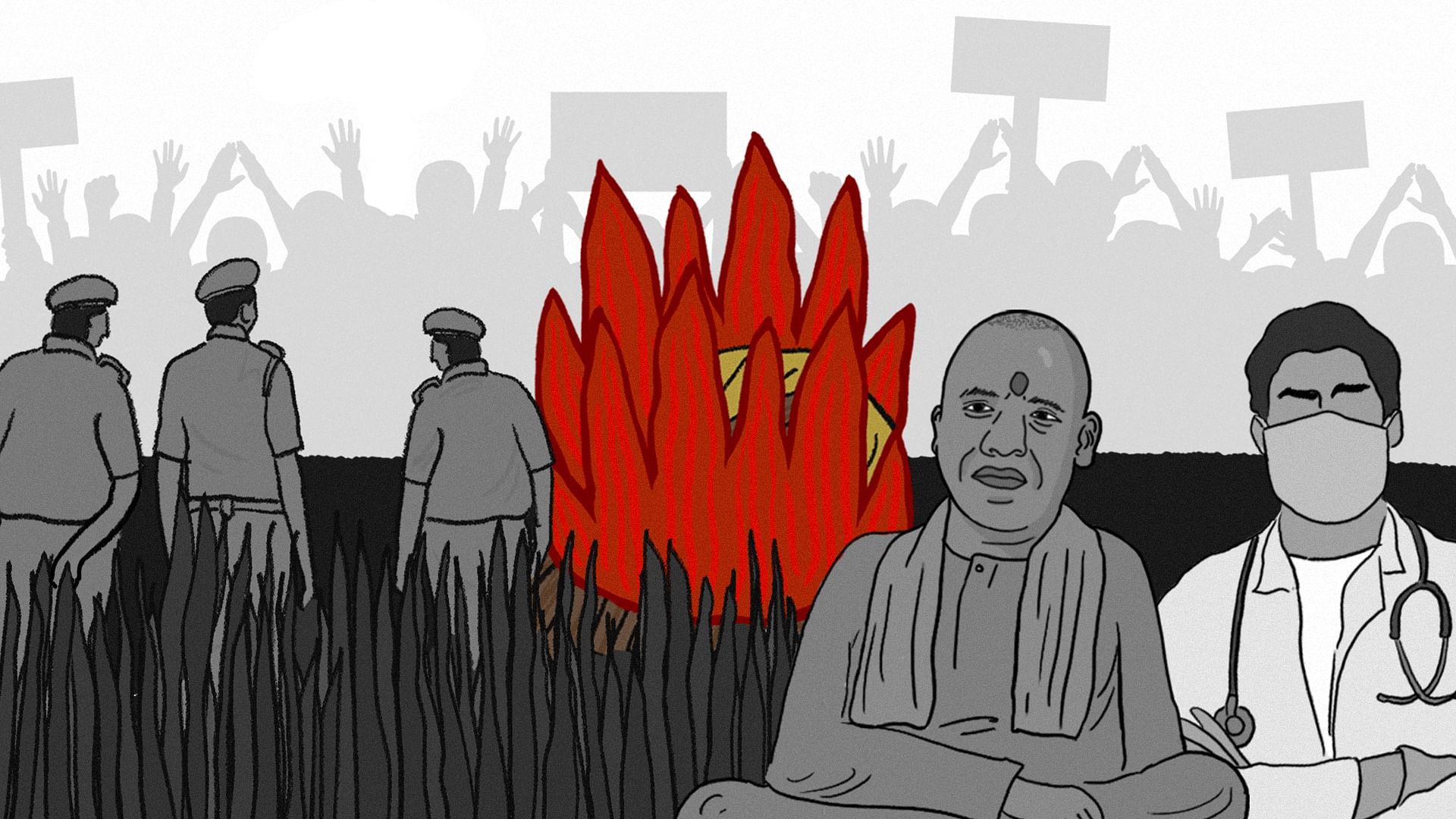 Kushwaha has also made multiple requests for security, even writing to prime minister Narendra Modi and chief minister Adityanath on August 1. “I get a lot of death threats and rape threats,” she said. “Random numbers call and threaten me on my phone and on my husband’s phone. In Hathras, my life is physically in danger.”

Once Nitish returned from court on September 2, he gave his family a quick update before going off to change his clothes.

“On days when there is a court hearing, he never eats,” Asha’s mother told Newslaundry. “He doesn’t have any breakfast, doesn’t carry any lunch, and wants a very simple dinner.”

The family's lawyer, Seema Kushwaha, at the district court.

Asha's family at their home in Hathras.

Asha’s ashes sit in a pot in a cupboard, she said, and the family has vowed to conduct her last rites only after the case is completed. Living under the eye of the CRPF, they’re all exhausted.

“I can’t believe that there used to be a time when I could just simply step out of my house at any time without giving any explanations to anyone,” said Nitish.

Meanwhile, Nitish’s daughter, Asha’s niece, is just happy that her father is home. As she sat on a makeshift swing, her father asked her, “Do you remember Asha didi?”

The child immediately twisted her head to the side, stuck her tongue out, and said, “Asha didi mar gayee, mar gayee.” Asha didi is dead, is dead.

The names of Asha and her family members have been changed to protect their privacy.