Pigs, ponds and platelets: A UP hospital’s tumultuous ride through the dengue outbreak

Grimy, inefficient and chaotic, Firozabad’s Government Medical College is struggling to manage the dengue outbreak that has killed more than 50.

Dr Sangeeta Aneja sits in one corner of the hall of the Government Medical College in Firozabad, which is at the heart of the efforts to control the dengue outbreak in the district. Every minute, a family member meekly walks up to her with the results of a blood test. “Yes, 1 lakh 50 thousand seems good,” she then declares, ticking off the patient’s platelet count with a blue pen. “You should discharge your child.”

On Wednesday evening, 270 patients were admitted at the hospital. Since August 24, over 50 have succumbed to the disease in Firozabad, most of them children.

First described as a “mystery illness”, the upsurge turned out to be a dengue outbreak after 46 of the 49 samples sent to the King George's Medical University in Lucknow tested positive for the dengue virus.

Aneja, the dean of the medical college, has been trying to deploy the meagre resources at her command to rein in the infection. Last week, she had only three paediatricians to treat the sick. Two days ago, another 15 arrived from across Uttar Pradesh and four more are on the way.

Aneja with families of ill children at the hospital.

The Government Medical College in Firozabad.

Two desks have been set up in the hospital hall, with a queue leading to a small room. At the first desk, ill children are examined by a doctor who, based on the diagnosis, directs them to the second desk. Here, a nurse collects a blood sample, which goes to the small room where technicians calculate platelets, a blood cell crucial to fight dengue.

This might sound systematic, but it isn't. The steady stream of patients at the hospital leads to chaos, complaints and confusion. The hospital staff, working long shifts with gruelling hours, often plead with Aneja to go home, to little success.

A senior hospital official put it cynically: “Young doctors do not see any appeal in government jobs anymore. In UP, they are subjected to political and bureaucratic harassment. Doctors in this hospital, as in others, are treated like mules.”

‘Our hospital’s campus is clean’

On Wednesday, Newslaundry reported that the outbreak was caused by dismal sanitation in parts of Firozabad and lack of preventive measures by its municipality. Sudama Nagar, the worst-hit neighbourhood, had multiple plots of rotting waste and open drains clogged with garbage.

The situation at the Government Medical College was no different. The hospital’s entrance had a registration counter for Covid vaccines and, milling among the people, were pigs scrounging for food.

Nearby, just beside a set of chairs for the public, an open drain ran through the campus boundary, accumulating dirt. Monkeys, cows and dogs also made their presence felt.

Newslaundry spotted garbage dumps inside the campus, many with ponds of stagnating water, an ideal setting for breeding mosquitoes.

Asked about the poor sanitation and waste management inside the hospital campus, Aneja said the “campus is clean”. “It has become way better now,” she added. “You should’ve seen it earlier. It is an old hospital. A lot more of the water would collect here when it would rain.”

The campus of the Government Medical College in Firozabad.

‘What are they paid for if I have to do everything?’

In the hospital’s wards, parents told Newslaundry about the poor treatment their children received. Sunil Kumar, 40, brought his two ill children to the hospital on August 25: Anjali, 8, and Avijit,10. “They have been very lax,” Kumar told Newslaundry. “The chief minister visited this hospital on August 30. Since then, they have pulled up their socks.”

Kumar, a daily wager, said his daughter received little medical attention in her first three days at the hospital. “She had 49,000 platelets on the first day. I asked doctors to look into it, but they said don’t worry, she’ll be fine,” he claimed. A normal platelet count ranges from 1,50,000 to 4,50,000 per microlitre of blood.

The next day, Anjali’s platelets fell to 18,000. “She needed blood. My blood group is O+ and my daughter’s is B+,” Kumar said. “I offered to donate mine to the bank, but they said they’ll give me B+ only in exchange for A+.”

Kumar could not arrange the blood. Anjali died of dengue on August 28.

“After Yogiji’s visit, they’re selling blood,” her father said. “If they had done that before, she would’ve been alive.”

In another ward on the second floor, two boys are accommodated in one bed. The scarcity of beds forces the hospital to move around patients on short notice, or discharge them altogether.

Not just medicines, but blood reports are delayed too. Officially, the hospital claims that it takes only three hours to determine the platelet count in a blood sample. Aakash had to wait for over nine hours. Parents told Newslaundry that they also had to fight with the staff to get their children’s reports.

Deepa has three kids. All of them are down with fever. “With this kind of hospital staff, it is hard for me to look after one child,”she said. “How do I look after three?”

In another corner of the ward, Santosh Kumar was tending to his son Kartavya, 16, with cold water. He had to do it himself because the nurses were either too few or too busy to look after every dengue patient.

“I’ve been here for two days,” he said. “The nurses are not doing their work. They ask us to get blood test reports of my son. What are they paid for if I have to do everything?”

Santosh says that parents in the ward, including himself, have to remind the staff about the most basic needs. “Injections, medicines or just water, they won’t do anything themselves,” he complained. “You have to go and poke them for it.”

Hailing from the town’s Baghel Colony, Santosh said he knows at least five children near his home who have died of dengue. “Our colony has very poor sanitation and many ill kids,” he said. “It is hard to believe the government’s casualty figures.”

Sunil Kumar with his son Avijit, 10, at the hospital.

Santosh Kumar looking after his son at the hospital.

Dr Alok Kumar, the chief medical superintendent at the Government Medical Hospital, attributed the hospital’s poor handling of the outbreak to the high number of dengue cases pouring in from around Firozabad.

“Just look at the patient input,” he said, pointing to the packed hall. “Often beds are empty but we cannot spot them. We have to send nurses around to put things in order. We’re also opening new rooms for the new patients.”

Dr Kumar claimed there have only been four deaths in the hospital since the outbreak. “Some parents have brought in kids who had already died,” he said. “They did not die here.”

About the staff shortage, he conceded that the hospital was facing one. “This is a new hospital, it was built in 2019,” he said. “We’ve been recruiting medical professionals but it is still not at par.”

For now, Kumar is relying on a backup plan. “There’s an under-construction building in the campus that doubled up as Covid wards during the second wave,” he claimed. “By tonight, we’ll have 200 more beds setup there. Then our capacity will increase to 500 beds.”

Update: The samples sent to King George's Medical University in Lucknow tested positive for the dengue virus, not the Aedes virus. This has been corrected. 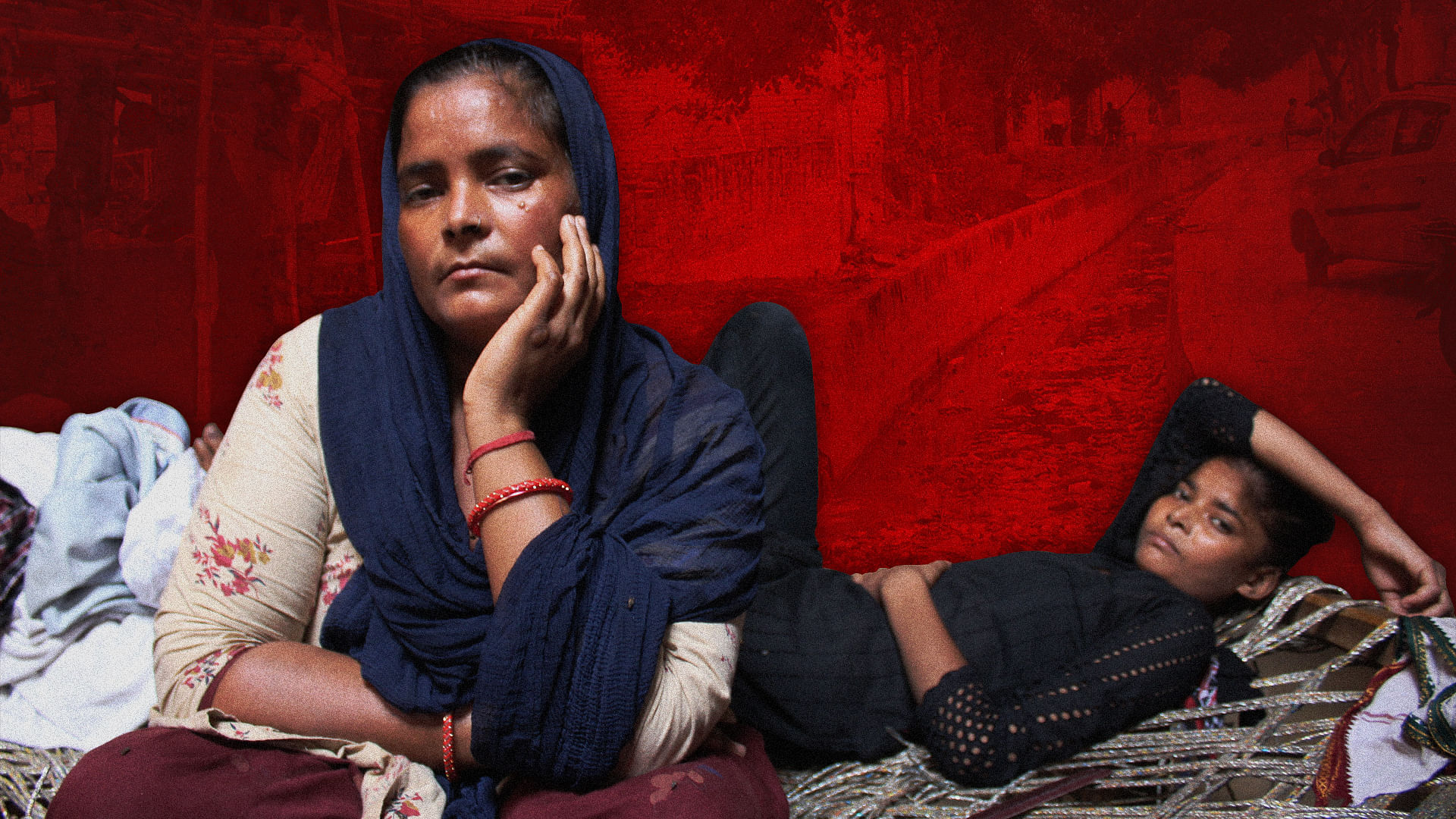 Inside UP’s ‘mystery’ viral outbreak: A killer cocktail of open drains and dumps