Modi’s a hero and Twitter is funded by communists: Key learnings from the Kangana-Navika love fest

Including the sorrows of secularism and why Kangana won’t enter politics.

Giving tough competition to the BJP youth wing spokesperson who claimed India received its freedom on a “99-year lease from the British”, actor Kangana Ranaut has claimed that India getting freedom in 1947 was a “bheekh”, or alms.

Speaking to a smitten Navika Kumar at the Times Now 2021 summit in New Delhi, Kangana said India got its “true independence” only in 2014.

Navika beamed and the audience dutifully applauded – something that happened fairly often during the rest of Kangana’s 34-minute interview.

And yes, we watched it in full so that you don’t have to.

It was also a chance for the actor to espouse her views on nationalism, the Congress party, feminism, the “tukde-tukde” gang, her recent Padma Shri award, and more.

On her part, Navika’s job was clearly less interviewer and more enabler. “This is why everyone calls you saffron,” she said in response to Kangana’s “bheekh” comment, even as multiple people slammed Kangana’s comments on Twitter.

And while Times Now described the interview as Navika asking “some pointed questions”, it’s hard to figure out what they’re talking about. Kangana steered most of the conversation while, at one point, Navika even requested her guest “not to strangle” her for asking questions on Bollywood feuds.

When Kangana said she'd probably “get ten more cases filed against her after this” (the freedom comments), Navika told her not to worry. After all, she said, Kangana was in Delhi, and “they” were in Mumbai.

The interaction was also a great example of women lifting up women. Both interviewer and interviewee spent plenty of time gushing about each other. Kangana told Navika, “Your presence is so profound in our lives. I feel that we’ve been friends forever.” Navika blushed and reciprocated the love by telling Kangana she’s made a “powerful impact”.

But the two didn’t only praise each other, but also the “hero” prime minister.

“For my family, the prime minister and home minister are the biggest superstars,” Kangana said. “Of course, I feel the same. Honourable PM is the most popular leader in the world, there’s no doubt about it. We are so fortunate we have got him. He is going to take India to a place where we can be proud.”

On her ban from Twitter, Kangana said, “Twitter is a private company, a profit-making venture. If they can ban the president of the United States after taking money from communists, they can ban me for the money.”

Kangana’s take on politics is that she has “great respect” for Veer Savarkar and that history is “distorted” against him, thanks to the Congress stating he wasn’t a freedom fighter. The Congress got quite a bit of airtime: the party was described as an “extension of the British”.

She also blamed the Congress for India being unnecessarily secular.

“Hindustan is secular. And what is secular? Is it no man’s land. Not mine, not yours, it’s everybody’s,” she said to thunderous applause. “We had 10-15 percent Muslims but we were still secular and no man’s land. This happened because British Congress played on the sickular-vickular divide. This is Congress in a nutshell.”

On her Padma Shri award, she claimed it had come “from the people of India”.

“I have spoken about gender bias, pay parity, very prominent tukde gang and anti-nationals,” she pointed out. “People tell me the government has rewarded you, not India. These dimwits don’t know the government represents the country, doing things on behalf of the country.”

Here’s Navika’s take on Kangana getting the Padma Shri: “Kangana is an achiever. Narrowly defined as woman doesn’t apply. Gender is not important. This is not just a woman’s award.”

This was clearly a bee in Navika’s bonnet; she later said, “India needs a lot of spunky women like you. I will call you a person, because calling a woman a woman is limiting.”

At one point, in the context of Kangana’s statements on politics, Navika said, “No audience in this summit has any doubts which direction you’re going.”

Kangana said Navika and the audience were misinformed.

“I am only a shudh deshbhakt,” she said. “In my line of work, one can earn money, wear good clothes, have affairs, sabkuch kar sakte hain...Don’t want to work in a field where I am judged, can’t wear nice clothes, or have affairs.”

She also detailed her learnings from playing politician J Jayalalithaa in the movie Thalaivii. “Thalaivii taught me that it’s difficult to be a woman in politics and it’s not a kind world for women,” she said.

When the audience did not respond, Navika chastised them. “Why are you all so silent,” she said, “give a round of applause.”

Also, it would only be fair of us to mention that Navika did manage to ask one “pointed” question. She said she wanted to do “investigative journalism” to find out who is the future “Mr Ranaut”.

Sadly, she never really did get an answer to that question, but props for trying.

Update: The comment on '99-year lease from British' was made by a BJP youth wing spokesperson, not a BJP spokesperson. This has been corrected. 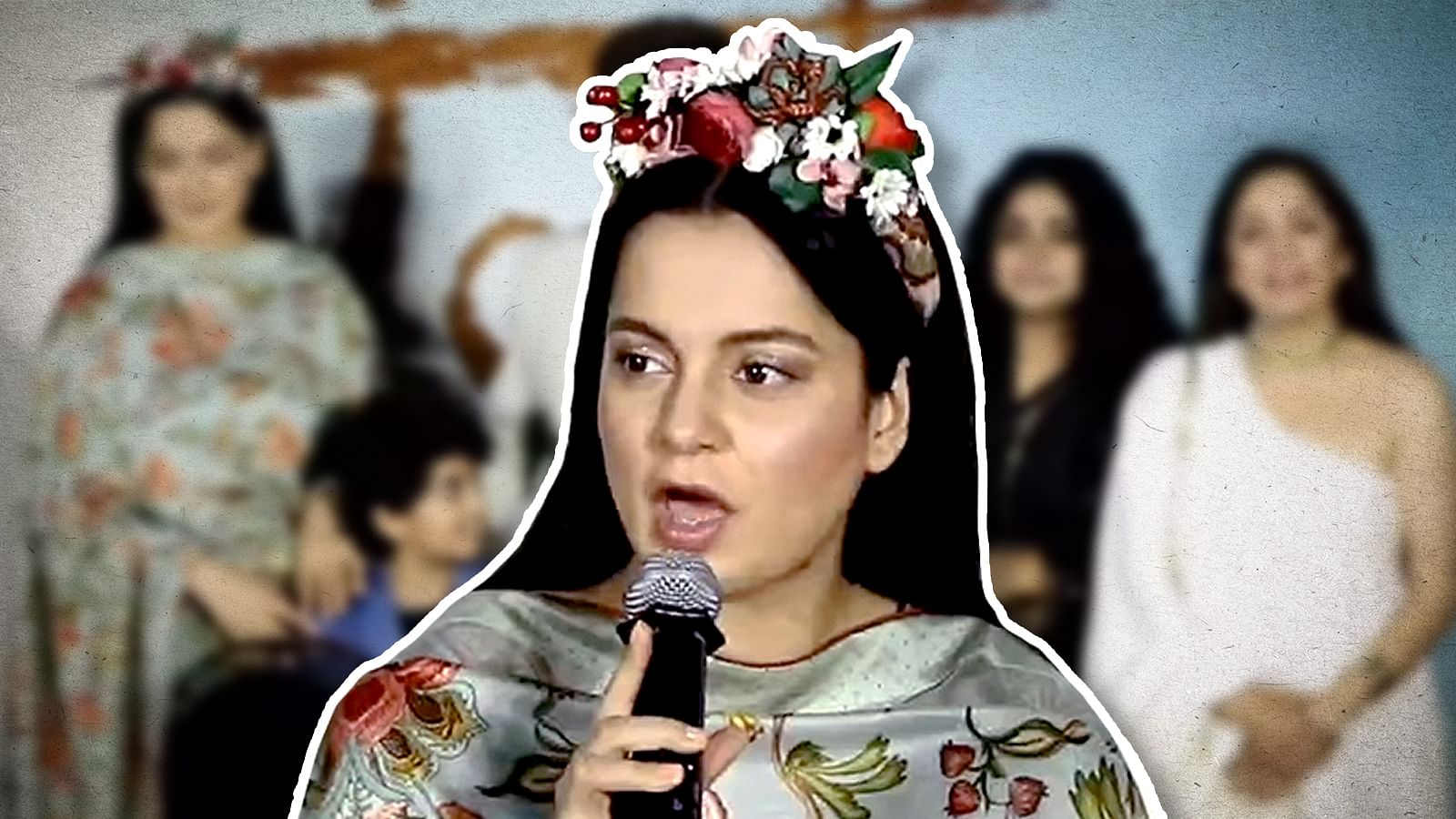 Kangana Ranaut is officially the Mad Queen of Bollywood