‘We just want to pray with dignity’: With cops passing the buck, Gurugram’s namaz is at an impasse

Right-wing groups are camping out at namaz locations, while Muslim groups are hoping the police will take action against the sloganeering of November 5.

ByTanishka Sodhi13 Nov, 2021
Cow dung left behind from the Govardhan puja at the namaz location in Sector 12.

These are some of the slogans raised on November 5 at Gurugram’s Sector 12A, where a Hindu right-wing group organised a Govardhan puja to protest against namaz being offered at a ground in the area.

The puja – or protest – was attended by the likes of Amit Hindu, who is associated with the Bajrang Dal and Rashtriya Swayamsevak Sangh; Dinesh Bharti from the Bharat Mata Vahini; and BJP leader Kapil Mishra, who is well-known for his incendiary speech shortly before the Delhi riots last year.

Over the last two months, Hindu right-wing groups and locals have fanned communal tension in Gurugram, objecting to Muslims conducting their Friday prayers in the open. This tension has a long history, and this month’s protests are yet another chapter.

Following the sloganeering on November 5, Muslim groups raised the issue with Yash Garg, deputy commissioner of Gurugram, on Monday, November 8. According to the Gurgaon Muslim Council, one of the representative bodies of Muslims in Gurugram, they asked Garg to take cognizance of the “provocative speeches and slogans made against Muslims” and to take “immediate action”.

It wasn’t an official police complaint, Newslaundry was told, but a plea to handle the issue.

On Friday, November 12, namaz did not take place at the Sector 12A ground at all, as over a dozen people, who called themselves “locals”, gathered to protest any attempt to hold prayers. In Sector 18, more than 80 people – some locals and some part of a group called the Manavta Sangathan – stood similarly in protest. Muslims who came to offer namaz at this spot in Sector 18 had to leave and offer prayers at another location.

In 2018, there were 150 namaz spots in Gurugram. But after multiple disruptions by Hindutva group Sanyukt Hindu Sangharsh Samiti – the same group that organised the Govardhan puja last week – the local administration earmarked 37 places as designated namaz spots.

But prayers were offered at only 20 of the 37 spots this Friday. On November 2, the district administration had withdrawn permission for namaz at eight designated locations after “objections from local residents and resident welfare associations.”

“The more you hate Muslims, the more Hindu you are...this is what is now considered as being a Hindu,” said Mohammad Adeeb, a former Rajya Sabha MP who was part of the delegation that met with deputy commissioner Garg on Monday.

During their meeting with Garg, Adeeb said, the delegation “gave it in writing” that it was the police’s responsibility to file an FIR against those who made speeches on November 5. If the police do not take suo motu action in the next couple of days, he added, he would lodge an FIR.

A residential area in Sector 12.

What remains of the Govardhan puja.

The delegation’s anger also stems from the double standard enforced by authorities.

On November 5, Muslims did not come to offer namaz at Sector 12A as they had heard about the Govardhan puja being organised at the same spot that day. According to them, they had been advised by the police to refrain.

“So, we withdrew as we did not want to cause inconvenience,” Adeeb said. “But the same ground that they refused to us, saying it is a public place, is where they let pujas take place.”

Half of this section of land in Sector 12 is owned by the Haryana Urban Development Authority, while the remaining is private property. According to the police, the Muslim community began conducting Friday prayers here around a month ago, after their original spot, also in Sector 12, was disrupted by protests.

Newslaundry contacted deputy commissioner Garg to ask about the status of the delegation’s complaint.

Garg confirmed that the delegation had submitted a memorandum on Monday.

“The situation is peaceful right now and will continue to be,” he said. “Namaz has been offered for years in Gurgaon.” He added that security would be deployed only if the situation called for it.

Deswal told us to speak to assistant commissioner of police Preet Pal.

Pal said he had no clue about the situation and directed us to speak to deputy commissioner of police (west) Sumer Singh.

Sumer Singh did not take our phone calls.

Meanwhile, Satender Singh, the station house officer of Sector 14 police station, which has jurisdiction over Sector 12, said he had not received any complaint yet about the speeches on November 5.

“Once we receive a complaint, we will look into it,” said Singh.

Namaz might not have taken place at Sector 12 this Friday, but reminders of November 5’s Govardhan puja lie scattered across the ground, in the form of multiple mounds of cow dung.

Around 10 people sit in a corner, eating groundnuts. They told Newslaundry they’re ready to protest if any Muslim arrives to offer namaz. In fact, some of them said they’re ready to be hit by lathis and go to jail for this “cause.”

“They read namaz here twice, after which we started opposing,” said Praveen Hindustani. “Arrests also happened but then the authorities realised they were wrong, and told them [Muslims] not to pray at places where people oppose.”

Hindustani himself was among 26 people detained on October 29 for disrupting namaz at this location. According to the police, he was detained as a preventive measure and was granted bail that evening.

Speaking to Newslaundry, Hindustani also warned of the purported dangers of jumma namaz, or Friday prayers.

“Maximum incidents in the world take place after jumma namaz,” he said.

Where precisely, we asked.

“This happens all over the world,” he said. “After they get together at jumma namaz, they do anything. So now, we won’t give them the opportunity. We don’t trust them.”

But what is the problem with a few minutes of prayer once a week?

“If 400-500 people come to any open spot, you can understand what their intentions might be,” Hindustani said. “We won’t let them pray here. It’s as simple as that.” He supplemented this bigotry by citing “traffic congestion” and “potential violence”.

“There’s a school right behind this ground, our kids won’t be able to attend it,” he continued. “Our kids are getting demotivated. We also pray, but why do they have to do it in an open space? Who is making them?”

Raju Bhardwaj, who was sitting nearby, chipped in: “Namaz ke naam peh jihad ho raha hai yahan.” In the name of namaz, jihad is happening here.

The group of men also said that they plan to convert the ground into a spot to play volleyball – a game they’ve “always” wanted to play here. Plans were discussed on how to go about it: how they would play, how many teams they would form, and so on.

Shops near the namaz location in Sector 12 have been closed since the beginning of this month.

The ripple effect of these protests is felt by those who run shops nearby, some of them for over 30 years, on the private side of the land. Many of the shops closed once the protests intensified on October 29.

“People were putting up lights for Diwali while we started shutting down ours,” said a shopkeeper on the condition of anonymity. “In all this, we are the ones stuck. See, the cow dung is still there from the Govardhan day. If they would have just removed it that day, we could have carried on with our work. Now, they are saying they’ll do something else.”

“The fight has changed,” he added. “It has escalated.” According to the shopkeeper, his landlord was pressured into closing the store after receiving numerous phone calls from “different groups”.

On the possibility of filing an FIR or police complaint, he said: “If we take any action before jumma namaz, they will give a reaction. We wanted this Friday to go smoothly. Our top priority is just to be able to pray with dignity. It is not to confront. But if you do hate speeches against the community and we just silently sit back, this will become a new norm.” 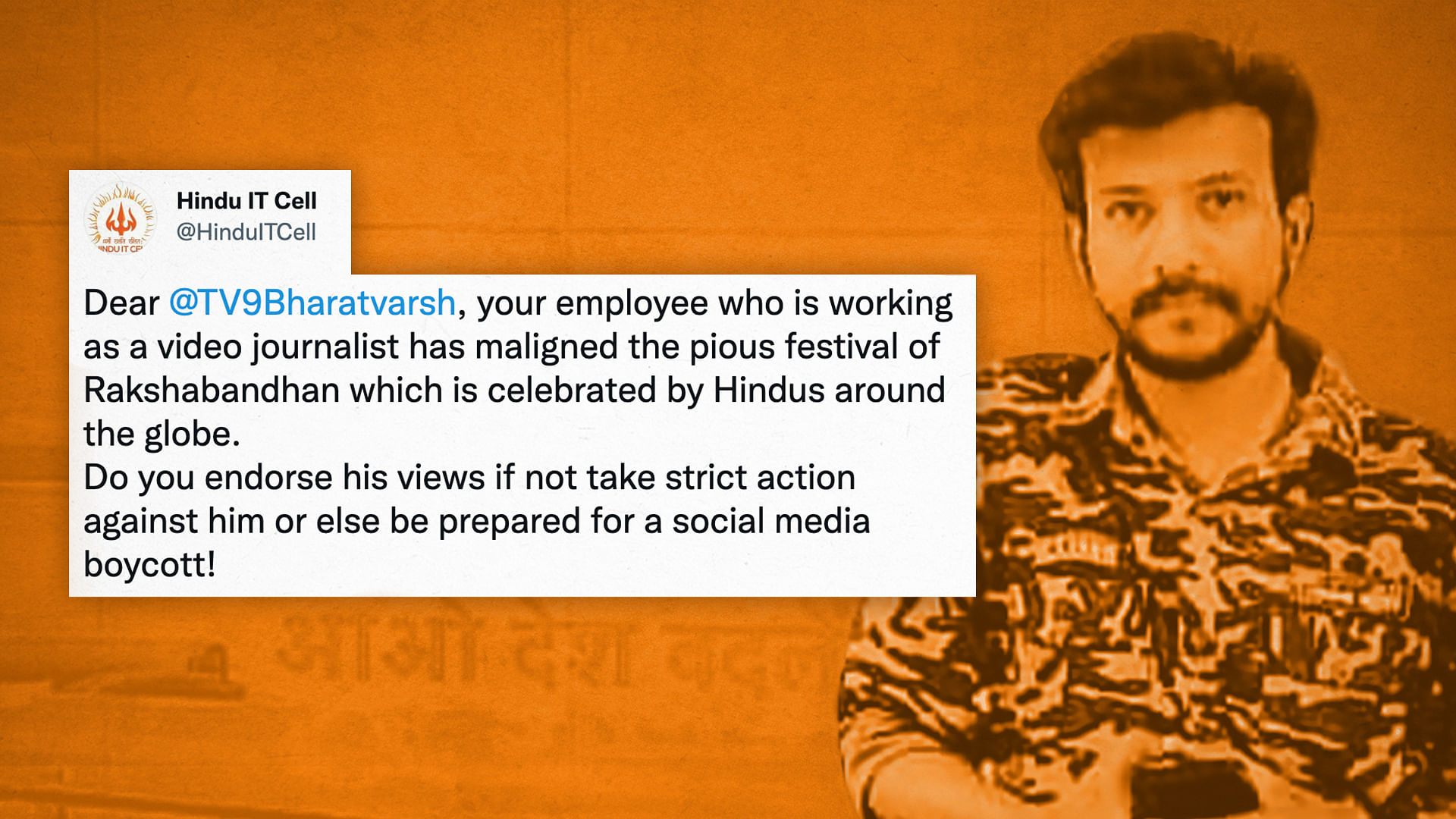