Days before the Modi government decided to repeal the farm laws, the community explained life at the protest and why they stood by Lakhbir Singh’s murder.

Paramjeet Kaur was a vision of electric blue. With a blue turban wrapped around her head and wearing her characteristic blue dress, she sat cross-legged on a charpoy inside a bamboo hut at Singhu border. Her status was clear from the way the group of Nihang men nearby doted on her.

The Modi government would repeal the farm laws three days later but when Newslaundry met the Nihangs that day, the farmer protests were in full swing.

Paramjeet had just returned from the district jail at Sonipat where Narain Singh, her husband and a Nihang leader, is currently lodged.

Narain and three others were arrested last month in connection with the murder of Lakhbir Singh, a Dalit man, at Singhu. On October 15, Lakhbir’s body had been found tied to a barricade close to where the Nihangs stayed. His left hand had been severed and his right foot slashed.

Photos and videos soon circulated on social media, not just of Lakhbir’s body but of his murder. The videos captured Nihang men, including Narain Singh, sloganeering and lynching Lakhbir as punishment for allegedly “desecrating” a holy book. The four men later surrendered to the Haryana police.

Paramjeet’s phone’s wallpaper is a photo of her and Narain. Ever since he was arrested, she’s been camped out at Singhu with her son, leaving behind two daughters in Punjab. In her husband’s absence, she’s in charge of his group. Her responsibilities include making sure the animals at the site, and the Nihangs too, are fed, ensuring their supplies are well-stocked, and settling matters if arguments break out.

Paramjeet is proud of her husband, she said.

“Yes, I miss him,” she told Newslaundry. “But he did the right thing.”

On the morning of November 19, when prime minister Narendra Modi announced that the farm laws would be repealed, Newslaundry telephoned Sher Singh, one of the Nihangs interviewed for this story.

“Have you heard the news,” we asked.

Sher was clueless. When this reporter explained Modi’s announcement, he couldn’t believe it. “Are you sure? Is it confirmed? Can you send me a link?”

But he was apprehensive about the credibility of the announcement. “What if it's a trick to get us to vacate from here?” he asked.

The brotherhood of the Nihangs

On the face of it, the Nihangs at Singhu are predominantly men. Though they claim there are many women among them, Paramjeet Kaur is one of the few who stood out.

The Nihangs are “nomads”, in their own words, and there is no accurate count of how many of them are at Singhu, though several of them told Newslaundry they number about 300 at the protest site. Last November, when thousands of farmers broke through barriers and headed to Singhu for the start of their one-year fight, the Nihangs were among them, majestically riding their horses at the forefront of the protest. They settled at the front of the protest site, with the Delhi police on one side and kilometres of trucks and huts on the other.

“We never stay in one place,” said Sher, 32. “This is the longest we’ve lived anywhere.”

The Nihangs are largely divided into two dals or sections: the Buddha dal and the Taruna dal. Additionally, they also comprise various chhaonis or groups, at least eight of them.

When Newslaundry visited Singhu on November 16, the Nihangs were camped out in a tumbledown building, whose courtyard was used as a makeshift stable while the big hall was strewn with mattresses, food grains, blankets, and piles of spears, shields and swords.

Lounging on a couch in the centre of the hall was Sher, who explained that he had been at Singhu for a full year now.

“We were the shield of the Sikh movement and now the farmers’ movement as well,” he said. “That’s why we are sitting right at the forefront. We make sure that no one will spoil the protest.”

However, regarding the farm laws, he made it clear the Nihangs were uninvolved with politics or policy. “Our job is to protect people,” he said. “We’re not concerned about what laws are passed or not. As long as people of the Sikh community will sit here, we will be here.”

Sher added that very few Nihangs even participate in electoral politics. “I have never voted in my life,” he proclaimed. “I don’t have a problem with any party. I’m just not interested in them. They’re all sell-outs.”

Sher decided to “become” a Nihang Singh when he was around 20. When asked about his parents, education and life before becoming a Sikh warrior, he smiled and refused to engage, but cheekily said, “I can tell you one thing though: I had an eyebrow piercing.”

However, he added, he soon left behind that life of material pleasure to follow a path of devotion and duty. Today, within his group, called the Sahibzada Jujhar Singh, Sher is the leader, the baba, largely responsible for maintaining the upkeep of the horses.

Nihangs are permitted to marry and procreate but many of them remain celibate to focus on their faith, Sher said, as he chose to do as well. Paramjeet, however, told Newslaundry she became a Nihang when she was 13 and her marriage to Narain was arranged by community members.

Which, quite naturally, brought the conversation to Lakhbir Singh.

Sher smiled when Newslaundry brought up the murder.

“If someone touches the Gita, won’t Hindus get angry?” he said. “If you destroy the Quran, won’t Muslims get agitated? It’s the same. Lakhbir tried to tear up the Guru Granth Sahib and he was punished for it.”

He added, “What we did to him is nothing. We didn’t do much because this is a very public place.”

The conversation was interrupted by the arrival of another Nihang, who held two pigeons in his hand. “The poor birds seem to have fallen from the roof,” Sher explained. “He’s helping them to be free again. We live off mother nature. For us, making sure that our animals – our horses, our goats, our birds – are safe and healthy is very important. We can’t stand to see them hurt.”

A few metres away from Sher was Gyani Shamsher Singh, 53. Men and boys, some as young as 11 years old, clustered at his feet as Gyani, or babaji, wrapped his blue turban, recited a prayer, and then settled to talk. He told Newslaundry the Nihang community has its own ideas of governance and justice.

“We are a brotherhood and we have our forms of karma and dharma,” he said. “We live and govern ourselves by those rules. And these rules are not always the rules of the state.”

The Nihangs have a unique interaction with other farmers at Singhu too. “We cook our own food, we don’t eat theirs unless it’s a special occasion and they invite us,” Paramjeet said. “They also don’t come and eat our food.”

Cracks in the protest

A year after the protests began, cracks of division and dissatisfaction were evident.

For the first three months, the Singhu protest was one large gathering of farmers – led by the Samyukth Kisan Morcha, an umbrella organisation of 32 farmer leaders – with the Nihangs at the forefront. By November, this split into a large group led by the SKM, and a smaller one led by leaders of the Kisan Mazdoor Sangharsh Committee.

The KMSC has historically been its own entity. Fifteen years ago, it broke away from a larger farmer group, the Kisan Sangharsh Committee, and was mostly active in Manjha area in Punjab. Today, it has a presence in nearly eight districts of the state.

When the farmers first arrived in Singhu, the groups, including the KMSC, agreed to form a united front under the SKM. This changed on January 26, when the SKM decided to hold a tractor rally on Republic Day along the periphery of New Delhi. The KMSC pushed back, saying the farmers should enter Delhi, and so, they did so, riding their tractors to Red Fort.

The violence that followed at Red Fort left one farmer dead, 40 security personnel injured, and nearly 200 farmers detained after 22 police complaints were registered. Since then, the SKM has distanced itself from the KMSC and said that members of the SKM did not take part in the violence.

During Newslaundry’s visit on November 19, the KMSC sat at the very beginning of the protest site in Singhu, with a small stage and about 200 tents. A barricade of tin stood behind the stage, separating them from the rest of the protest.

“We don’t go to their side and they don’t come to our side,” said Sukhwinder Singh, the senior vice president of the KMSC at Singhu.

But what does this have to do with the Nihangs?

Every member of the Nihang community that Newslaundry spoke to said that they no longer have any respect for the SKM leadership, calling them “sell-outs”. This is because when Lakhbir Singh was killed, the SKM made it clear that they were against the violence and would cooperate with the police. In a press statement, the Morcha leaders said, “The Morcha is against sacrilege of any religious text or symbol, but that does not give anyone the right to take the law into their own hands.”

Sher Singh said that Nihangs have faith in the KMSC leadership who, he said, had made it clear to the Nihangs that they would stand by them if needed.

Paramjeet Kaur also said that when her husband was jailed, no SKM leaders visited her but leaders from the KMSC came and showed her their support. “They assured us that we had not done anything wrong,” she said.

However, KMSC vice-president Sukhwinder told Newslaundry, “The Nihangs are our holy warriors and we fully support them but we definitely do not stand by what they did to Lakhbir Singh. That was wrong.”

As for the SKM, Omkar Singh, who is general secretary of the Bharatiya Kisan Union (Rajewal), a member of the Morcha, told Newslaundry that the violence at Red Fort was a result of “government inefficiency”.

On Lakhbir’s murder, he said, “We do not tolerate what Nihang Sikhs did to Lakhbir Singh. Rajewalji” – referring to BKU(R) president Balbir Singh Rajewal – “condemned the incident at the same time.”

Stating that the Morcha had “no sympathy with such elements”, Omkar said, “We had clearly told the Nihang Sikhs, ‘If you can live peacefully, then stay. If you do such things, we will not tolerate it.’”

“We are not moving till the farmers leave.” 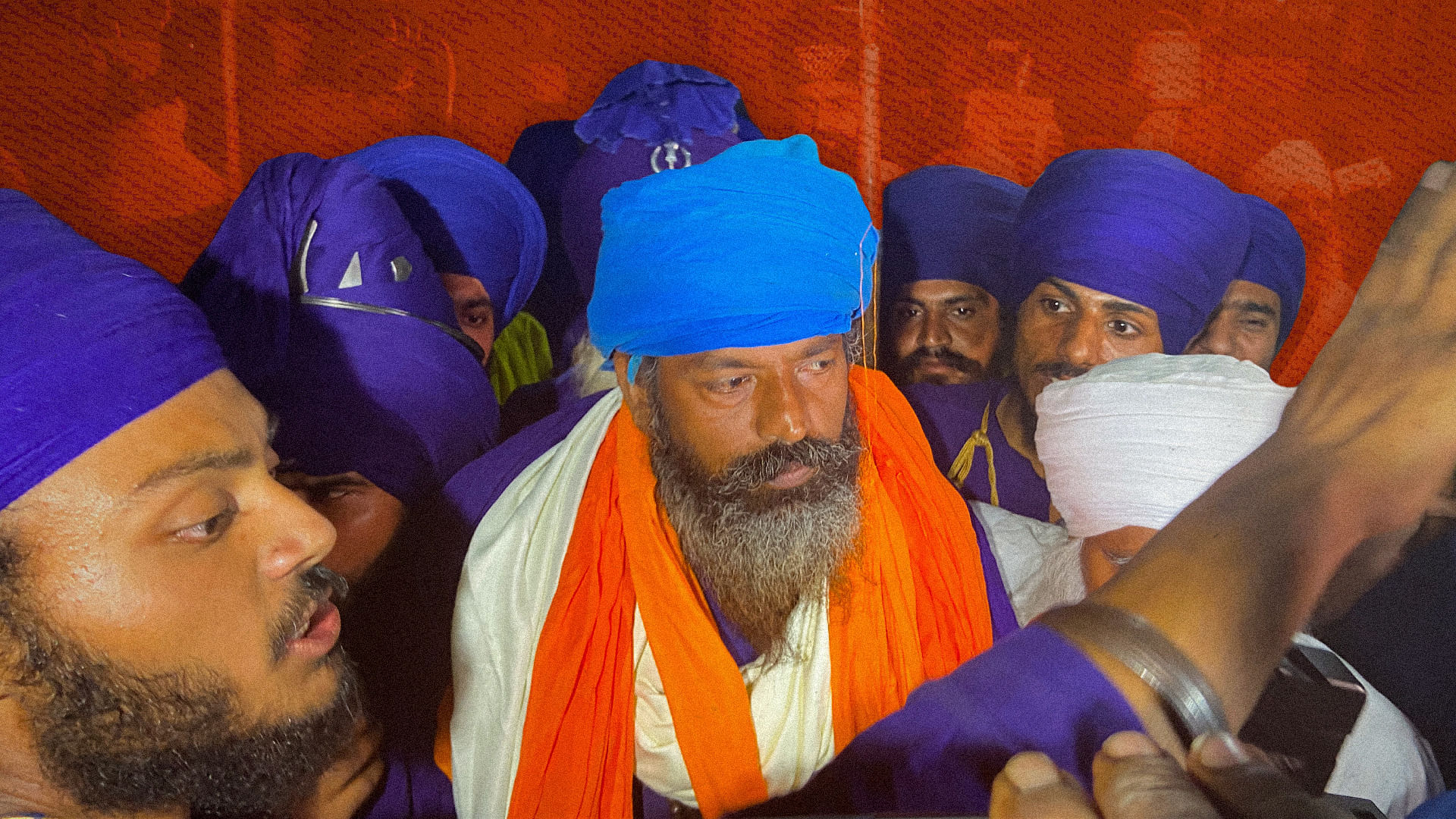