What do Bhima Koregaon and Hathras have in common? Siddique Kappan, according to UP police

UP police is convinced press releases on Siddique Kappan’s phone are proof of him ‘receiving instructions’ on behalf of PFI.

This is the sixth part of Newslaundry’s ongoing series on the case against journalist Siddique Kappan. You can read the previous parts here.

Based on an examination of the chargesheet by defence lawyer Madhuvan Dutt Chaturvedi, Newslaundry has learnt that a series of WhatsApp messages, recovered from Kappan’s phone, have been interpreted by UP police’s special task force as evidence of the organisation Popular Front of India “trying to interfere” in the case of violence at Bhima Koregaon in 2018.

This alleged connection to the Bhima Koregaon case, which controversially led to activists being arrested under the UAPA, comes on top of claims that Kappan was working for the banned organisation Students’ Islamic Movement of India; is a member of PFI; and was going to Hathras to instigate anti-government sentiment on behalf of PFI. As Newslaundry has reported previously, there is little evidence to back these claims in the 5,000-page chargesheet.

Kappan has maintained that he was going to Hathras as a journalist and has repeatedly denied any connections to either PFI or SIMI.

On December 31, 2017, the annual celebration to commemorate the 200th anniversary of the Battle of Bhima Koregaon was held at Bhima Koregaon in Maharashtra. An event, also known as the Elgar Parishad convention, was organised by retired justices B G Kolse Patil and PB Sawant.

A day later, violence broke out between groups of Mahars and Marathas, resulting in one death and several injuries. Protests erupted across Maharashtra in which 30 policemen were injured and over 300 people were detained.

Initially, Hindutva leaders Milind Ekbote and Sambhaji Bhide were accused of instigating violence, but a few months later, the police claimed activists and human rights lawyers who had attended Elgar Parishad were responsible for the unrest that followed. Newslaundry has previously reported on how the judicial process has been repeatedly violated over the past three years.

On August 28, 2018, the Pune police conducted raids at the homes of 10 activists across India in connection with the Bhima Koregaon case. Trade unionist and human rights advocate Sudha Bhardwaj, columnist and activist Vernon Gonsalves, cartoonist and activist Arun Ferreira, poet and activist Varavara Rao, and journalist and activist Gautam Navlakha were arrested and booked under the UAPA.

In January 2020, the National Investigation Agency took over the investigation of the Bhima Koregaon case from the Maharashtra government. So far, three chargesheets have been filed by the NIA. None of them mention PFI.

Between 6.33 am to 9.52a m on August 28, 2018, Kappan received a series of messages from P Koya about arrests being made in connection with the Bhima Koregaon case. At the time, Koya was the editor of the Malayalam newspaper, Thejas Daily, where Kappan worked as a sub-editor.

According to the UP STF, Thejas Daily was a PFI mouthpiece though former employees of Thejas, like Koya, deny any such affiliation. Koya had worked with Thejas Daily as an editor since its inception in January 2006 until December 2018 when the newspaper shut operations due to a lack of funds.

“It [Thejas Daily] was run by a private enterprise and functioned as a general newspaper,” Koya told Newslaundry. He also confirmed that Kappan had worked for Thejas Daily, having joined as a sub-editor in 2015.

The UP STF has also alleged Koya has been associated with the PFI since 2006.

Whether or not Thejas Daily was a PFI mouthpiece and Koya is a PFI member, the messages included in the chargesheet fail to establish Kappan’s connection to either PFI or the unrest in Maharashtra in 2018.

In the chargesheet, the investigating officer is quoted as saying messages, like the one in which Koya shared a press release from the National Confederation of Human Rights Organisation, are evidence of “PFI trying to interfere” in an incident which is actually “action taken against extreme Dalit outfits and Naxalites” in Maharashtra.

Being sent press releases is an everyday part of most journalists’ working day, but the UP STF interpreted Kappan being sent the press release as evidence that he was “a medium entrusted with carrying out PFI agenda and receiving instructions on their behalf.”

Altogether, 81 pages of WhatsApp messages between Kappan and Koya along with their transcripts have been included in the chargesheet.

As was previously reported by Newslaundry, WhatsApp chats may be considered electronic evidence in court but their reliability will depend on the context. In this case, the context seems clear – following some breaking news, an editor sent messages with updates to their sub-editor. However, according to the UP STF, Koya’s messages to Kappan should be read with suspicion.

Among the messages Koya sent Kappan on August 28, 2018, is a long note that appears to have been intended for circulation. It reads:

“Modi government showing its might by raiding top human rights activists across the country. You will not be able to silence any of us. You will not be able to crush us. However hard you try. From 6am onwards the Maharashtra police raided and searched Father Stan Swamy’s place in Ranchi. Through the search operations they confiscated several items like computers, laptop, CDs, papers and books. He was also quizzed about some organisations in Maharashtra. Just received a message that the Pune cops are simultaneously raiding Arun Ferreira and Susan Abraham, Vernon Gonsalvez’s residences in Mumbai, Gautam Navlakha’s house in Delhi, Anand Teltumbde’s house in Goa. At Hyderabad, Varavara Rao and Kranti’s house, Vara Vara Rao’s daughter Anala and journalist Kurmanath’s house also raided. All under the Bhima Koregaon charade. Please pass this on as far as we can some press informed but please let more media.”

Following this, Koya sent approximately 10 messages with updates about the arrests and raids. In one message, he asked for Kappan’s email. In another message, sent at 8.40 am, Koya wrote:

The last message in this series was a press release by the NCHRO, condemning the raids and demanding the immediate release of the activists.

“Some URLs related to news about Gautam Navlakha and Bhima Koregaon have been shared. In response Siddique Kappan has texted at 3:42 PM ‘already done’,” reads the chargesheet while quoting the investigating officer.

One of the two URLs mentioned in the message from Koya linked to a story published on the Times Now website, about the Supreme Court’s decision to set aside a Bombay High Court verdict that granted the police more time to file a chargesheet in the Bhima Koregaon case. The second URL sent was a story published by the Quint on the Bombay High Court granting Gautam Navlakha interim protection from arrest.

Kappan’s reply indicates these messages may have been related to journalistic work.

Similarly, other messages included in the chargesheet suggest a journalistic relationship between Kappan and Koya. For instance, a text message sent on October 26, 2018, at 11.25 pm, asks Kappan to “send the story”.

Speaking to Newslaundry, Koya, who is now retired, said he didn’t remember details of the messages he had exchanged with Kappan in 2018, but they were the kind of routine conversations one would expect between an editor and a sub editor.

“Kappan was in Delhi and I used to chat with him about the [Bhima Koregaon] case and collect more information,” he said. “I am also general secretary of NCHRO, an organization working in the field of human rights. The police can copy-paste anything to ‘thicken’ the charge sheet literally.”

Koya said the UP STF had approached him for a statement.

In addition to indicating a connection to the Bhima Koregaon case, the UP STF’s contention is that the messages sent to Kappan by Koya are further proof of Kappan being in direct contact with PFI members.

Here is a transcript of a interrogation dated March 2, 2021:

Q: Regarding the Naxal incident of Bhima Koregaon, what conversation did you have with P Koya?

A: There was no conversation between myself and P Koya regarding the accused in Bhima Koregaon. I have shared information and news reports after he asked me about it.

Q: Do you write articles after getting instructions from those who are associated with PFI?

A: Not a single person from PFI has ever instructed me to write any piece. Neither have I ever written something because they told me to do so.

Q: Who all do you know at PFI?

A: I am familiar with members of PFI only in the capacity of a journalist.

Among the attachments with the chargesheet is Kappan’s recently-updated resumé. In it, Kappan has listed that he had worked as sub editor and later as bureau in-charge at Thejas Daily between May 2015 and December 2018.

Yet the UP STF remains convinced that Kappan receiving messages from Koya is mysterious, even though one would expect an editor to be in communication with their junior colleagues. Similarly, despite Kappan having included Dalit issues in his areas of interest, UP STF refuses to entertain the possibility that Kappan was going to Hathras on assignment. 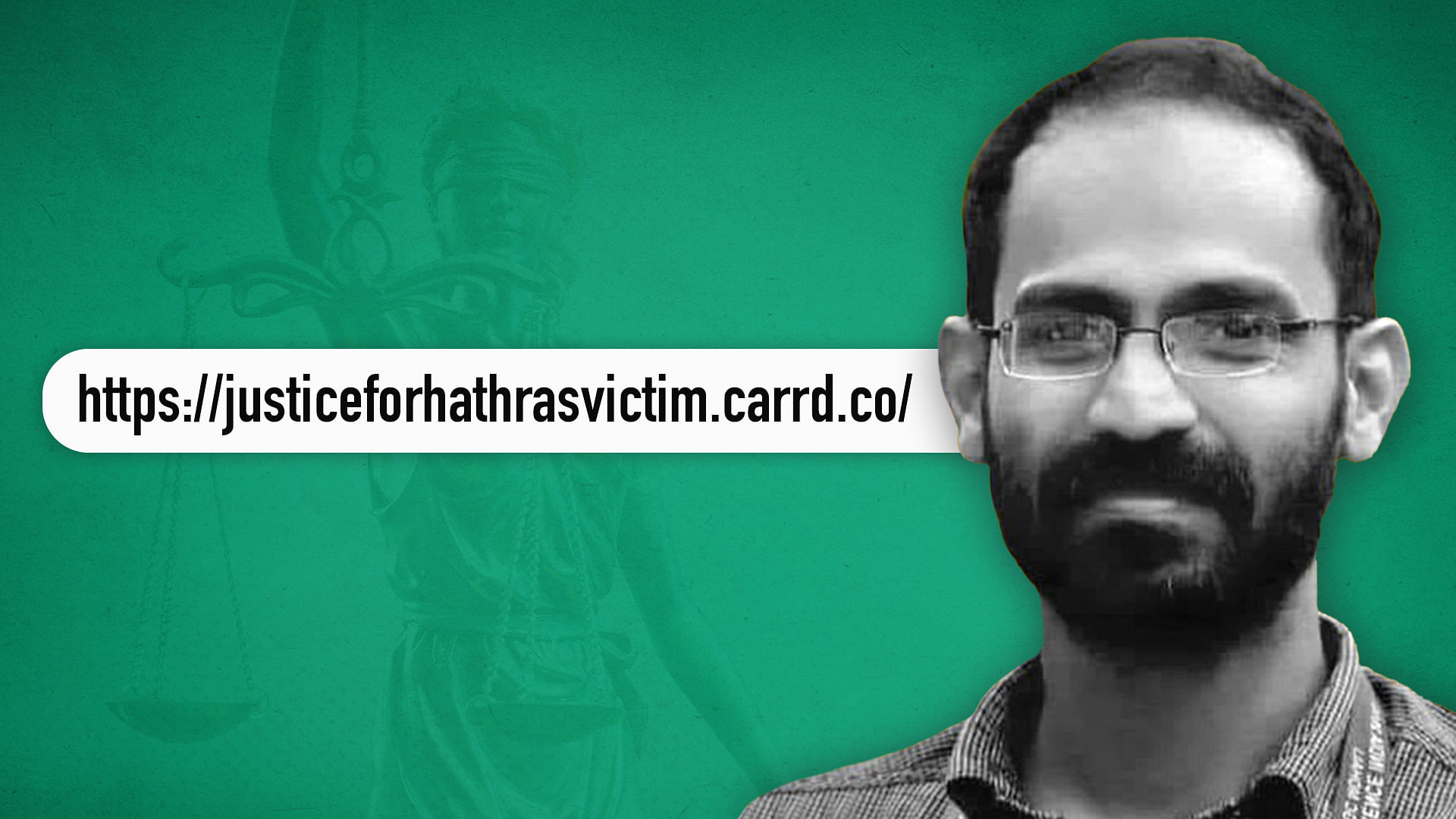