Plunder of the Aravallis

The other Raisina hill: 350 environmental violations and a gaping wound in the Aravallis

Despite notices and threats from authorities, the farmhouses remain and the area’s forest cover shrinks.

There are two Raisina hills in the national capital region. One is in Delhi and famous for being home to some grand examples of Indo-British architecture, like the Rashtrapati Bhavan and Cabinet Secretariat. The other Raisina hill is outside Gurugram, in Haryana; home to more than 100 farmhouses and other constructions, most of which are illegal.

The Raisina hill in Delhi is the beating heart of government administration in India. Raisina village in Haryana, which is now known as Ansals Retreat, is the site of 350 violations of the Environment Protection Act and a gaping wound in the Aravallis. Here, what should have been 1,200 acres of protected forest land is now studded with palatial homes, swimming pools and manicured lawns.

From Raisina hill to Ansals Retreat

In local memory, Raisina village’s history goes back to the British Raj, when villagers are said to have killed an English soldier. The colonial government avenged the murder by auctioning off the village’s common land, which included a hill, to a wealthy local from a neighbouring village. In the 1980s, the land was sold to Ansal Properties and Infrastructure (API) Ltd.

In June 1989, the hill was christened Ansals Aravalli Retreat and API Ltd began developing the area by selling off parcels of either one or two acres.

In 1992, to protect the ecologically sensitive Aravallis, the ministry of environment and forests introduced what is colloquially called the Aravalli notification. Following the notification, cutting of trees was prohibited and industry, mining, construction and electrification on forest land required government permission as it came under EPA. The order applied to Gurugram in Haryana and Alwar in Rajasthan, and covered five categories of land (hills, rocky valleys, ravines, pastures and foothills). Raisina hill, where Ansals Retreat is located, comes under this notification, which is enforced by the Haryana State Pollution Control Board.

Gurugram-based environment activist Chetan Agarwal said the Aravalli notification was brought in specifically to curtail construction at Raisina hill. “In the 1980s and early 1990s, activists from Delhi had moved the Supreme Court to stop the work on forest land on plots sold by Ansal,” he said. “The court asked the environment and forest ministry what they’re going to do about it. The ministry’s response was the order brought out in 1992.”

As of 2021, according to company records, Ansals Retreat had 675 farm plots, of which 457 were one acre and 218 were two acres. At least 108 of these have raised farmhouses on their land. The majority of these are illegal.

Is it a hill or a ‘gairmumkin farmhouse’?

As a counter to the accusations of illegal construction, farmhouse owners of Raisina hill have attempted to secure immunity from EPA. They’ve pointed to the altered status of the hill in traditional revenue records, which date back to undivided Punjab, from before 1947.

Among the five categories of land protected by the Aravalli notification is “gairmumkin pahar”, or uncultivable mountain. Certain areas in Gurugram (then Gurgaon), like the hill in Raisina, were classified as “gairmumkin pahar” in revenue records as of May 7, 1992.

However, in the mid-2000s, in the case of Ansal Properties and Infrastructure Ltd & Ors vs Haryana State Pollution Board, it emerged that the status of the Raisina hill in Haryana’s revenue records was not “gairmumkin pahar”, but “gairmumkin farmhouse”. The change allegedly occurred in 1991.

The farmhouse owners took this distinction to court and argued that the Aravalli notification did not cover their properties, and they deserve immunity from prosecution under the EPA.

Farmhouses at the retreat.

During the case, the Haryana State Pollution Board told the Punjab and Haryana High Court that “the land in dispute situated in village Raisina was depicted as Aravali Gairmumkin Mountain (Pahar) in the revenue record from the very beginning”. It alleged revenue officers had “illegally changed the revenue record” to show the hill as a “gairmumkin farmhouse”.

In 2007, the Punjab and Haryana High Court accepted this argument and ruled that the manipulated records were “stray”, “void” and “deserve to be outrightly ignored”. The hill in Raisina was restored as “gairmumkin pahar” in official records.

Nearly three decades after the Aravalli notification, despite legal prohibitions, constructions continue unabated at the Ansals Retreat. What should be forest land has schools, clubs, tubewells and multi-storeyed farmhouses on it. While the nearest village, Tikli, is a cluster of puddles, crater-filled roads and uneven speedbreakers, Raisina hill has better concrete roads than most high-end Delhi neighbourhoods. It also has poles with electricity wires and sturdy pipes for water supply – all of which are of questionable legality.

In 2019, the Indian State of Forests report announced a marginal increase in forest cover in Haryana between 2017 and 2019. The state, which has the lowest forest cover in the country, reported an increase from 3.59 percent to 3.62 percent, but the 0.03 percent green increment fell way below the national average of 0.56 percent.

The figures for Gurugram were particularly alarming. The 2019 report stated that the district, which enjoys a notification to protect forests, lost 0.82 square kilometres of forest cover between 2015 and 2017 – more than any other district in Haryana.

In 2020, the Haryana State Pollution Control Board told the National Green Tribunal that it had filed 513 prosecution cases of violation of the Aravalli notification. In a list detailing 425 such cases, 350 had addresses on Raisina hill, in Ansals Retreat.

When Newslaundry visited the hill in mid-December 2021, boundary walls were being rebuilt and iron gates had been installed. Palatial, multi-storeyed farmhouses, protected by high walls and intimidating gates, were scattered across the area. Some are owned by advocates and doctors, others by colonels and cricketers. Inside, the natural vegetation has been replaced by manicured lawns and swimming pools. One property had a stable (with horses).

Around another property, blue temporary panels had been erected. Workers at the site told Newslaundry they had been employed to level the earth and build a farmhouse.

Fakruddin, the facility manager of Ansals Retreat’s residents welfare association (RWA), said there are only 10 families that live here permanently. Most owners live in Delhi or Gurugram and these farmhouses are their weekend retreats or vacation homes.

According to Fakruddin, who has worked with the RWA for more than a decade, nearly every property has received a notice from the Sohna administration. “The notices usually say that the structure you have erected is illegal and warn that the owners should demolish it themselves, else the municipality of Sohna will demolish it,” he said.

The notices were issued after an October 2018 verdict by NGT in the cases of Sonya Ghosh vs State of Haryana and Haryana Welfare Society vs Union of India. The tribunal ruled, “any construction raised on the forest area or the area otherwise covered by [Aravalli] notification...without permission of the competent authority (after the date of the said notification) has to be treated as illegal and such forest land has to be restored.”

Strong as the verdict may sound, it has had little effect on the residents of Ansals Aravalli Retreat. So far, no demolitions have been carried out despite the threat in the notice.

Meanwhile, Fakruddin said nearly half a dozen inquiries to buy plots at Ansals Retreat come in from interested buyers every week. “The rate of property here is Rs 70 lakh an acre. Buyers pay five to seven percent tax on it,” he said.

Denuding hills like the one in Raisina of their natural vegetation has damaging consequences. The Aravallis are not a continuous mountain range. In Haryana especially, the forests connect one hill to another like ecological ligaments. The loss of vegetation on these geographies has led to soil erosion and also helped the desert from the west creep into Haryana.

A 2017 study by the Wildlife Institute of India on the Aravallis detailed the magnitude of the crisis. “The excessive deforestation has intensified the process of soil erosion, causing siltation in the river channels and water reservoirs,” it noted. “The interpretation of remotely sensed data products of 1972-75, 1982-84, 1994-96 and 2005-07 has revealed that the desert sand is drifting towards northeastern plains through twelve identified gaps on the Aravalli hills extending from Magra hills in Ajmer district to Khetri-Madhogarh hills in Jhunjhunu district and northern most hillocks in Mahendragarh district of Haryana.”

Two years later, in October 2019, the RWA of Ansals Retreat approached Haryana Electricity Regulatory Commission to complain about the poor connections provided by South Haryana Electricity Board. According to the RWA’s petition, since 1992 the hill has had 300 electrical connections, aided by approximately 1,200 electrical poles. The government electricity board makes Rs 10 lakh a month from these connections, in addition to each pole generating a revenue of Rs 50,000 – taking the total revenue earned by the electricity board to Rs 1.80 crore every year.

Roads, electric poles and tubewells at the Aravalli retreat.

It’s worth noting that the Aravalli notification prohibits “electrification (laying of new transmission lines)” and “construction of any clusters of dwelling units, farms houses, sheds, community centres, information centres and any other activity connected with such construction (including roads a part of any infrastructure relating thereto)” on forest land.

In 2013, one Leena Mishra, who owned a one-acre plot at Ansals Retreat, moved court against the state’s pollution control board. Mishra claimed she had been “falsely implicated” in a complaint registered under EPA.

The petitioner alleged there was no unauthorised construction on her property, except for 82 poles for fencing, one steel gate with pillars and four strands of barbed wire. The state’s pollution control board told the High Court that “an attempt had been made by the landowners” at Ansals Retreat “to get the kind of land changed in connivance with the revenue officers by illegally circumventing the Aravalli notification.”

Judge Ritu Bahri dismissed Mishra’s petition, noting that the installation of 82 poles and one steel gate with pillars comes under the clause of “any other activity connected with such construction” in the Aravalli notification.

Newslaundry reached out to Rajesh Vats, the vice president of the RWA club that maintains the retreat, to ask him about the construction work at the hill. “I am not the right person to talk about this,” he said. “You should ask the municipal council of Sohna why constructions happen here and with whose sanction.”

According to Fakruddin, there are now 17 kilometres of roads in the premises of Ansals Aravalli Retreat. Water, he said, is drawn from 12 tubewells in the hill.

Anand, an engineer who has worked at the retreat for over three decades, has a contrarian view. He believes the farmhouse owners at the retreat have protected the environment rather than harming it. “When I came here to work for Ansal in the late ’80s, you could see through the mountain,” he recalled. “There were only rocks and hardly any vegetation. Today, if we have green cover, we owe it entirely to the people who live here. They planted and nurtured the vegetation in the area.”

Contribute to our upcoming Sena project, Assembly Elections 2022, and help to keep news free and independent. 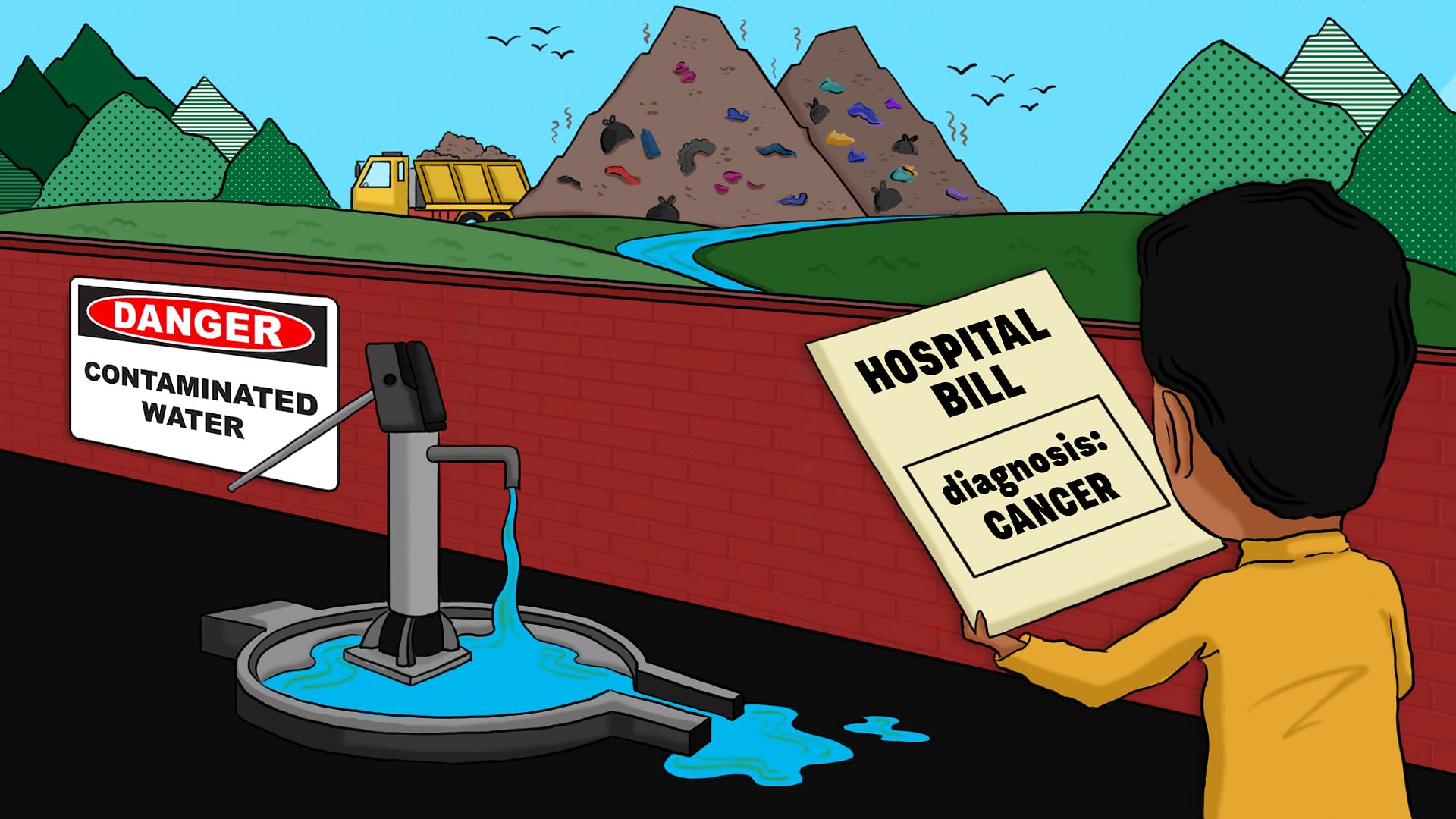 Plunder of the Aravallis: Bandhwari village and its garbage mountain of maladies