‘Brahmin self-respect’ vs ‘vikas’: Why UP’s Chillupar and Sadar may vote differently

Discontent runs deep among some Brahmin voters, though the Muslim community seems committed to ‘Maharajji’.

“Voting this time will be on the basis of Brahmin swabhiman, self-respect,” said Kunal Chaturvedi, 27. “Vikas, development, is a separate issue.”

Kunal, a teacher in Uttar Pradesh’s Gorakhpur, is one of 80,000 Brahmin voters in Chillupar constituency, which goes to the polls on March 3. With 25,000 Bhumihars, 40,000 Yadavs, and 12,000 Nishads, Chillupar is a “power centre” for the Brahmin community, and has had a Brahmin MLA since 1985. In 2007, 39 percent of Uttar Pradesh’s Brahmins voted for the BJP in the assembly election. Ten years later, during the 2017 election, this percentage rose to 80.

Gorakhpur has nine constituencies, and the Bharatiya Janata Party won eight of the nine seats in the 2017 assembly election. Only Chillupar had voted for the Bahujan Samaj Party and its sitting MLA, Vinay Shankar Tiwari, recently quit the party and joined the Samajwadi Party.

In keeping with past trends, both the BJP and the Samajwadi Party have fielded Brahmin candidates. The SP candidate is sitting MLA Tiwari, the son of former Chillupar MLA Hari Shankar Tiwari. The BJP candidate is Rajesh Tripathi.

Newslaundry met with some of Chillupar’s Brahmin voters to see how the sentiment swings this election.

A change of heart

Vishal, who works as a sales executive with a private firm in Gorakhpur, shared his brother’s disillusionment with the Adityanath government in Uttar Pradesh.

This disenchantment stems in part from the death of one Vivek Tiwari in September 2019. Vivek, who worked with Apple in Lucknow, was allegedly shot dead by a police constable; the police first claimed it was self-defence before arresting two constables in connection with the murder.

Then there was the controversial death of gangster Vikas Dubey in an “encounter” in July 2020. Last year, a panel concluded that Dubey had been patronised by local police, among others, and recommended an inquiry against “erring public servants”.

“There is goondaism under this government, so much so that people are scared of the police,” Vishal said. “The Brahmins should realise the importance of their vote and make a choice accordingly.”

“People from a particular caste have been appointed for higher posts under this government,” he said, an oblique reference to Adityanath, a Thakur, and appointments made from the Thakur community.

However, he said he admired the efforts of the Modi government in working towards “one rank, one pension” for army personnel. Digvijay also disagreed that Vikas Dubey’s death was a trigger of discontent, saying, “He was a criminal. But the court should have had the final word in his case.”

Women and youths, however, had different concerns.

“Price rise, whether it’s cylinder or mustard oil, is an issue for us,” said Digvijay’s wife Durgawati. “There are no jobs under the BJP government as well.”

The couple’s grandson Prashant, 22, told Newslaundry he’s been trying to secure a government job, but with no success. “I had appeared recently for an exam for the post of sub-inspector,” he said. “When the answer key was released, there were around 10,000 candidates who scored full marks in general studies. How is that even possible?”

The sub-inspector exam in question was conducted by the UP police recruitment board in November and December last year. Many candidates pointed out discrepancies, which the board called “baseless”.

“I know now that due to the paper leak, the result for this exam will take another two years,” said Prashant wryly.

Prashant, who has been trying to secure a government job.

A difference in ideology

In Tada village in Chillupar, lines of red and green flags, all bearing the SP’s electoral symbol of a cycle, lead the way to a Tiwari ka hata – a courtyard surrounded by walls or houses.

For the past few years, the hata’s residents, predominantly Brahmin, have been at loggerheads with the village’s Gorakhnath mandir mutt, a traditionally Thakur association. This tension dates back to the 1970s, when Adityanath’s predecessor, mahant Digvijay Nath, locked horns with Hari Shankar Tiwari.

Since the 1980s, Tada has been the turf of Hari Shankar Tiwari, a Brahmin. Tiwari was a student leader in the 1970s, then a “gangster” in the 1980s, before donning the mantle of politician – first as an independent, then with the Congress, and then the BSP. His issues with Digvijay Nath were reportedly on appointments to Gorakhpur University.

Four decades later, his son Vinay Shankar Tiwari is trying to build a niche for himself as an honest neta who works for the welfare of the people. His door-to-door campaign involves distributing a four-page pamphlet that details his work as Chillupar MLA, such as constructing roads and setting up power sub-stations in the constituency.

The junior Tiwari also does not shy away from admitting his concern for Brahmin interests.

“Not just Purvanchal, but Brahmins across the state of Uttar Pradesh are feeling neglected,” he told Newslaundry. “The BJP government has only exploited the Brahmins. Be it the Unchahar mass murder [2017], Vivek Tiwari’s murder in Lucknow, or Ankur Shukla’s murder in Gorakhpur [2021], this government did nothing.”

Vinay also insists that all is well between the Brahmins and Thakurs here. “There is no friction as such between us but there is a difference in ideology,” he said. “While they [the mutt] have a conservative mindset, we think about sarv samaj, everyone.”

Meanwhile, a very different kind of dynamic is playing out between Muslim residents near the Gorakhnath mandir. This neighbourhood falls under Sadar or Gorakhnath Urban constituency, where chief minister Adityanath is contesting on an assembly seat for the first time.

A poster in Kaif-ul-Wara's shop.

A row of shops stands metres away from the mandir’s main gate. Their signboards identify them as predominantly Muslim-owned.

Newslaundry met with Chaudhary Kaif-ul-Wara, who owns a utensil shop here and is the chairman of the Uttar Pradesh Urdu Academy, a group that works to promote Urdu language. Kaif-ul-Wara refers to Adityanath as “maharaj”, since the chief minister is also the head of the mutt.

“Whenever there is an issue, we approach the mandir,” he said. “And this time, Maharajji will get support from every quarter, irrespective of caste or religion.

This reverence for a firebrand Hindutva leader might be peculiar, but the community here functions under the umbrella of the mandir. Pawan Kumar Tripathi, a member of the Gorakhpur Development Authority, told Newslaundry, “We are committed to the welfare of Muslims and do hope their voting percentage in favour of the BJP increases up to 40 percent.” According to this small survey, the BJP secured two percent of the Muslim vote in 2017.

Importantly, the BJP at the centre launched multiple schemes that benefit locals, such as free rations and affordable housing.

“If it was not for free rations then we would have died of hunger,” said Firdousia Khatoon, who received a house under the PM Awas Yojana. She earns Rs 50-60 a day, making reels for thread that sell at Rs 10 per kg.

Her sister-in-law, Meena Khatoon, agreed, though she said she’s concerned about the rise in prices. “We struggle to save any money,” said Meena, whose husband works at a weaving loom. “And there are not enough job opportunities in the area.”

Kaif-ul-Wara is cautious when asked about Adityanath’s decisions that might be construed as targeting a particular religion, such as rigorous punishment for cow slaughter. “Cow slaughter was always banned in Uttar Pradesh,” he pointed out. “Only those with licences can carry it as a trade. Maharajji is taking action only against illegal slaughterhouses.”

When asked what he thinks of Adityanath using phrases like “kathmulla”, he said, “Those Muslims who are at a distance may consider him as a kattar. We know him closely.”

With inputs from Amar Rai in Gorakhpur. Pictures by Akanksha Kumar. 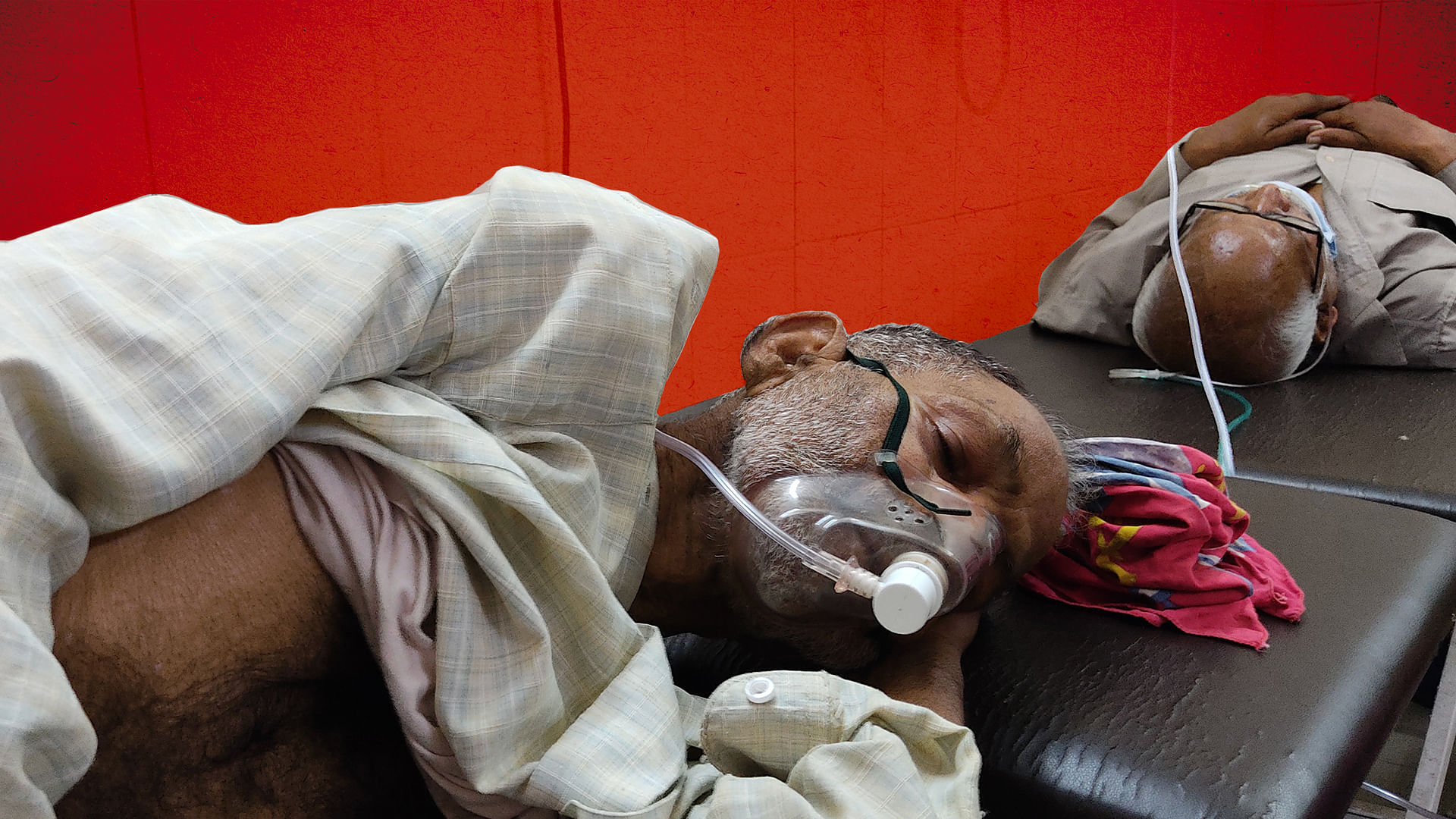