There are only six spots left for open namaz, down from 150 in 2018, while no action has been taken against Hindutva groups.

This Ramzan, Soban Usmani is offering jumma (Friday) prayers once every three weeks. Till last year, Friday prayers didn’t pose a challenge because he could pray at the park next to his office in Sector 34 of Gurugram. However, since Hindu “activists” raised protests over namaz being done in open spaces, Usmani now goes to the mosque near his home.

“The mosque is more than an hour away from my office, so I can’t travel in the 30-40 minutes of lunch break that I get,” said Usmani. Since Islamic doctrine forbids skipping more than three consecutive Friday prayers, the best he can do is to take the day off every third Friday to do namaz at the mosque.

The namaz protests in Gurugram made headlines in October 2021, but they weren’t the first time Muslims had faced the ire of right-leaning Hindu groups in this “millennium city”. In 2018, the Sanyukt Hindu Sangharsh Samiti, an umbrella body comprising local units of 22 Hindutva groups, along with other right-wing protestors had disrupted namaz in the area.

Last year’s protests were led by the same amalgam.

“What happened in Gurugram last year has reinforced the fear [of Muslims being targeted],” said an IT professional, who requested anonymity. “Bigotry has become fashionable in the mainstream. People used to hesitate to say certain things openly, but now it is accepted by the public.”

For Muslims in Gurugram, the changing attitude has meant increased restrictions.

“We are five lakh Muslims and there are 12 mosques in all of Gurugram. Even if we do 10 jummas in the time we can offer namaz, we all won’t be able to read,” said Mufti Mohammad Saleem, president of the Jamiat Ulama in Gurugram.

The aftermath of protests

In a statement made in December 2021, chief minister of Haryana, Manohar Lal Khattar, said “the practice of offering namaz at public spaces will not be tolerated as it is leading to controversies and confrontations”. Khattar’s comments came after Hindutva groups protested namaz in open spots in October 2021.

A parking lot in Sector 47 became a communal hotspot in Gurugram last year. Until last October, this lot had seen hundreds of Muslims gather on Fridays to offer congregational prayers. With the outbreak of the namaz protests, the parking lot saw large groups of locals from resident welfare associations and right-wing organisations disrupt the congregational prayers. On Fridays, loudspeakers started blasting Hindu devotional songs just a few feet away from where the Muslims knelt to pray.

“Musalmano ka dil dukkha [Muslims were heartbroken],” said Saleem of last year’s protests. “Some have either left Gurguram or are planning on leaving. However, throughout the agitation, we didn’t let things escalate. In no video will you see Muslims getting angry and retaliating.”

One reason given by the protesters for opposing namaz at the parking lot in Sector 47 was that they wanted a market built on that spot.

Sunil Yadav is the president of Sector 47’s RWA. He also led the agitation against namaz being offered at the parking lot. “Doing namaz in the open is wrong. Now it has been stopped here,” he told Newslaundry.

When asked about the plans to build a market at this spot, Yadav said the process was yet to begin. “It’s government land so making the market here is the government’s work,” he said, admitting that the RWA had not taken any steps to initiate the demand for a market since October last year.

Speaking to Newslaundry soon after the onset of the Muslim holy month of Ramzan, Mufti Mohammad Saleem (who is also the imam at a mosque in Palam Vihar) said people had been calling him to say they were finding it difficult to offer prayers on Fridays as there are so few places where open namaz is allowed.

Altaf Ahmad of the Gurgaon Nagrik Ekta Manch said the 12 mosques in Gurugram were doing their best to accommodate everyone who was observing Ramzan, but it was challenging. “Namaz is happening multiple times in some places. For example, at Anjuman Jama Masjid, it [namaz] was [held] just once a day earlier. Now it’s happening five times a day. People are struggling for space,” Ahmad said.

This year, days after Ramzan began, Dinesh Bharti, a Hindutva footsoldier who has gone to jail at least three times for disrupting namaz, submitted a memorandum to the Gurugram police, in which he claimed namaz was being offered in the open at 12 to 15 places.

Bharti told the media he would “give” Gurugram authorities two to three weeks to stop namaz from taking place at these spots. If they fail to act, Bharti has threatened to open gaushalas at those spots. He has said he will continue agitating against open namaz until the practice is forbidden across Gurugram, Delhi and eventually India.

Gurugram’s commissioner of police Kala Ramachandran dismissed Bharti’s statements as antics, describing him as an “exception”. Ramachandran also claimed there was no dissatisfaction among Gurugram’s Muslim residents about the number of spots for open namaz.

“The six spots in Gurugram and two spots in Manesar [for open namaz] were decided in consultation with the administration and members of the community,” she said. “Since then, we have not received any request for an increased number of spots. The situation is peaceful and the community is satisfied.”

However, Saleem told Newslaundry that he’d met the commissioner of police in Gurugram on April 1, to request provisions be made to ensure the safety of Muslims observing Ramzan and also verbally requested that the number of open namaz spots be increased.

Ramachandran said she had received requests for additional police presence during Ramzan.

“I don’t really see any merit in requesting the administration to increase the spots since the chief minister himself had said it shouldn't happen and the administration will sing the same tune,” said Ahmad. He added that saying or doing anything to challenge the status quo would “give fodder to hooligans to create a ruckus”.

People leaving after offering prayers at Choma Masjid in Palam Vihar on Friday.

The Muslim residents who spoke to Newslaundry seemed to all agree that the atmosphere in the city felt oppressive and the only survival tactic was to lie low.

“When right-wing people come and create problems, we tell the imams not to conduct namaz. We don’t want conflict. We don’t want to fight,” said Saleem.

The IT professional who requested anonymity, moved out of Gurugram in January this year. He said that even before last year’s namaz protests, there was a sense of insecurity within his community. His father advised him against wearing a jacket that had his name on it and told him to make sure there were no obvious markers of Islam in his car. That need to be more careful has intensified after the namaz protests.

“I’m told to be a little more careful outside, not to get into trouble, brush things off even if it's someone else’s mistake. But why should I have to justify my religion everywhere?” he asked.

“There’s a lot of pressure on the minds of the community. It started with namaz but the recent incidents of hijab [ban], targeting in movies and during Navratri have made it worse,” said Ahmad.

It doesn’t help that action has not been taken against Hindutva groups that have been accused of hate speech. On November 26, 2021, Saleem had written a letter to Gurugram’s deputy commissioner, urging him to take cognizance of the “provocative speeches and slogans made against Muslims” last year on November 5, when a Hindu Right-wing group organised a Govardhan puja in Sector 12A, to protest namaz being offered at a particular spot.

The letter named Bharti and Sanyukt Hindu Sangharsh Samiti’s Kulbhushan Bhardwaj and Mahaveer Bhardwaj, but no action was taken by the police.

Instead, a first information report was filed on January 4 against Saleem, and against Mohammad Adeeb, former member of the Rajya Sabha, for “disrupting communal harmony” and “trying to grab land”. Adeeb had moved the Supreme Court in December last year, seeking contempt action against the chief secretary of Haryana and director general of police, for not taking action against the agitating Hindutva groups.

On April 5, the Punjab and Haryana High Court restrained the Gurugram police from taking any coercive action against Adeeb.

“The only solution [for Muslims in Gurugram] is to be super low-profile,” said the IT professional. “Live a peaceful life. We don’t want to get into arguments.” Who are the Hindutva activists at Gurugram’s namaz disruptions? 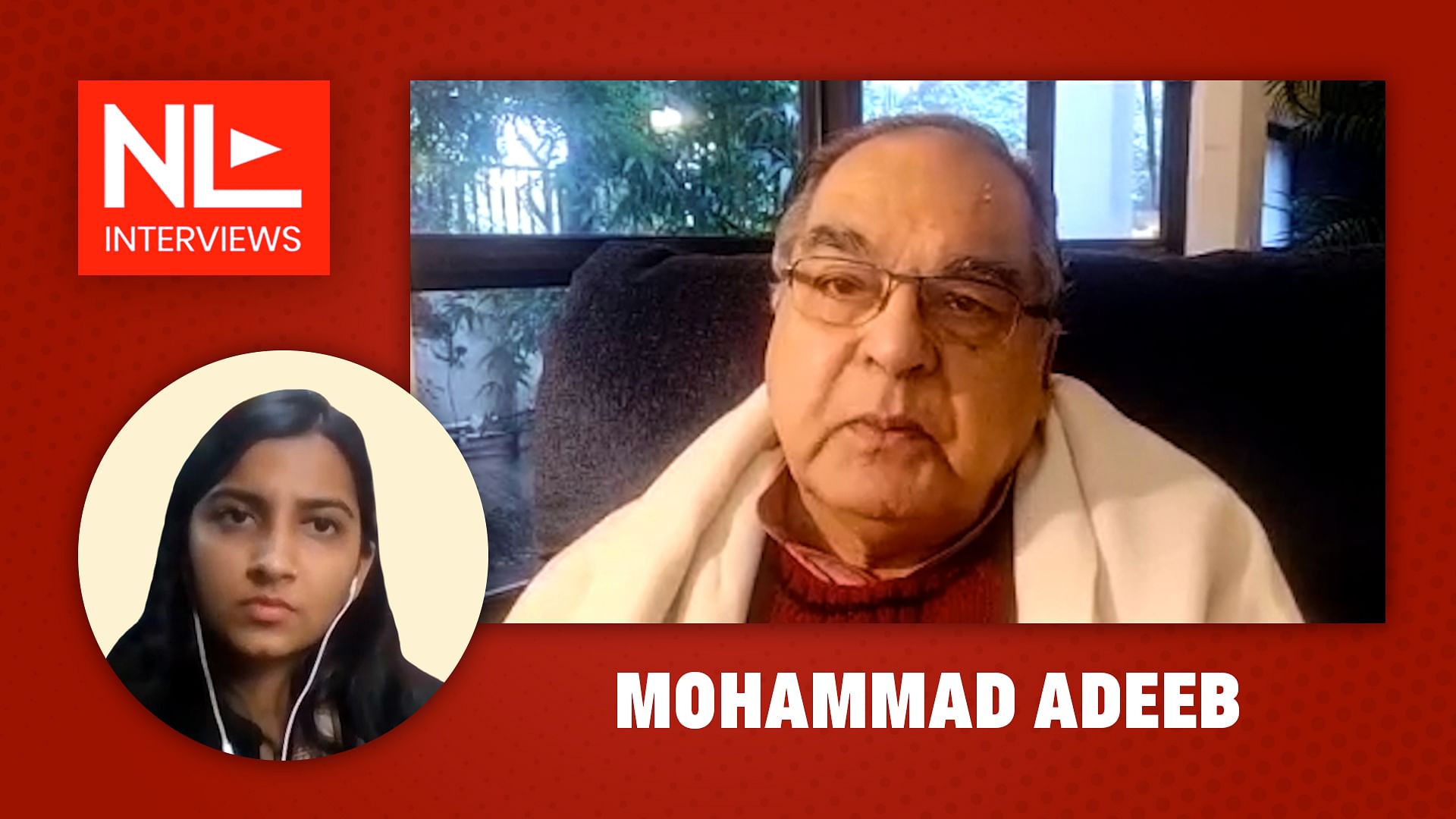