Bhadas4Media: Hindi media watchdog that thrives on guts and gossip

What started as a blog to vent the frustrations of a newsroom is now the cheeky voice of India’s mofussil journalists.

The first time Yashwant Singh was paid to write was in the 1990s. A hormonal revolutionary with the All India Students’ Association, or AISA, the student wing of the Communist Party of India Marxist-Leninist, he had been sent to the Banaras Hindu University to propagandise for the party. “I wrote an article about how disputes were settled in villages,” he said. “And had given the example of my uncle, the arbiter in our village, who would favour the party that gave him more meat and alcohol.”

It was published in Saras Salil, a Hindi fortnightly whose commentary was as social as it was sexual, and Singh earned Rs 250 from it. “I got a call from my uncle a few days later,” he recalled. “He said if I come home, he’ll break my bones.”

It is no surprise that a man who once publicly lambasted his family now openly castigates his fraternity. For 13 years, Singh, now 49, has been the editor of Bhadas4Media, or angst against media, a news website that tells the inside stories of India’s Hindi newsrooms – tales of eccentric editors, nosy owners and broke reporters. In his modest apartment in a Greater Noida society, Singh shows off statistics from the website backend: in May 2022, it had 2.9 million impressions – number of pages visited by users – and more than 86,000 unique visitors.

The Hindi language market is the most dominant news market in India. According to the Office of Registrar of Newspapers, in 2020-2021, Hindi publications sold nearly 19 crore copies on a publishing day on average, cornering a thumping 49 percent of the total market. Its closest competitor, English, stood at 9 percent. The Hindi news genre enjoys a similar grab on TV – 43 percent of the news market, according to a 2018 estimate by the Broadcast Audience Research Council, or BARC.

Bhadas exists within this thriving industry as a bare knuckled troublemaker. In the last few months, it leaked the alleged audio of an advertising official at Dainik Bhaskar haranguing a client for ads, reported on an FIR against Amar Ujala and Dainik Jagran for writing about an alleged “sex CD” of a Bharatiya Janata Party politician, broke the story of a woman who attempted suicide after allegedly facing harassment from a Bharat Samachar journalist and wrote about the high-profile editorial shuffling in the UP editions of Ujala.

Such scoops have had consequences. Singh claims that there are 56 cases against the website. In 2012, he spent 68 days in an Uttar Pradesh prison after facing charges of harassment and intimidation from a fellow journalist. For him, it was because of “the combined efforts of influential journalists he had pissed off”. That year, Bhadas was also restrained by the Delhi High Court for lampooning one Nirmal Baba, who had asked his disciples to eat masala dosa to overcome misery.

Bhadas, says its website, “sheds light on the good and bad in the media, represents the plight of the ordinary journalists, and brings out the stories censored by the mainstream corporate media”. But it did not begin with any such ambitions.

Bhadas was conceived in the Noida newsroom of the Hindi daily Dainik Jagran in 2008, where Singh was employed at the time. “It emerged as a Hindi community blog in an era when editors thought they were overlords,” Singh mused. “A Hindi journalist was treated like a second-class citizen in the industry. The blog allowed members, usually journalists, to join and write anything. The posts often turned abusive, but it slowly became a vent for professional frustrations.”

Today, Singh says he has a contact in every Hindi newsroom in North India. If an editor abuses a reporter in a newsroom in Ranchi, or a journalist is unfairly let go by her bureau in Bhopal, the news eventually travels to Singh and then to his website.

“For the long time, Bhadas was the only website where Hindi journalists could read about the state of their own industry,” Om Thanvi, a seasoned editor, told Newslaundry. “It monitored the Hindi media and knew its character, and so did its readers.”

“I know stringers and reporters who, when they face problems at work, want to reach out to Bhadas,” said Saurabh Sharma, an independent journalist based in Lucknow. “The website has become a voice for a class of journalists who did not have a voice earlier.”

From Ghazipur to Greater Noida

Born in Ghazipur in eastern UP, Singh comes from a family of army officers. Like most young men from the region, he wanted to join the Indian Administrative Service as a student, and showed promising signs. But a drive to be “another Bhagat Singh” overtook him in his early 20s and he instead joined the leftist student circles like AISA.

It was at AISA that Singh met Gopal Rai, then an activist at Lucknow University and now Aam Aadmi Party minister in the Delhi government. “Rai was part of the Anna movement and I had access to him,” Singh said, “Bhadas used to cover the movement regularly, almost doing his branding. That provided an early boost to the website’s readership.”

Singh’s leftist training took him and Bhadas to agitations to protect the rights of mediapersons, like the protests following mass layoffs at CNN-IBN in 2012, or the fraternity’s call for higher wages for journalists. “I wanted to keep activism alive,” he said. “And that’s why Bhadas became a cooperative of Hindi journalists.”

But Singh’s love for the pen was as well known as his love for the pint. The Bhadas editor does not pretend to hide his drinking habit. In fact, whiskey and soda make regular cameos on the website’s social media during the editor’s cocktail hours. “There are days when the website has no posts,” Singh remarked wryly. “Those are the days when I’ve had two drinks too many.”

But Singh lost his first job because of Bhadas, not Bagpiper. When he began blogging, Jagran, India’s biggest selling daily, did not take a charitable view. For one, the blog gave ample space to anti-Jagran opinion. “It was a big mess,” Singh said. “In 2009, they fired me, and to make it worse, no one would hire me because of the blog’s reputation.”

As Singh’s Jagran gig went kaput, he quit journalism after 12 years in the profession. He joined a company that sold scratch cards to godmen but paid better. But the journalistic vein still throbbed. So for a paltry Rs 3,500, the journalist-turned-salesman registered the domain name www.bhadas4media.com on WordPress and resumed writing after work. It was inspired by Exchange4Media, a news website that reports on media and marketing in India. In the same year, Singh quit the marketing job and returned to journalism.

Advertising, donations and other favours

On any day, Bhadas publishes at least five articles, but it can go up to 10. The writing is quintessentially irreverent, often derisive, but not strictly journalistic – often there are poems, like on environment, or a sleazy piece on the private life of a politician, or even a job opening. The Bhadas4Media YouTube channel, with nearly 2 lakh subscribers, can be more erratic, with videos of Singh swimming in the Ganges or cooking his favourite pakode.

According to Singh, the entire operation is low-maintenance. “At any point, the Bhadas bank account has no more than Rs 30,000,” he explained. “It takes Rs 10,000 a month for the website’s technical maintenance and the rest for the journalism.”

The founding editor claims that the website is largely sustained on crowdfunding, but two senior journalists underwrite most of the donations. “I can’t reveal their names but they believe in the work Bhadas does,” Singh said. “Even my iPhone and touch laptop is a gift from them.”

A decade ago, advertising revenue was adequate to run the website. In fact, Bhadas got its first ad worth Rs 2,000 in the year of its inception. It was from Radio Misty, a Bengali FM station.

Singh is candid about favours that might raise eyebrows. In 2009, for instance, an editor from Amar Ujala set up a meeting between Singh and Ram Vilas Paswan, the late Bihar politician who was then the steel minister. “The editor told Paswanji that I was a well known journalist who ran a website and needed funds,” Singh recalled. “By the end of the meeting, Paswanji pledged Rs 3 lakh to Bhadas over six months in ads from the Steel Authority of India Limited.”

Some journalism, some gossip

If a reader heads to Bhadas expecting rigorously cross-checked reporting, she might be disappointed. In many ways, the website still operates as a blog. Stories on media organisations or journalists often have no pretence of balance and seemingly rely on a single source.

Journalist Saurabh Sharma told Newslaundry that Bhadas only has “half-veracity”. “A lot of content on Bhadas is gossip in the media – which journalist is married to whom or which anchor is being poached by which channel,” Sharma said. “A good amount of it seems to have been published without due diligence. But then a good amount of it is also authentic.”

In July 2020, a Bhadas report alleged that the news channel ETV Bharat had turned into a “corona hotspot” because of nearly 20 Covid cases in its newsroom. Days later, the channel served a legal notice to the website, calling the report “false”, “baseless” and “without any manner of verification or authentication”. In a reply drafted a week later, Bhadas told ETV that it stood by the report and had “duly verified” the information “with individuals working at the establishment”. Ultimately, the channel, which wanted Rs 1.4 crore in damages, did not pursue the matter in court.

Asked about the quality of his work, Singh said that he had developed the habit of cross-checking his stories only in the last few years. “I don’t want to be dragged to court anymore,” he smiled, “so now I’m good at seeking comments. But if I publish 100 stories, I know 99 of them are factual.”

Thanvi offered a reason why the website could not operate with the quality of a newsroom. “Bhadas seems to lack varied stuff because it lacks resources,” he said. “It does not have a substantial editorial team with its own reporters and copy editors. It is mostly Yashwant’s sole efforts. That it survived despite the crunch means it is a considerable success.”

Despite reservations, Sharma believes that Bhadas is taken seriously in the Hindi speaking region. “The website has become a voice for a class of journalists who did not have a voice earlier,” he said. “For example, when journalists are not paid on time by their publications or channels, it is Bhadas that takes the lead in publishing the story, and as a result, they receive their wages.”

Thanvi lauds the website for taking a “progressive” and not a “communal” line on major media issues. Sometimes they lack certain discipline, for example the Delhi press club elections. But the big picture, he adds, is that Bhadas filled a vacuum in the Hindi media. “The problem with the Hindi media is this that it’s controlled very tightly by its owners,” he said. “And Bhadas has not been able to influence anything on that level. But it has had an impact on the news desk or field employees by making their concerns or grievances public. It’s good that they always took the side of working journalists, and not the owners.” 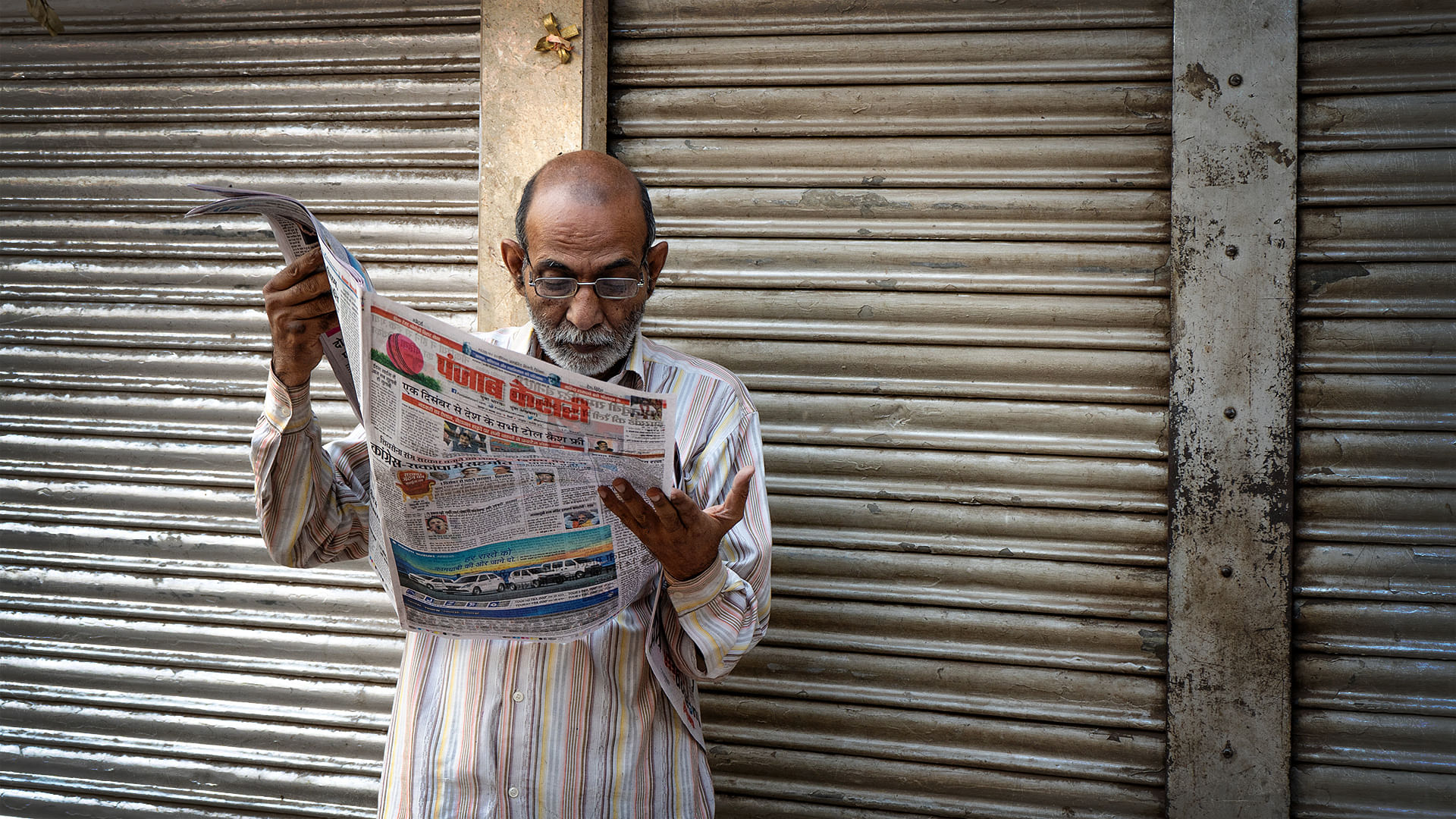 Looking back: How liberalisation shaped the Hindi press