He had several run-ins with the law, but his family’s influence kept him safe.

In 2007, when the Akshay Kumar film Bhool Bhulaiyaa released, protests broke out in pockets of the country. In Mumbai, a case was filed against the movie over a song that allegedly “hurt religious sentiments”. In Haridwar, members of the Akhil Bharatiya Vidyarthi Parishad, the student wing of the RSS, pelted stones at a shop after a protest against the film escalated. Leading the mob was Pulkit Arya, who was recently arrested in the murder case of Ankita Bhandari in Uttarakhand.

Ankita, 19, worked as a receptionist at a resort owned by Pulkit Arya in Yamkeshwar, Pauri. She was allegedly killed by Pulkit, manager Saurabh Bhaskar and assistant manager Ankit Gupta after she resisted their demands to offer “extra services” to guests. They had reported her “missing” until her body was found six days later.

The three men have been arrested and, according to the police, have confessed to murdering Ankita.

Back in 2007, Pulkit and his ABVP brethren purportedly “vandalised” a photo studio for not having a photographer available to take pictures of their protest. Pulkit was a minor then. According to the studio’s owner, Pulkit’s father and brother “came and started apologising, asking us not to complain to the police”.

While Pulkit was with the ABVP, his father and brother were members of the BJP. Both have been expelled.

“I wish we had complained then and he had gone to jail,” said the shop owner 15 years later. “Ankita might have survived.”

The photo studio that Pulkit vandalised.

Anecdotally, Pulkit has a chequered past.

In 2013, he enrolled at Rishikul Ayurveda College in Haridwar to pursue a Bachelor of Ayurvedic Medicine and Surgery degree. Three years later, the college’s director filed a case against Pulkit after he allegedly got another student to sit for his admission exam. He and 23 other students similarly charged were named in an FIR filed at Kotwali police station. They were charged under the penal code for cheating and forgery, among other charges.

Dinesh Chandra Singh, the current director of the college who taught Pulkit, told Newslaundry Pulkit and the others were barred from taking their exams. “Some of the students went to the high court, which said the students should not be stopped from studying while the investigation is underway. So, the students continued their studies but the university withheld their degrees.”

The matter is still pending in court, Singh added. An officer at Kotwali police station told Newslaundry the court is currently hearing arguments in the case.

Former teachers said Pulkit seldom attended class. Singh said, “I taught his class for a year. I clearly remember that he only came to class twice. He would be on campus but not in class.”

Another teacher, who said she briefly taught Pulkit too, said, “He used to record what I was teaching. I kicked him out of class. After that he didn’t return.” A third teacher said, “I saw his face only on the day of exams. He didn’t come to my class even for a single day.”

To know more about Pulkit’s work with the ABVP, Newslaundry visited the group’s office in Devpura. An ABVP worker told this reporter that Pulkit had never been an “active member” of the ABVP though he did “some work”. The organisation allegedly broke ties with Pulkit after the Bhool Bhulaiyaa protest.

Pulkit’s former college senior said Rishikul doesn’t have a student union and, as such, student organisations aren’t active on campus. “When Pulkit arrived, he raised the ABVP flag,” he said. “He was weak in his studies. The only purpose of his politics was to create a ruckus every time to extend the date of exams. Weak students supported him. But students serious about studying often used to say the protests were a nuisance.”

He said, “He used to demand attendance without coming to class and used to threaten the teachers when they refused to do it.” The teachers that Newslaundry spoke to said they hadn’t been on the receiving end of these “threats”.

One source, who had been the ABVP president at a Haridwar college, told Newslaundry he knew Pulkit during their college days.

“I haven’t met him for two and a half years,” he said. “He was drunk on money and power. Apart from the Bhool Bhulaiyaa case, he also fought a few times in college. But every time, his father used to apologise and save him.”

He added, “We never thought he would kill someone.”

When he left college, Pulkit took over his father’s business. Vinod Arya, who is originally from Roorkee, runs a company that deals in ayurvedic treatments.

An RSS member from Haridwar told Newslaundry the Arya senior studied dentistry “but his career didn’t take off”. “Then he started doing his father’s business on a large scale,” he said. “Simultaneously, he joined the RSS. It was the RSS who helped make him a minister of state.”

Vinod’s home is in Haridwar’s Arya Nagar. His ayurveda shop is locked. The local RSS office is located just behind his house. Here, RSS workers said Vinod had been associated with the RSS but “later switched” to the BJP. However, he still offers donations to the RSS on Guru Purnima.

Vinod was the chairman of the Uttarakhand Mati Kala Board with a state minister’s rank in the previous BJP government under Trivendra Singh Rawat. His son and Pulkit’s older brother, Ankit, also joined the BJP and was the vice-president of the state OBC commission.

Meanwhile, Vinod’s businesses were expanding. He started a swadeshi business and bought land in Gangabhogpur in Rishikesh from one Rupendra Sharma, currently the deputy director of the state education department. Pulkit worked in this business until he opened the Vanantara resort in Rishikesh about a year ago.

Initially, a Bengali couple ran the resort. They did a good job, said an anonymous source who worked with the couple, but Pulkit “began to pick fights with them”. “Then they left,” the source said, “and Pulkit himself started running the resort.”

Pulkit and his wife Swati took over the running of the resort. A labourer from a nearby village, who would be called to the resort whenever work came up, told Newslaundry she was last summoned on September 20.

“Madam [Pulkit’s wife] called me and said come, take your money,” the woman said on the condition of anonymity. “When we went there was a fight between Pulkit and madam. Pulkit was saying Ankita had run away. Madam replied, ‘I asked you a 1,000 times not to hire any girl. Now suffer the consequences.’”

The woman said she was sent away without payment. She never met Ankita, because her work was in a different building.

Ankita Bhandari’s parents live in the village of Barsuri, about 11 km from the Pauri district headquarters. Both parents took ill after their daughter’s death. Their landlady Sarita, in tears, told Newslaundry, “She was a very hardworking child...The monsters killed her. They should be hanged.”

In Barsuri, only a few families send their daughters away for work. Ankita was one of them.

“She was the first girl in my house who went out to work,” said her father Virendra Singh Bhandari. “They killed her after only 18 days. Look at our house – I was educating my children by working as a labourer. Ankita used to say that by earning money, she would build a house in the city. All her dreams were shattered.”

Ankita studied hotel management at Shri Ram Institute, Dehradun. On August 27, she told her parents there was an employment opportunity at a resort in Rishikesh.

“I asked her to leave after a couple of days but she said they might hire someone else,” her father said. “On August 28, I went to Rishikesh to drop her off. Some people from the resort picked us up near AIIMS Rishikesh; from there we went to the resort by car.”

He continued, “There, I met Pulkit for the first time. He talked to me properly. No other girl was there but I didn’t even imagine something like this would happen.”

Once she joined the resort as a receptionist, Ankita would frequently call home, Virendra said. “But the way she talked, it seemed like she wanted to leave,” he said, “although she never said anything openly.”

At 4 pm on September 19, Virendra’s relative Abhishek got a phone call from Pushp, Ankita’s friend.

“We ran to Rishikesh,” Virendra said. “There, Pulkit told us Ankita ran away. You know what happened next.”

Ankita’s phone was switched off from around 8 pm on September 18. Her body was found six days later in a canal. An initial postmortem report dated September 24 said she had suffered blunt force trauma before her death. The cause of her death was listed as loss of breathing due to drowning – further details are expected to be listed in the final postmortem report, which has still not been issued.

The three accused were arrested on September 23. A day later, after protests broke out over Ankita’s murder, the resort was demolished on orders from Uttarakhand chief minister Pushkar Singh Dhami. Dhami visited the Bhandaris on October 1 and gave them financial assistance of Rs 25 lakh. Ankita’s father said he asked the chief minister tough questions.

“I demanded justice from Dhami,” he said. “I asked him why the place where Ankita used to live in the resort was demolished. On whose order was it destroyed? Who were the people to whom she was to give ‘extra service’? When will their names come out? The money the CM gave us is the money of common people. I want justice from the government. We will be satisfied only when these three are given a harsh punishment.”

Why demolish the resort?

Since Ankita’s death, a large group of police officers have been stationed outside the resort. Locals allege that the three accused were “beaten up” by villagers before the police took them away. Locals also set the resort on fire on September 24; the same day, it was partially demolished by a bulldozer.

But who brought in the bulldozer? The chief minister had tweeted about it on September 24, saying “action has been taken by bulldozers on the illegally built resort”.

But different versions played out. On September 28, the district magistrate reiterated that part of the resort was “illegal” and hence it had been demolished by the Yamkeshwar tehsil administration. Yet media reports quoted the assistant engineer of the public works department as saying the JCB was sent by Aarti Gaur, district panchayat member of Umroli.

“I am the panchayat member of that area. Local people called me late at night and told me the JCB is demolishing the report,” she told Newslaundry. “So, I wanted to know who sent it. After that, I called the assistant engineer of PWD. He told me the MLA and sub-divisional magistrate sent it.”

Even if the resort’s construction was “illegal”, why demolish it so swiftly after a crime was committed, even before the investigation took place?

Ankita’s family believe it was done to destroy evidence. Officials involved in the matter refused to speak to this reporter.

The resort where Ankita Bhandari worked.

This report was originally published on Newslaundry Hindi. It was translated to English by Shardool Katyayan. 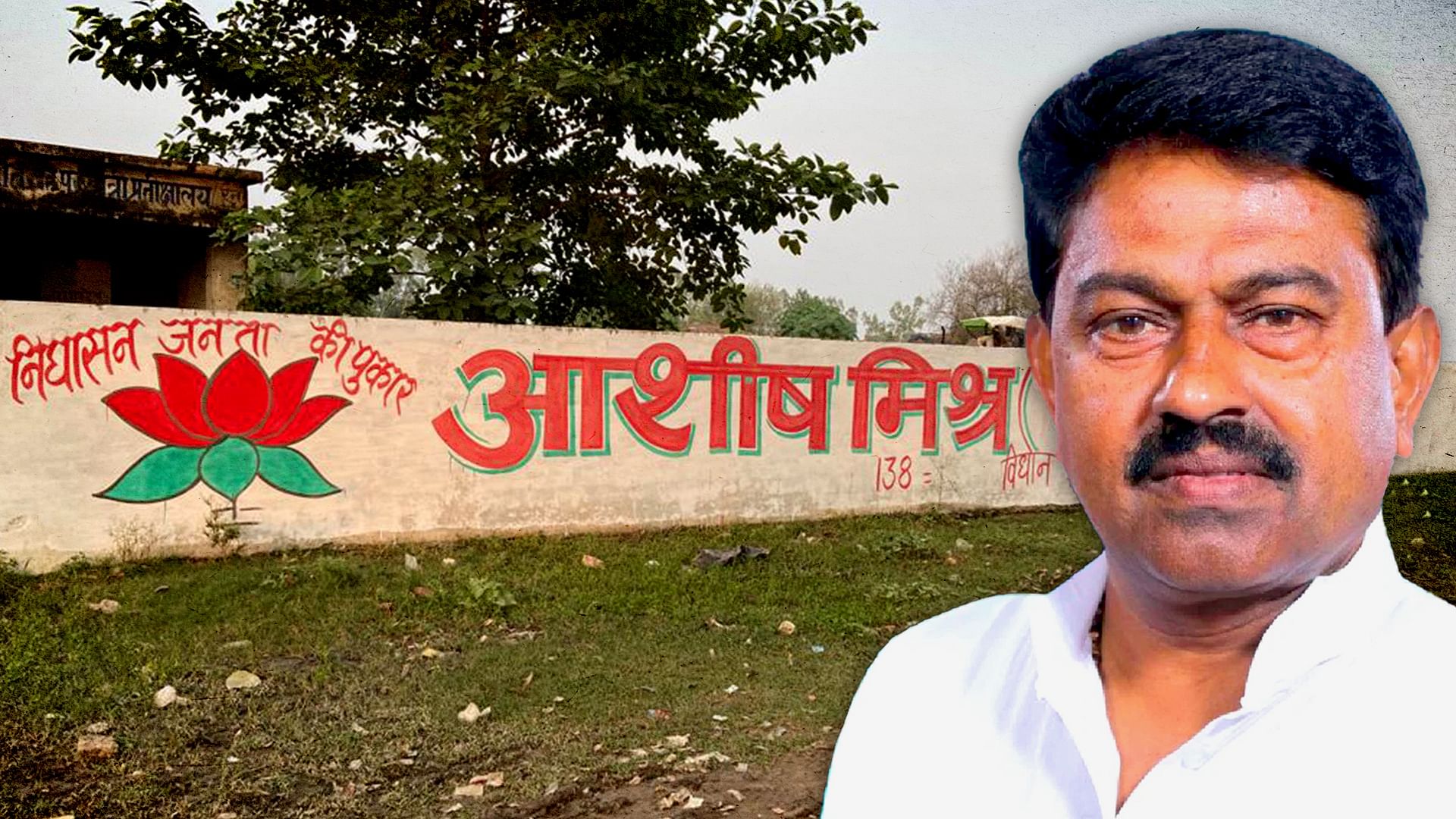