‘If we get Covid, it’s Modi’s fault’: Why farmers at Delhi’s borders aren’t leaving

Most farmers are maskless, though they now have a team of 40 doctors on call. If they leave now, they say, the farm laws will never be repealed.

As the second wave of Covid sweeps the country, it’s been 167 days since thousands of farmers arrived and settled along the borders of New Delhi. For more than five months, the farmers, largely from Punjab and Haryana, have been protesting against the three farm bills passed by the central government in September.

On May 11, Balbir Singh Rajewal, the president of the Bharatiya Kisan Union (Rajewal), told Newslaundry that while it’s difficult to count the number of people presently camped out at the protest sites, about “10,000 farmers” had made their way to Tikri and Singhu borders on May 10, mainly from Haryana and Punjab.

Yet throughout the second wave, Delhi’s three borders – Tikri, Singhu and Ghazipur – have remained choked by the huge numbers of farmers sitting in protest. Though Covid regulations and lockdowns have been imposed in Delhi, Haryana and Punjab, the farmers still travel back and forth between their homes and the protest sites.

Additionally, protests continue in Punjab, organised by the leaders of the 32 farmer unions who have been spearheading the farmers’ movement. On May 5, Rajewal addressed a press conference at Singhu where he urged shopkeepers in Punjab to defy the lockdown and keep their shops open while taking necessary precautions.

While Rajewal said there had been no Covid cases at the protests so far – though there had also been no testing – a 26-year-old woman participating in the Tikri protest died of Covid on April 30. She had arrived at Tikri on April 11 with six others, part of a group called the Kisan Social Army, and began showing Covid symptoms on April 21.

Crucially, after her death, her father said his daughter had told him that she had been gangraped in her tent at Tikri and assaulted in the train on the way there from Bengal. The police have now filed an FIR against six people, including two women who travelled with her.

The protest site has a more permanent air now, with many huts and trolleys having coolers and air conditioners for the summer.

As things stand, the farmers plan to continue their protests indefinitely, Covid or no Covid.

Should the protest have been called off?

On April 4, the Kumbh Mela began in Haridwar. Thousands of people without masks gathered along the banks of the Ganga, making it a fertile ground for the virus to spread further. The BJP government was called out for not cancelling the mela, which has since been described as a “super-spreader” event.

Given the rise in cases and the impossibility of enforcing social distancing norms at crowded protest sites, should the farmer leaders have suspended their protests?

Yesterday, 12 opposition leaders wrote to prime minister Narendra Modi on the Covid surge. Among other things, the letter demanded the repeal of the farm laws, “to protect lakhs of our annadatas becoming victims of the pandemic so that they can continue to produce food to feed the Indian people”. The letter was signed by leaders like Sonia Gandhi, MK Stalin, Sitaram Yechury, Mamata Banerjee, Akhilesh Yadav, and Uddhav Thackeray.

Balbir Singh Rajewal told Newslaundry: “If we go back now, no one is going to care for us and the government will continue with the three laws in place. And if these laws continue, our future is over. So, this is a life and death situation for us.”

He pointed out that the farm bills had been pushed through parliament and passed in the middle of a pandemic. “And now, it has become clear that even in a situation like this, they don’t care if we die of Covid or hunger,” he said. “If the government really cares, why can’t they agree to our demands? Then we will go back immediately.”

But will the farmer leaders hold themselves responsible if protesters die of Covid?

“No,” Rajewal said. “If people here get affected by the virus, it will be Modi’s fault. It will be Amit Shah’s fault. We are not an elected political party. We are farmers asking for our rights.”

Rajewal also said the farmers would welcome vaccination camps being set up at the protest sites. “Why is the government not vaccinating us but expecting us to give up our constitutional right to protest?”

Meanwhile, on April 22, as Delhi began running out of oxygen, Haryana chief minister Manohar Lal Khattar promised to send 170 metric tonnes of oxygen from a Panipat plant. The trucks would have to pass through the Singhu border to reach the capital. Even as the BJP accused the farmers of blocking the route, the Samyukth Kisan Morcha, the umbrella group of farmer leaders, cleared one side of the highway to ensure the free movement of oxygen tankers, ambulance and emergency services.

“We kept our word,” Rajewal said. “No health emergency was slowed down because of our protest. But the Delhi police has put up cement barricades, dug up the roads around our protest and this has definitely made it difficult for vehicles to pass.”

On May 11, a plea was filed in the Supreme Court seeking directions to remove these barricades at Singhu as it was “aggravating distress” and hindering the smooth movement between the two states.

Covid precautions at the protests

In November, when the farmers first arrived in Delhi, the city had just dealt with its first Covid peak. At the time, farmers were not wearing masks at the protest sites or practising social distancing norms. When asked about Covid, most of them had replied, “There is no Covid here.”

It should be noted that in November, a parliamentary panel predicted the second wave of Covid, adding that gaps in India’s oxygen and medicine shortages would have to be plugged to avoid chaos. The central government seems to have ignored the report.

In December, several farmers told Newslaundry that they thought Covid was a form of “propaganda”. Yes, there were a few cases in our village. But what is the fear-mongering of saying a second wave will come?” one protester had said. “Either way, the farmers will die. Either we sit at home and die or at least raise our voices and die.”

Today, trolleys, trucks and huts still stand cheek by jowl at the Singhu protest site. The community kitchens and bathing and washing areas are still functioning, seeing a steady stream of people on an hourly basis. Some farmers wear masks, a few others have cloth wrapped around their faces. But many are maskless.

When we met Rajewal, his own mask hung loosely around his neck. His eight or 10 companions were not wearing masks as well.

Rajewal said it was not possible to socially distance at the protests. “We are living the village life on the roads here,” he said. “We can’t be expected to maintain social distancing.”

Nevertheless, taking into account the second wave, Rajewal said that cold drinks have been banned at Singhu – though there is no scientific backing for this move – and only warm food and drinks are being served. Elderly people are also given Vitamin C and Vitamin D tablets every day. After every langar, farmers are given kadha, a herbal tea that is supposed to boost immunity. This concoction has been recommended multiple times by the government, including Modi, but again there is no scientific basis that it helps with Covid.

“Moreover, we have a team of 40 doctors attending to the protesters,” Rajewal added. “We have 10 oxygen cylinders and 10 beds on standby. If anyone gets fever, we immediately give them medicines to bring it down.”

Where is the protest headed?

During the first three months of the protest, the central government held several rounds of talks with the farmer leaders to arrive at a common ground. The farmers' demand for minimum support price to be written into law and for the three laws to be repealed was rejected by the government. In turn, the farmers refused to relent to the amendments proposed by the government.

Eleven rounds of talks took place in total, between October 14 and January 22. Since then, neither side has met or sought a negotiation.

On April 10, agriculture minister Narendra Singh Tomar said the government was still open to talks with the farmers and urged them to call off the protests.

“It is the government that has run away from the talks,” Rajewal insisted. “We’re always ready for a conversation.”

Meanwhile, he said, the protests will continue indefinitely. “As we have already said, we will sit for another six months or a year if needed,” he said. “One thing is clear: we will never be violent. And when the government is ready to talk, we’ll talk again.”

The site at Singhu has now assumed a more permanent air, as opposed to the temporary homes set up in tractors and trolleys back in November. Now, the farmers have built hut-like structures out of bamboo and bricks. Small solar panels draw energy from the blazing summer sun. Most houses and trolleys even have fans, coolers or air conditioners.

“Some of the protesting farmers have made their own colonies here,” said Rajewal, laughing. “In Tikri, you will find a colony called ‘New California Colony’. In Singhu, there’s one called ‘Zero Kilometre.’” 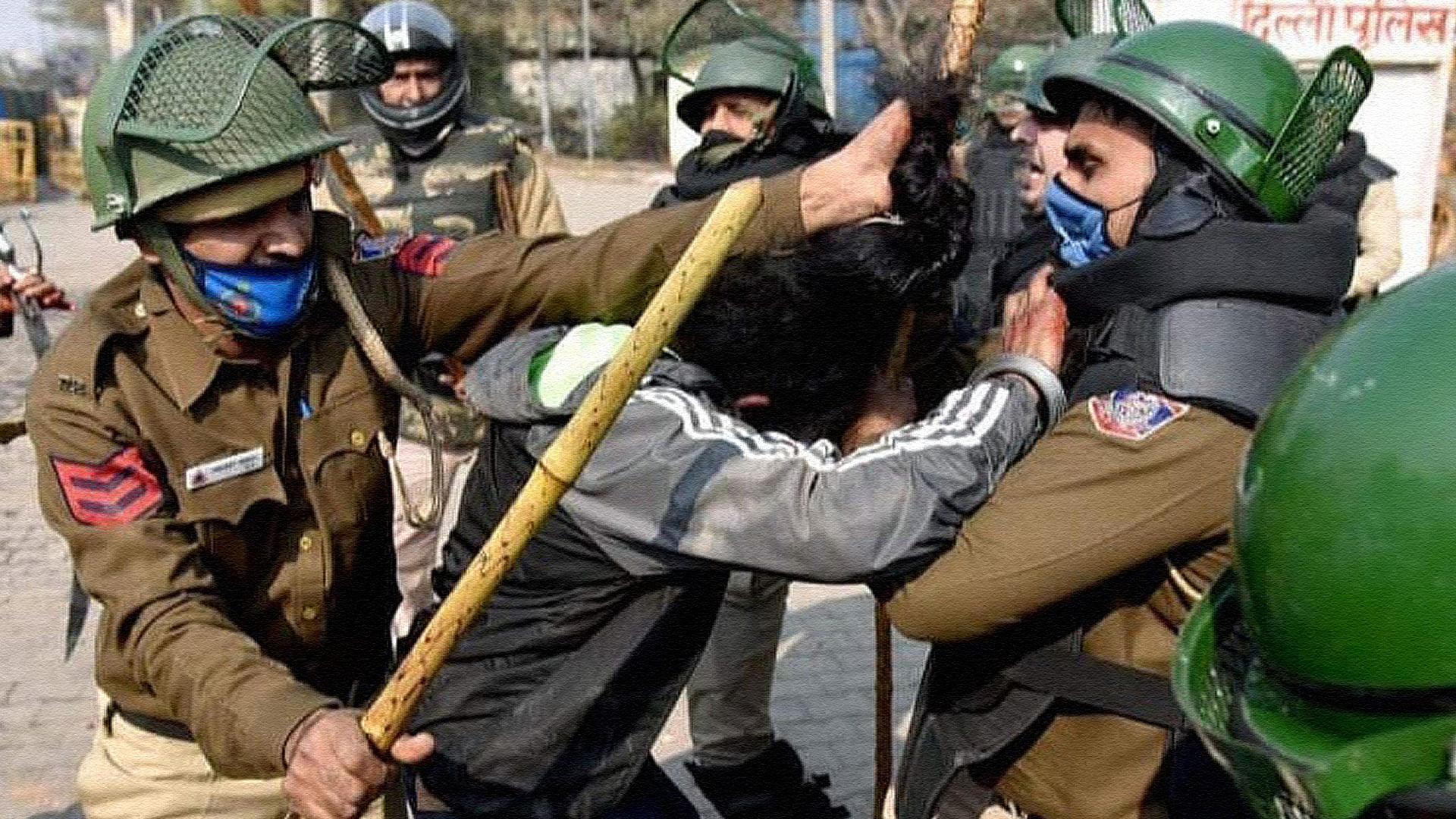