Gorakhpur: Over 40 Covid deaths linked to election duty, but is pandemic a poll issue?

The Adityanath government has patted its back over Covid management but families struggle to move on.

In Gorakhpur, chief minister Yogi Adityanath’s bastion and the BJP’s home turf, campaign posters and flags by political parties dot the cityscape ahead of the assembly polls in nine constituencies in the district on March 3. A hoarding by the city municipal corporation near Deen Dayal University urges voters to come out in large numbers to push the turnout beyond 70 percent as a challenge to Covid.

It seems to be among the rare mentions of the pandemic in poll campaigns in the district, which was in the news last year over the administration’s decision to cover crematoria with asbestos amid alleged discrepancies in the Covid toll.

While the CM has repeatedly praised his government over Covid management, there were allegations of acute oxygen shortage during the second wave last year. The government deployed school teachers on poll duty during panchayat elections, and as deaths due to Covid were reported, it initially refused to admit the same. Newslaundry had reported how the failure to follow distancing norms led to the death of 44 teachers in Gorakhpur, amid an ostensibly crumbling health infrastructure during the second wave.

Amid a campaign that seems to be drifting away from issues related to health, Newslaundry met families of the teachers who died after a Covid infection.

‘Won’t vote for anyone’

“I won’t be voting for anyone, this government made me a widow and brought me to the road. So for us there’s no meaning of government,” says Usha Mishra, 39, who lost her husband Manoj Kumar Mishra to Covid on April 29 last year – 14 days after he had returned from panchayat poll duty. Manoj was employed as assistant teacher at a government school in Gorakhpur’s Lashadi village.

A brown-coloured folder with ‘muqadma record file’ inscribed in black on its cover has now become the centrepiece of her life, and Usha is full of rage. “Wasn’t it their duty to perform tests and make sure that those who had returned from duty are well?”

Usha Mishra holding the photograph of her husband at her house in Deoria.

The folder has letters and applications for compensation; Usha is yet to receive hers despite the UP government announcing financial aid for the families of over 1,600 teachers under pressure from the Primary School Teachers' Association.

Usha’s name was missing from this list. “My mobile was with a nephew and I didn’t know about the online application,” Usha told Newslaundry. Between October and November, she twice wrote to the DM and also to the CM, but did not get a response. In December, while responding to her query on the Jan Sunwai portal, the district panchayati raj officer informed Usha that the deadline for the application was June 15.

Her life has been turned upside down, enrolling her two children at a Hindi school from their English medium school. “I can’t afford their studies now,” she says. “Even the pension I’m getting is gone in repaying loans we had taken,” she says, pointing to a Rs 10 lakh loan taken for the marriage of Manoj’s sister and another 26 lakh for a house in Gorakhpur.

Usha had to withdraw her children's admission from an English-medium school.

‘Difficult to move on’

In Gorakhpur’s Rustampur colony, Aruna Nishad, 35, is trying to hold fort after the death of her husband, Ram Bhajan, who was deployed on panchayat election duty and died of Covid on April 30 last year. Ram, a Shiksha Mitra, was the only breadwinner in the family comprising his wife, three children and parents.

“It is difficult to move on,” says Aruna, who received a compensation of Rs 30 lakh but has been trying to get a job in her husband’s place on grounds of compassion – a norm in government vacancies. “I have three kids and in-laws who need to be taken care of so a permanent job will help us sail through,” says Aruna, whose brother Atul Kumar Nishad has been trying to contact authorities for a job for the 35-year-old.

Aruna Nishad is seeking a job in place of her husband.

“It is not that we are asking for fresh recruitment, all we are demanding is a job for my sister in place of my deceased brother-in-law,” says Atul, who works as a sales executive for Namaste India, a dairy firm. In September 2021, he got a response from Gorakhpur’s Basic Education Department stating that recruitment is not possible under the Sarva Shiksha Abhiyan in the absence of new vacancies.

Atul Nishad has been asking the authorities for a job to his sister on grounds of compassion.

Underlying the situation that Aruna and Atul are fraught with lies the apathy of successive state governments when it comes to the hiring of Shiksha Mitras. As contractual workers, a Shiksha Mitra, often gets paid less than a regular teacher. In Uttar Pradesh, every political party often uses the plank of their regularisation as a bait to earn goodwill of voters.

Ram Bhajan, for instance, had joined as a Shiksha Mitra in 2005 when Mulayam Singh Yadav was the chief minister. In 2012, after coming to power, the Akhilesh Yadav-led government announced regularisation of Shiksha Mitra which meant an increase in pay for contractual workers such as Ram Bhajan. In 2017, however, the Supreme Court quashed the regularisation stating that these contractual positions cannot be converted into government jobs. This meant many such as Ram Bhajan were back to square one – the Adityanath government promised to look into the matter but nothing materialised at the policy level despite protests.

“Even if it's the job of a clerk that’s acceptable to me,” says Aruna, looking forlornly at the bike Ram Bhajan used to ride to school.

Aruna looks at the bike which her husband used to ride to school in Lashadi village.

The lane leading to her residence is lined with houses built under the Pradhan Mantri Awas Yojana with the surnames painted on the walls suggesting it’s a settlement for those from the Nishad community.

The Nishad party, represented by Sanjay Nishad, has entered into an alliance with BJP ahead of the assembly elections. But what is it that concerns Atul and Aruna as voters? “We will vote for someone who is concerned about our issue,” says Aruna. “Covid is definitely an issue for us. The loss is irreplaceable but we expect that the new government focuses on helping us,” adds Atul.

While Covid initially didn’t make much of an appearance in speeches by SP leader Akhilesh Yadav, he recently targeted the Adityanath government over bodies found floating in Ganga last year, at a rally in Prayagraj. He also promised relaxation in the eligibility criteria for government jobs for those hit by Covid. But beyond these statements, the political campaign in Gorakhpur seems to be bereft of a substantive plan on healthcare.

BSP chief Mayawati, on the other hand, has focussed her party’s campaign on issues such as unemployment, law and order, price rise, farmer suicides, etc.

In the 2017 elections, BJP had won eight seats while Chillupar was wrested by the BSP.

In a report card, released in 2021, the Yogi government patted itself on its back by mentioning words of praise from the likes of WHO and leaders from Australia on Covid management.

Months after questions over health infrastructure amid a ravaging second wave, Prime Minister Narendra Modi inaugurated the AIIMS in Gorakhpur in December last year. On February 4, while accompanying CM Yogi Adityanath during filing of nomination, home minister Amit Shah had spelt out each letter in ‘Gorakhpur’, with ‘a’ standing for AIIMS.

But the BRD Medical College remains the city’s largest hospital, though with its own share of controversy.

Anil Kumar Gupta, 61, had one of the worst experiences of his life when he was hospitalised at BRD Medical College during the first Covid wave. “Only I know how I managed to come back alive from there. They only deceived me in the name of treatment,” Anil told Newslaundry.

For more than a week, Anil alleged, he was wrongly administered insulin by hospital staff even though he is not diabetic, and abruptly left the hospital once a doctor on a daily round informed him of the blunder. “In a ward with 46 patients, there were two urinal pots and two stool pots. When I requested them to make an alternate arrangement fearing infection, I was given a bucket.” Anil has filed a complaint of alleged medical negligence and the case is in court.

While physical infrastructure in the city has been revamped, especially the BRD Medical College, activists such as Dr Kafeel Khan point to a shortage of trained staff as well as lack of proper facilities.

BRD Medical College had hit the headlines in 2017 after 63 children due to alleged shortage of oxygen supply. A pediatrician, Dr Kafeel Khan, has been at the receiving end of administration since then for his role, pointing fingers at the state government. In November 2021, the UP government officially terminated the services of Dr Khan.

His brother, Adeel Ahmed Khan, alleged that government fudging of medical data has become a norm, pointing to deaths related to Japanese Encephalitis. “In 2019, for instance, while the local CMO announced only 13 deaths due to Japanese Encephalitis, in reality 1,550 children had died,” says Adeel, who claims to have collected data alleging such malpractice.

But ahead of elections, many local residents continue to believe in MP Adityanath – who is contesting his first assembly election from Gorakhpur – and his ability to “control any crisis”.

The BRD Medical College has been revamped.

“Covid is a natural thing so it’s not an election issue. And the government has performed better,” says Mehfuz Ahmed, a pharmacist.

Mehfuz Ahmed, a pharmacist, thinks Covid is not an election issue.

According to Balram, whose mother is undergoing treatment for cancer, “facilities are available only when you splurge money”. “We will vote for Yogi. It (Covid) was an unprecedented crisis, whatever help one could get, they were offered by the government.”

Balram, a local in Gorakhpur, will vote for BJP as he feels Adityanath managed the Covid crisis well. 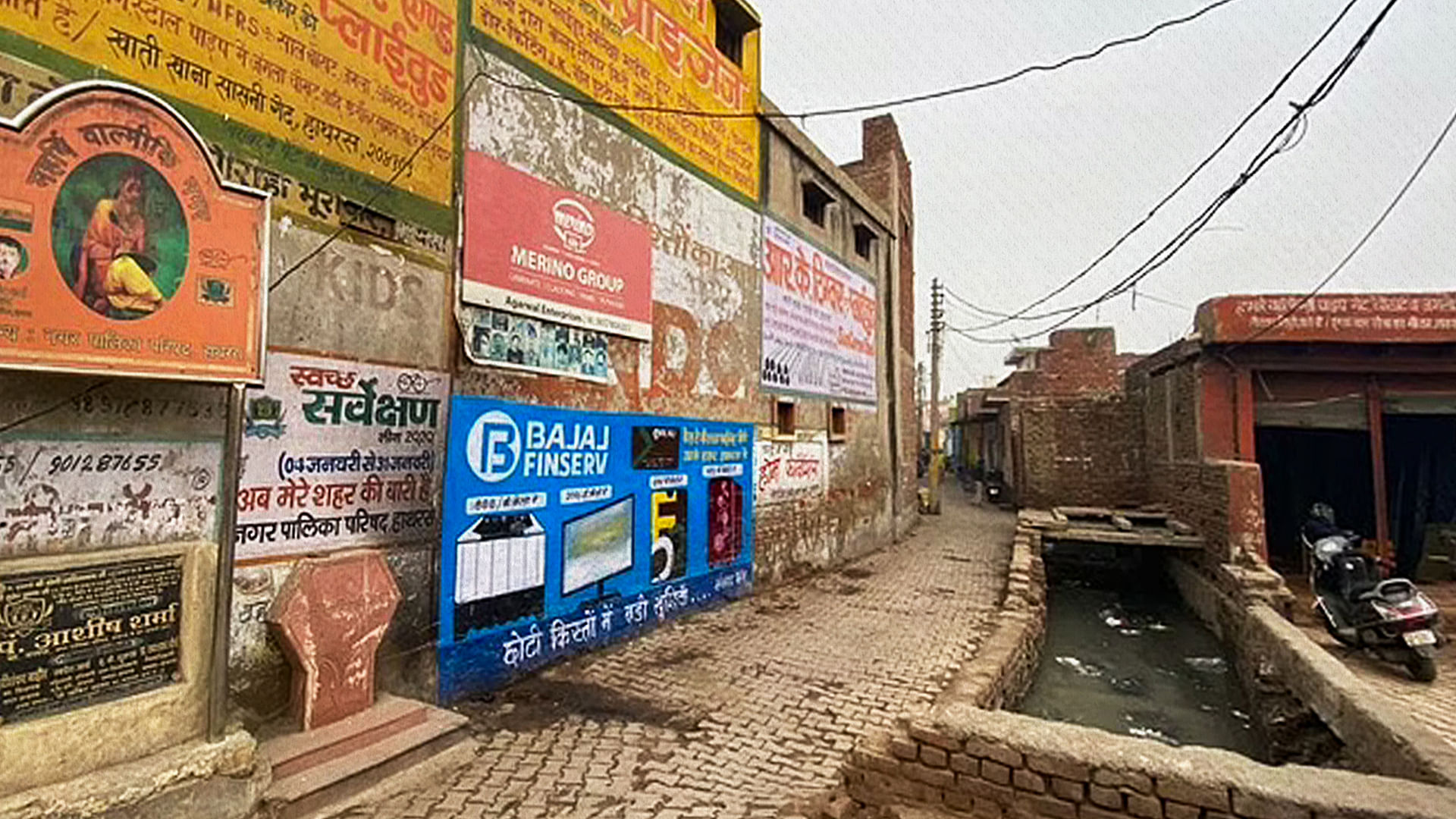 Will Hathras rape case cast a shadow on election in district?