We infiltrated the Telegram groups of the BJP leader’s online network to see what they do and how they operate.

If the ever-growing reality of Hindu Rashtra were one big Christmas, Kapil Mishra would be Santa Claus, and the members of his “Hindu Ecosystem” hardworking elves delivering the gift of religious hatred and bigotry, packaged in the seductive wrapping of Hindutva, to the masses, secretly but methodically.

On November 16 last year, Mishra, a former Aam Aadmi Party minister who is now with the BJP and has been accused of inciting the February 2020 Delhi carnage by the victims and activists, posted a tweet asking whoever was interested to fill in a form and join what he described as the “Hindu Ecosystem” team.

From today we are making a Team - Hindu Ecosystem

Pls fill this membership form to join the team: https://t.co/yqdlxcXzYA

The form is straightforward – seeking such details as name, cellphone number, state and country of residence – but for one standout question. It asks the prospective footsoldier of the Hindu Ecosystem to state their “special area of interest” and, lest it wasn’t clear what that meant, gives a set of examples.

It also asks them to make a “declaration” about joining the group online and/or on the ground. Our curiosity was heightened and, of course, we had to join. We filled in the form and became members of the Telegram group. We were later added to other associated groups.

Thus we came to have a fly-on-the-wall view of how this ecosystem operates, how it creates propaganda material, how it comes up with toxic narratives, and how it manufactures trends across social media platforms to whip up communal hatred and bigotry, and, of course, support for Hindutva. Oh, they also share toolkits, like the one put out by the climate advocate Greta Thunberg to support the farmer protests over which the Delhi police have lodged an FIR, and arrested a young activist named Disha Ravi.

This is the sum of what we found: Kapil Mishra is leading a network of over 20,000 people who are working in an organised fashion to create and spread communal hatred.

On November 27, Misra posted a video for members of his network announcing that their first campaign would begin at 10 am that day, using the hashtag #JoinHinduEcosystem.

He said about 27,000 people had filled in the form and nearly 15,000 people had joined the Telegram group. Additionally, 5,000 people had signed up with the Hindu Ecosystem’s “Twitter team”. No points for guessing what social and gender groups the members came from: going by the usernames they were mostly upper caste Hindu men.

There was even someone impersonating Adityanath, Hindutva mascot and Uttar Pradesh chief minister. Because, why not?

The first campaign was intended to get more people to join by tweeting out “sample tweets” with the given hashtag.

The same day, Mishra announced a parallel campaign to have people subscribe to Organizer and Panchjanya, house journals of Rashtriya Swayamsevak Sangh, the mothership of the multitude of Hindu supremacist organisations and militias called the Sangh Parivar.

Jai Shri Ram to All friends of Hindu Ecosystem

It was just the beginning. The group was soon inundated by a cascade of documents on running large-scale, far-reaching online campaigns to support, promote and “save” Hindutva in an organised fashion.

Spamming away to glory

The Hindu Ecosystem believes in spamming Twitter. Every week, they pick up a theme and do an intensive campaign around it, ready with mass propaganda and a bunch of fake news with bad aesthetics, to push the Hindutva ideology. In fact, in the Telegram group, they have pinned a message highlighting the topics that they will run organized campaigns on.

To understand how sample tweets work, see this document which was shared in the Telegram group. It is full of links such as these:

This is a URL code. Once you click on it you are redirected to Twitter and this happens:

All the ecosystem members need to do is hit “Tweet” and, boom, Twitter spammed! If enough people spam it at the right time, the hashtag starts trending. Just scroll down this trend and you can spot the pattern easily.

There are several such documents in the Telegram group, with detailed instructions on when and how to start posting the tweets. Here’s one on #AntiHinduCAAriots and another on the Delhi carnage:

And here is the result. Thousands and thousands of such tweets were posted.

They don’t just spam Twitter, they also monitor social media to see if they are making any impact. Screenshots are shared about how their posts are doing, with encouragement to push tweets more and spam more.

Aside from sample tweets, resource material and toolkits are often shared in the group. They come with such titles as “Islam News”, “Irresponsible China”, and “Church Speaks”.

What do these documents contain? Here is the one on “Islam News”.

The idea seems to be to supply constant whataboutery ammunition against Christianity, Islam, and China. Because, besides news items, tips are occasionally supplied about how to present a news story.

A key point that is being made to denounce the Greta toolkit as an “international conspiracy” against India is that it contained dates for when to conduct online and offline activities to draw attention to the farmer protests. The Hindu Ecosystem does the same, but where Greta shared one document to support a legitimate cause, Mishra’s group shares multiple documents a day to increase hate towards different minority communities.

In case you are interested in following the future campaigns of the group, they have provided a calendar for March. Enjoy.

Generation of content. Wonder how that works? Well, we can throw some light on that.

Producing journalism like this takes substantial time, effort, and resources. We don’t take ads from governments or corporations and depend on subscriptions to fund our work. For we believe that when the public pays the public is served, when the advertiser pays the advertiser is served. Join the movement to keep news free and independent by subscribing to Newslaundry today.

The Hindu Ecosystem is spread out. The primary group doesn’t allow anyone other than the admins – including Mishra – to post. So, there are associated groups for people to participate. We didn’t even ask for it, but were added to three groups – Prashasak Samiti, or administrative committee with over 33,000 members; Anusheelan Samiti, or review committee, with over 10,000 members; Ram Ram Ji with about 1,900 people.

The Ram Ram Ji group comes with a description that gives an idea of what happens in it. Roughly translated it says: “Exhibitionists are the biggest terrorists. Hindus are being cruelly cut, burned, and killed. You are waiting for your turn.”

The associated groups are used to circulate videos, images, and a lot of OpIndia articles. The material is regularly compiled and made available to all the members. While we were in this group we could see alternate versions of public events being presented and pro-Hindutva narratives being created. We have given a few examples of this below. The sheer scale of this hate-generation is mindblowing.

The commitment and diligence of the members of Hindu Ecosystem is striking. It doesn’t take even minutes after an event takes place for the well-oiled propaganda machine to start churning out material – fake videos, articles, posters, hashtags, mass tweet links – gear up for Twitter storms, and providing absurd alternate realities about whatever they choose.

It is surreal to witness in real time the creation of fake news, so blatantly, so confidently, and so fiercely.

Take Tandav. The web series was released on January 15, and the same day, Mishra urged the members to launch a boycott campaign against it.

This is what followed:

Or, take the Republic Day violence. Just a few minutes after TV news channels got busy reporting that farmers who had organised a tractor march to protest against the new farm laws were “clashing” with the police, the group was flooded with anti-Sikh and “Sikh terror” conspiracy theories, along with shareable material such as posters, videos, and, of course, tweet links like #TerrorAttackOnDelhi.

Remember the “international celebrity conspiracy” that dominated India’s airwaves after Rihanna tweeted in support of the farmer protests on February 2, followed by Mia Khalifa and Greta Thunberg?

These were individual images we spotted, then we saw a compilation of posts.

If you would like to take part in this karya of spreading the Khalistan conspiracy theory, the Hindu Ecosystem has PDF files, running into hundreds of pages, handy. Titled, obvioulsy, “Sikh Terrorism Posts”.

They contain images such as these:

The tone, and indeed purpose, of the posts is to demonize the Sikh community and show that they are “terrorists” by linking them to the phantom of Khalistan, and, as a bonus, demonize Muslims in the process. The posts are shared in the Telegram group and are available for the members to download.

This one document is truly endless. And there are three of them.

There are also state-wise and area-wise categorised PDF files of “mosques built by destroying Hindu temples”.

All this may seem like buffoonery by a bunch of very online people. But remember that such material appeals to a scarily and increasingly large section of the Indian society that believes, and is consistently reminded, that “Hindu khatre mein hain”. Hindus are in danger.

As of publishing this story, we have exited all the groups as our journalistic fly-on-the-wall purpose has been achieved.

If you don’t yet fully grasp the gravity of what’s being done through groups such as the Hindu Ecosystem, allow us to spell it out: they are fountains of misinformation, propaganda, directed hatred. They create and spread, in an organised way, Hindu supremacist and anti-minority bile, and incite communal hatred.

We joined Kapil Mishra’s group without expectation, only to witness a factory of hate and propaganda operating in real time. Over 20,000 people are working in a coordinated way to incite communal hatred; it doesn’t matter what event pops up on their radar they quickly give it a hateful spin and turn it into a conspiracy theory, complete with readily shareable images, videos, and forwards to tap into the hate-network effect.

As we were about to exit the group, we saw the hate factory begin circulating a video that purportedly shows a mob attacking a house as the Delhi police stand by.

A post shared in the group claims the home belongs to the person who allegedly killed Rinku Sharma in Delhi’s Mangolpuri. The police have maintained that Sharma’s death was linked to a failed business venture, but the Hindutva camp has been painting it as a communal killing by Muslims.

This is not over. 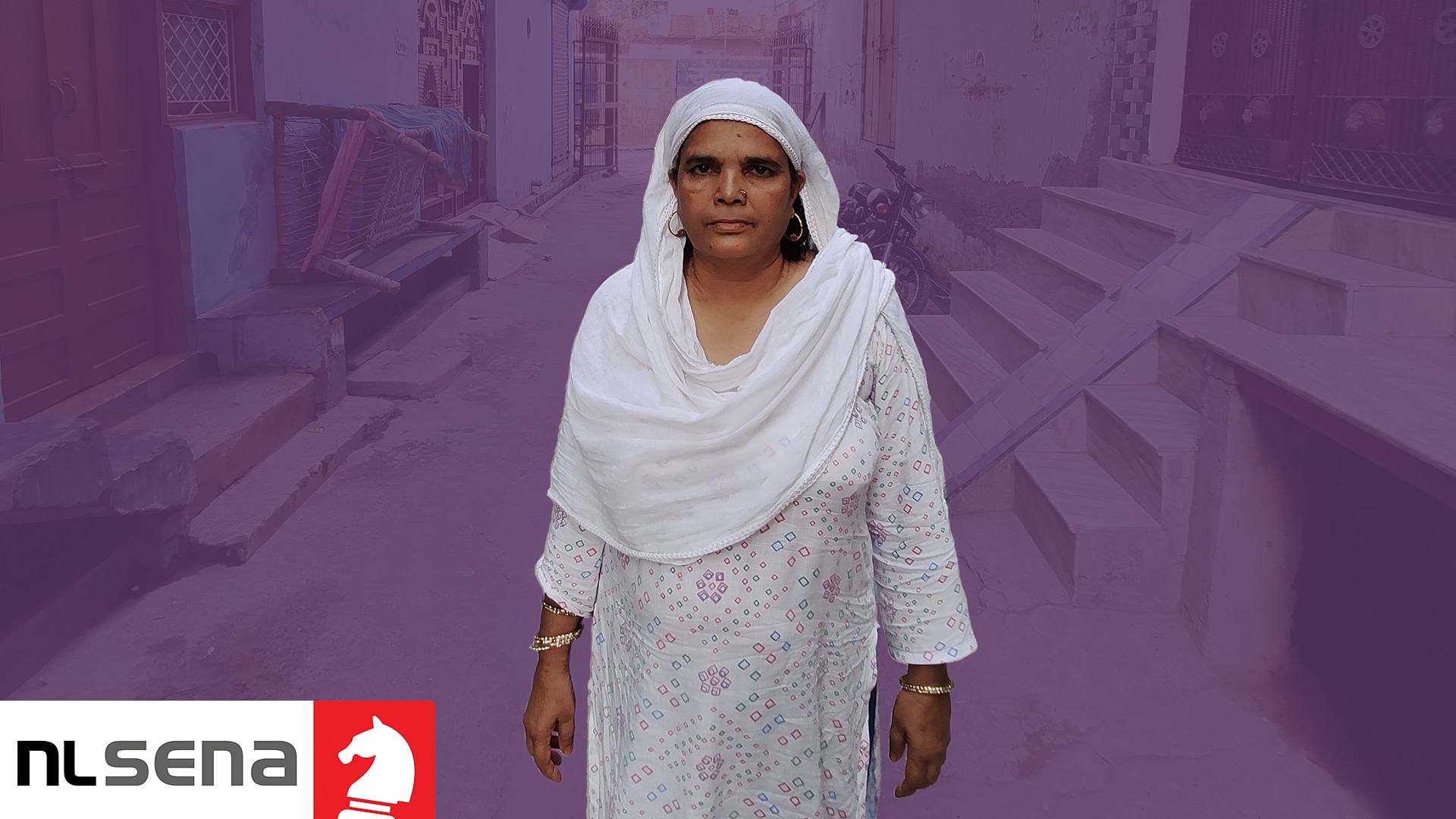