TMC flags on a BJP office: The story of why BJP is imploding in Howrah

It took an entire day to find a BJP office that was ‘laying low’ in Domjur.

Our story begins in Kolkata.

We landed at 1 pm on Tuesday and were trying to figure out what rallies are happening in and around the city. We heard of a massive protest at Hastings, where the Bharatiya Janata Party’s headquarters is located.

The workers gathered there were unhappy, to put it mildly. They were upset about the BJP’s distribution of tickets for the upcoming Assembly election – an issue that has seen the former Kolkata mayor quitting and protests across the state. Home minister Amit Shah cut short his trip in poll-bound Assam to come to Kolkata and sort things out.

Outside the BJP’s office, BJP karyakartas told us that the party’s top leadership was huddled on the seventh floor figuring things out. The workers had cordoned off the entrance, not allowing them to leave until they received some answers.

#ElectionsWithNL | BJP Hastings office in Kolkata was the site of protest yesterday with workers stating how upset they are with the party's ticket distribution favouring former TMC leaders. #WestBengalElections pic.twitter.com/fpTEv33G0s

Newslaundry gathered that those protesting were from Howrah district. They had made their way to Hastings in buses and trucks to make their demands heard. As we talked to them, a BJP leader walked out of a building. Someone flung a rock at him but it hit a policeman standing nearby.

All hell broke loose. The Kolkata police hit the protesters with lathis and swiftly cleared the area.

#ElectionsWithNL | Protesters hurled rocks at BJP leader Abhijit Das (Bobby) while he was coming out of the party's Hastings HQ. It hit a policeman stationed and led to a confrontation.@MnshaP and @Memeghnad reporting from West Bengal. #WestBengalElections pic.twitter.com/qcja9nUEQ6

The BJP headquarters at Hastings.

But what led to this anger?

For the uninitiated, Howrah district comprises 16 Assembly constituencies. The election will take place here in two phases, on April 6 and April 10. Party workers at Hastings told us they’d come from eight of these constituencies because they were upset with the candidates chosen to receive tickets.

The names of three BJP candidates cropped up several times: Mohit Ghati from Panchla constituency, Rajib Banerjee from Domjur, and Sumit Ranjan Karar from Udaynarayanpur. All three have something else in common: shortly before the election, they defected from other parties to join the BJP and were rewarded with tickets.

Newslaundry went to Panchla and Domjur to find out more.

At the BJP office in Panchla, we were greeted by shuttered doors. Santu Khatua, a local, told us he has worked with the BJP since the late 1990s.

“We were at Hastings and were protesting for two days,” Khatua said.”Some 100-150 workers from this constituency went there to tell the leadership that we are not happy with Mohit Ghati’s nomination.”

Mohit Ghati, we learned, has a history of jumping parties before elections.

“He joined the BJP one and a half months ago. He left the Trinamool Congress for the BJP,” Khatua explained. Other locals filled us in on Ghati’s history: he had been a TMC member in 2011 before quitting and contesting the election as an independent. In 2012, he joined the Congress. In 2015, he quit the Congress and joined the BJP. In 2016, he returned to the TMC. Now, in 2021, he’s back with the saffron party.

Kaushik Kole, a BJP worker in Panchla, said party workers are upset because Ghati and his followers “assaulted” BJP workers multiple times when he was a member of the TMC.

“How are we supposed to ask people to vote for a man who beat us black and blue in the past?” Kole said. “All of us BJP workers here have been terrorised by his goons for years.”

We then entered the BJP office and were told it had been vandalised a few days before by angry party workers.

“The grief was too much to handle,” Khatua said. “Angry karyakartas came and vandalised the office. It has been shut ever since. Now, we have completely stopped campaigning for the BJP. What face are we supposed to show in public? It’s embarrassing.”

Across the street from the BJP office, a small group of BJP workers were gathered at a tea stall. They were from Sankrail constituency, they said, and while they like their BJP candidate Prabhakar Pandit, they have their own issues with Ghati.

Torn posters at the BJP office in Panchla.

“Before the candidate list was announced, we were all campaigning together,” said Anjan Khada, who has been a BJP worker for a long time. “Panchla and Sankrail karyakartas would help each other out. Now, we’ve stopped campaigning in Panchla altogether.”

Khada said Ghati is a “career criminal” who runs “shady” businesses in the area.

“Everyone knows that he deals in drugs and prostitution, and runs gambling dens,” Khada claimed. “Everyone here knows that he is a part of the land mafia. What the BJP did by giving him a ticket is wrong.”

Domjur is around 25 km from Panchla. We searched for the BJP office, moving from small lanes to even smaller lanes, but to no avail. We looked out for BJP flags to show us the way, but saw none. When we finally identified the house of a karyakarta, he wasn’t home, so our quest continued.

Finally, a passerby directed us to Begdi, about 10 km away. Here, the owner of a biryani stall told us the BJP office was shut. He telephoned a BJP worker who arrived and confirmed that the office was closed. This person suggested that we meet the BJP candidate from Domjur, Rajib Banerjee, whose office was 20 km away. Banerjee quit the TMC in January and joined the BJP.

Off we went, but this office was closed too.

Three hours and four e-rickshaw rides later, we wound up at a semi-residential area near Salap bridge. Banerjee sits in the office here, we were told with great certainty, and were then pointed towards the TMC office. Clearly the news hadn’t trickled down that Banerjee had quit the party for the BJP.

The TMC office could not help us with Banerjee’s location. As we wondered what to do, a passerby told us that a building in front of the TMC office, whose compound was lined with TMC flags, was actually Banerjee’s new BJP office.

Confused? So were we. This is what the office looked like.

Rajib Banerjee's new office with TMC flags on its wall.

The TMC office across the road from Rajib Banerjee's BJP office.

Three sleepy men in the building confirmed that this was Banerjee’s office. “We are not locals,” one of them said, refusing to reveal his name. “We are all from Bihar. We came with Amit Shah and are a part of his team.”

Could we speak to the candidate? “He’s in Delhi,” the man said. “He just got nominated so he’s yet to come here.”

But why were there TMC flags outside? Where were the BJP flags? The men said they were “laying low”.

“TMC people are goons,” said one of them. “We are outsiders and don’t understand Bengal politics. But we know how violent things can get here. If they ask us to put a flagpole with the TMC flag on it, we’ll do that too. We have no system here, no cadres here. Better to lay low.”

So, a day-long expedition to find out why BJP workers were angry enough to literally throw stones at their own leaders turned into an exposition on how the BJP is struggling in Howrah. The story also presents a snapshot of what West Bengal politics has come to this Assembly elections: MLAs have indulged in some serious party-hopping and it’s hard for party workers to keep track, let alone the voters. 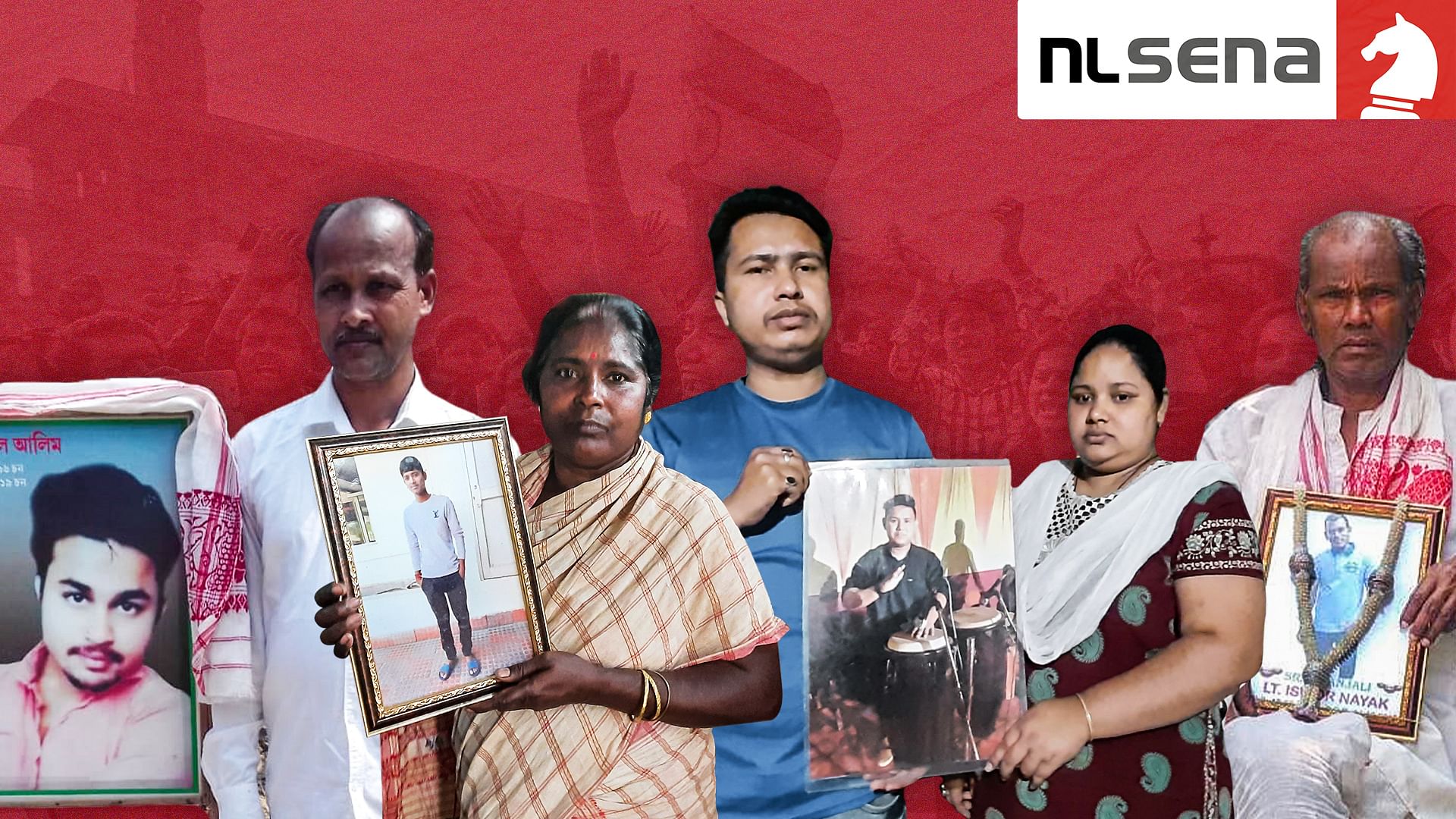 BJP’s betrayal: Families of Assam's 'CAA martyrs’ are banking on the Congress alliance