The Yogi Who Has It All

How Ramdev’s Patanjali took control of Dalit lands in Haridwar

The conglomerate allegedly took over land that it wasn’t allowed to buy legally, and set up herb farms and cow shelters on it.

Nearly five decades ago, every Dalit family in Teliwala village of Uttarakhand’s Haridwar district was granted six bighas of farm plots on lease as part of a land reform. But most of that land is now under Patanjali’s control. The Dalits are mostly landless – either working for Ramdev’s corporate giant or migrating to earn a living.

Patanjali hasn’t technically bought the land. That’s not legally possible in Teliwala village, around 20 km from Haridwar and home to 1,500 Dalit voters, because of the strict land laws enacted in undivided Uttar Pradesh following the abolition of zamindari.

The laws lay down that the Dalits can transfer their lands only to other Dalits, with an exemption for those owning plots larger than 18 bighas, but even that needs special permission from the district or sub-divisional magistrate along with a modification of the land use in government records.

But Patanjali and its associates outsmarted these rules, it is alleged, with the conglomerate using its clout and capital to transfer, sell and resell nearly 600 bighas of land through “donation” deeds and registries in the name of Dalit villagers between 2005 and 2010. Patanjali has since used this land to farm medicinal herbs and sugarcane, and maintain cow shelters, allege villagers.

The modus operandi, the villagers told Newslaundry, was simple. Patanjali’s alleged associates offered money to many Dalit families to let the company use their land without transferring ownership, which they anyway couldn’t do. The easy cash, in turn, allowed many villagers to buy land in the names of their family members and, in some cases, their drivers and servants. Those who refused were allegedly pressured to get on with the programme.

Besides individual farms, the conglomerate also allegedly tried to acquire hundreds of bighas of gram panchayat land but didn’t succeed because of resistance from villagers in places such as Aurangabad and Teliwala.

The individual transfers were smooth in places such as Teliwala, where many villagers claimed that the previous patwari Gulab Singh and former pradhan Kuradi Singh helped Patanjali negotiate many registries.

Mahendra Singh, 52, told Newslaundry that he indirectly bought 100 bighas from other Dalit families for Patanjali – through himself, his wife, his brother Phool Singh, his son Ankit Kumar, and his driver Pramod Kumar. And all this land, he claimed, was eventually resold to Amar Singh, the uncle of Gulab Singh, “who was Ramdev’s man” and knew about each land plot as the patwari.

“A senior worker of Patanjali, Devendra Chowdhary, had come to me. He said, ‘Get some land transferred in your name. We will provide the money, just the name will be yours.’ Chowdhary used to give cash to those who sold their land,” Mahendra alleged.

As per land records, Mahendra and his family bought and sold plots and signed agreements 18 times in 2008, seven times in 2007 and 21 times in 2009. Each plot usually ended up only with people allegedly trusted by Patanjali, such as Gulab and Amar Singh.

“Ramdev or Balkrishna never came for these matters. Devendra and Pankaj would do all this. Gulab Singh would give them information about lands and Pankaj was the one who gave money,” Mahendra alleged.

Mahendra claimed that he incurred losses when he took a loan to buy land which was never repurchased by Patanjali in 2009.

Jan Mohammad, the pradhan of Teliwala, alleged, “Mahendra Singh, Kuradi, his son Arjun, and Mursalin, along with many other people, bought land for Ramdev. Patanjali’s people used to provide the money. The land would be in the name of a Dalit but Patanjali actually possessed it. Land was also taken from some people in the name of charity but money was paid for it.”

Hari Singh, an elderly villager, claimed 80 percent of the Dalits in Teliwala were landless now. “Between 2005 and 2010, a lot of land was sold in our village. The land mafia was stationed in our village. If someone didn’t agree to sell their land, they would be lured and pressured in various ways.”

The middlemen and their families

The references to Devendra and Pankaj grew as Newslaundry met more villagers, such as Devendra Kumar, who mentioned these names as he talked about buying 35 bighas in his, his wife Mamta Rani and his mother Premwati’s names. “Gulab Singh had said that land was needed for Swamiji’s trust,” he said, referring to Ramdev. “I kept getting land owned by Dalits in the village transferred to my name on his request.”

There are also allegations of Patanjali using other fraudulent means to obtain land.

Three days after Kuradi’s death in 2009, Gulab approached his family to pressure them to transfer the former pradhan’s lands to the patwari’s aides, according to Kuradi’s sons Arjun and Teluram, who now rent out JCB earthmovers for a living.

“I don’t know for whom my father bought that land. But after three days of his death, Gulab Singh came to our home and said that his lands were in my father’s name and asked us to return them,” claimed Arjun.

However, Arjun claimed that even though he agreed to transfer the lands back to Patanjali through Sompal, a resident of Dhenupura village who died this year, the firm’s associates tried to acquire more through fraud. “The deal negotiated with Patanjali was to sell 8 bighas of land. But when we went to sell it, they got 28 bighas transferred of which 8 bighas were sold via registry and 20 bighas were donated. They cheated us. We’re not that rich to donate 20 bighas of land. We went to court against this. Eight bighas went to them but there’s a stay on 20 bighas which is under our control. The case is sub judice. One Raju Verma comes to represent Patanjali whenever there’s a hearing.”

Raju Verma, a lawyer representing Patanjali in at least 20 land disputes in Haridwar, was also a witness for Sompal in the land deed involving Arjun. In a conversation with Newslaundry, he initially accepted that the land was bought for Patanjali but later changed his statement. “Sompal came here to buy land. He needed a witness. He asked me so I did.”

Sompal’s son Pranesh Kumar, an Uttarakhand police constable, said he was not aware of the particular episode involving Arjun’s family but a few plots were purchased in his father’s name from the Dalit families around Patanjali’s food park near Dhenupura. “People of other castes used to buy land belonging to Dalits in his name. He enjoyed drinking so he used to take money to drink for getting lands transferred in his name. We don’t have an inch except for the land we inherited. You can get this investigated whenever you want,” he told Newslaundry.

When Newslaundry met Devendra Chowdhary, he claimed to earn a livelihood through mining activity and denied any such land deals or his role in the same. “Why would I buy land? What have I got to do with it? I am busy with my own work.” He also denied that he knew anyone in Teliwala except Gulab Singh. While Verma mentioned that he met Chowdhary several times and provided his address, the latter asserted that he didn’t know him either.

Some transfers allegedly came about through force.

Shyam Singh, a 42-year-old villager in Teliwala, alleged, “The people who didn’t sell their land to Patanjali were compelled to sell it. Imagine, I had my field in the middle of Patanjali’s land. They put up a fence encircling my land…all the paths were closed. People had no choice but to sell their land.”

In a 2011 report titled “Yog se Udyog”, Tehelka reported that a senior officer, during an inspection of the Patanjali food park in Padartha, noticed a field ready to be harvested in the middle of the facility and asked who owned the crops. “The land belongs to some inept farmers who aren’t ready to sell. But where’d they go, they’ll get tired and fall to our feet,” Patanjali founder and Ramdev’s deputy Acharya Balkrishna was quoted as saying.

Besides the individual transfers, nearly 600 bighas of gram panchayat land in Teliwala was also set to be donated to Patanjali in 2008, with then pradhan Ashok Saini writing to the Haridwar district magistrate to express “no objection” to such a transfer, according to an RTI document obtained by Hari Singh, a villager who was among many who resisted this move.

The donation couldn’t succeed because no gram sabha member was consulted about the transfer, which Saini had claimed the village committee happily agreed to.

Incumbent pradhan Jan Mohammad, who was among those who resisted the proposed transfer, alleged, “Ashok Saini himself decided to donate the land to Patanjali. He couldn’t have done it without money exchanging hands…the land is still with the gram sabha.”

However, Saini alleged that it was former pradhan Kuradi who forged his signature on the letter.

But before the transfer could be formalised, the villagers came to know about it.

Hari Singh claimed that they called a gram sabha meeting “the moment we found out and prepared an affidavit stating that we don’t want to give our land to Patanjali”.

A similar battle was waged by residents of Aurangabad village, where Patanjali tried to acquire nearly 1,650 bighas the same year. They managed to stop the transfer but a few other plots allegedly remained occupied.

“We saved hundreds of bighas of land belonging to gram sabha, but Patanjali still occupies about 150 bighas of land. It has built its yog ashram in this village. The land doesn’t belong to Patanjali,” alleged Charan Singh Chauhan, who was a member of the panchayat when it resisted the transfer.

“The government’s officers came, saw the empty land and wrote that it could be given to Patanjali. The administration wrote us a letter informing us that the land was being given to Patanjali. I was a member of the region’s panchayat at the time. Our gram sabha clearly refused to give the land.”

In Aurangabad, several banners point to a Patanjali Yoggram built on 150 bighas that once belonged to the gram sabha. But many villagers have now chosen silence, just like most journalists in Haridwar. When that silence breaks, the local media sings only paeans for the conglomerate with Patanjali ad money ostensibly sloshing through their coffers.

As a member of the press club in Haridwar said, “Even if we write or make a video report, the editors won’t run it. We know all about the baba and his followers, but why become enemies by writing? Everyone is silent.”

Newslaundry sent a questionnaire to the Patanjali PRO about the alleged control of Dalit land in violation of the law, the alleged role played by Gulab, Kuradi, Devendra and Pankaj, and the alleged attempts to acquire gram sabha land in Aurangabad and Teliwala. This report will be updated if we receive a response.

The third part of this series looks into government support for Patanjali’s Coronil. 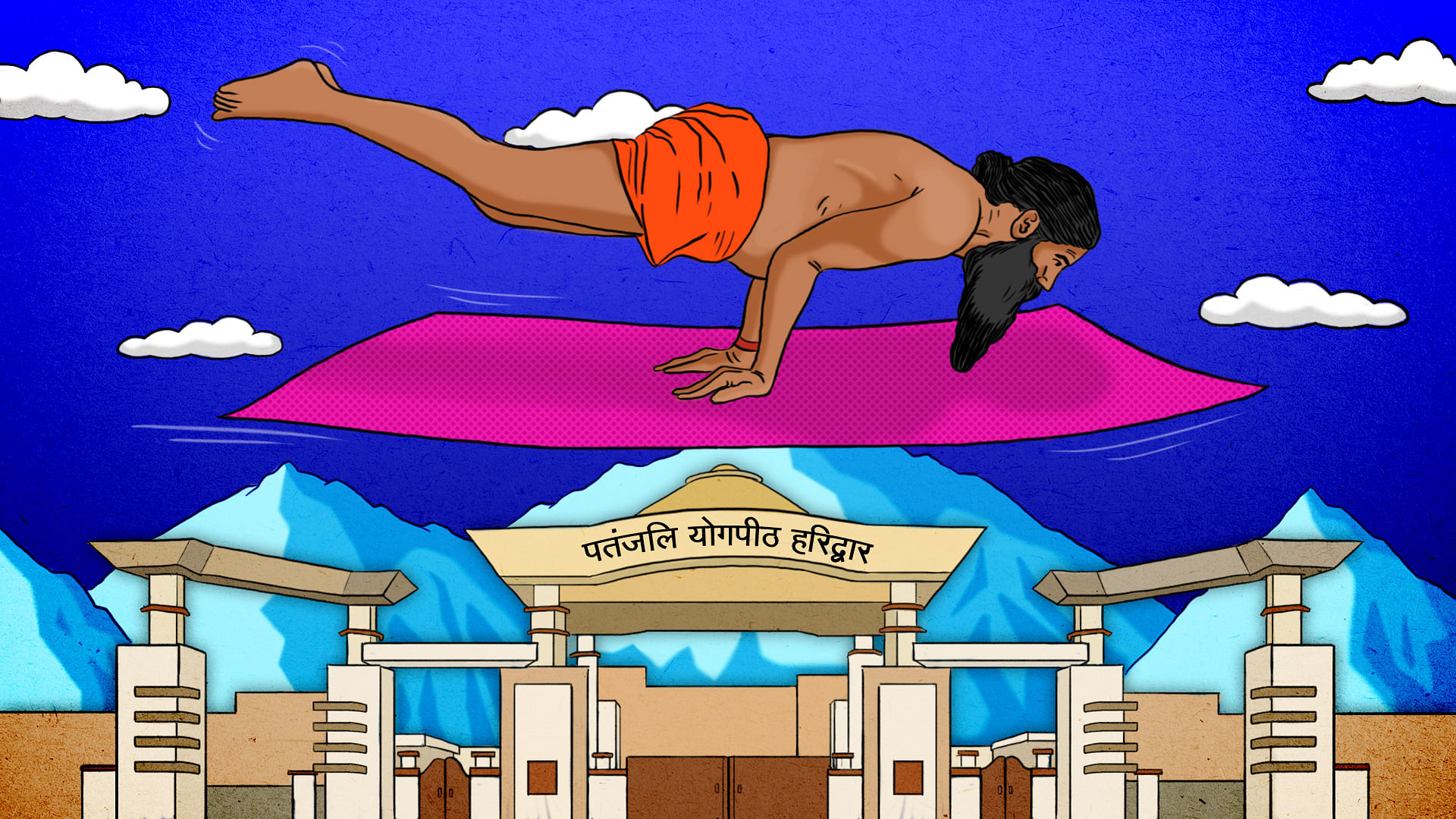 From Ramkishan Yadav to Swami Ramdev, through enterprise and ‘nepotism’